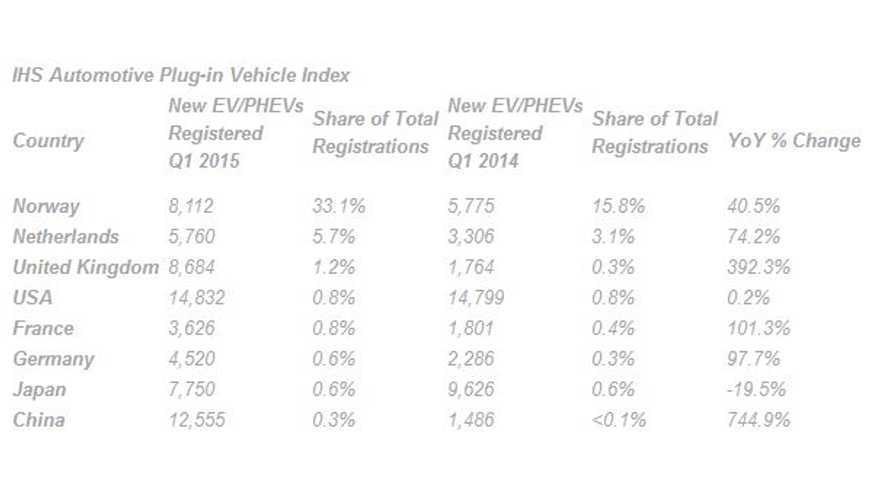 According to IHS Automotive, Norway, the Netherlands and the UK are the top 3 countries in terms of plug-in electric car market share for Q1 2015.

In a press release, IHS states:

"Norway continues to lead the global electric vehicle/plug-in hybrid vehicle (EV/PHEV) market, according to recent analysis by IHS Automotive, a global provider of critical information and insight to the automotive industry and part of IHS Inc."

"In first quarter 2015, Norway ranked first on the new IHS Automotive Plug-in Electric Vehicle Index, which ranks the market share of plug-in electric vehicle (EV) and plug-in hybrid electric vehicle (PHEV) registrations in a given quarter for eight countries. With EV/PHEVs representing one third of new vehicles registered in Norway during the first quarter of this year, Norway leads the first quarter rankings with just over 8,000 units, and achieved a 41 percent increase in volume over the same period in 2014. No import taxes on EVs, among other incentives, have made these vehicles a viable alternative to internal combustion engine (ICE) vehicles in Norway. The Volkswagen e-Golf was the dominant model among consumers in Norway during the first quarter, the analysis says."

Though Norway is number 1 in market share, its small population means that it has no chance at being #1 in volume of sales.  That honor goes to the U.S., followed closely by China:

"While the federal tax credit in the U.S. of up to $7,500 USD for plug-in electric vehicles is continuing to encourage sales across the country, the adoption of these vehicles has been uneven, as consumer consideration and choice has skewed in favor of states offering additional incentives, like the Clean Vehicle Rebate Project in California or Georgia's Zero Emission Vehicle Tax Credit," said Ben Scott, senior analyst - IHS Automotive. "In addition, low fuel pump prices are adversely influencing EV/PHEV purchases among U.S. consumers."

Market share for EV/PHEVs in the U.S. remains low, with these vehicles accounting for just .8 percent of the market during the quarter, according to IHS. Based on volume, the most popular EV/PHEV in the U.S. is the Tesla Model S.

In China, government incentives available support EV and PHEV ownership. Between the first quarter last year and the same timeframe this year, the number of EV/PHEV registrations in China rose by nearly 750 percent. However, these vehicles continue to represent a very small percentage of the overall market in China – just .3 percent, indicating that further incentives may need to be considered to increase consumer acceptance. The most popular plug-in vehicle in Q1 2015 in China is the BYD Qin PHEV. The United Kingdom also had impressive growth of 392 percent for plug-in vehicles between Q1 2014 and Q1 2015.

Other countries do not offer the same advantages for consumers. As an example, in Germany, there aren't many appealing incentives for consumers to make EV/PHEVs a compelling alternative to internal combustion vehicles. Although plug-in vehicle registrations in Germany increased by 98 percent between Q1 2014 and Q1 2015, the increase comes from a small base.

Many of the plug-in vehicles registered in Germany during the timeframe were electrified variants on traditional internal combustion engine (ICE) models. Popular vehicles include the Volkswagen Golf GTE PHEV and Audi A3 PHEV. Germany is considering further incentives on plug-in electric vehicles to support future adoption. Interestingly, France had similar growth to Germany over the same period, yet offers more incentives on plug-in electric vehicles. This is an example of incentives not having the desired effect to catalyze the uptake of these types of vehicle.

Lastly, Japan is the only country to have a negative year over year percentage change. This is likely due to some EV incentives ending between this period and Japanese consumer preference towards HEVs (hybrid electric vehicles without a plug) over PHEVs.