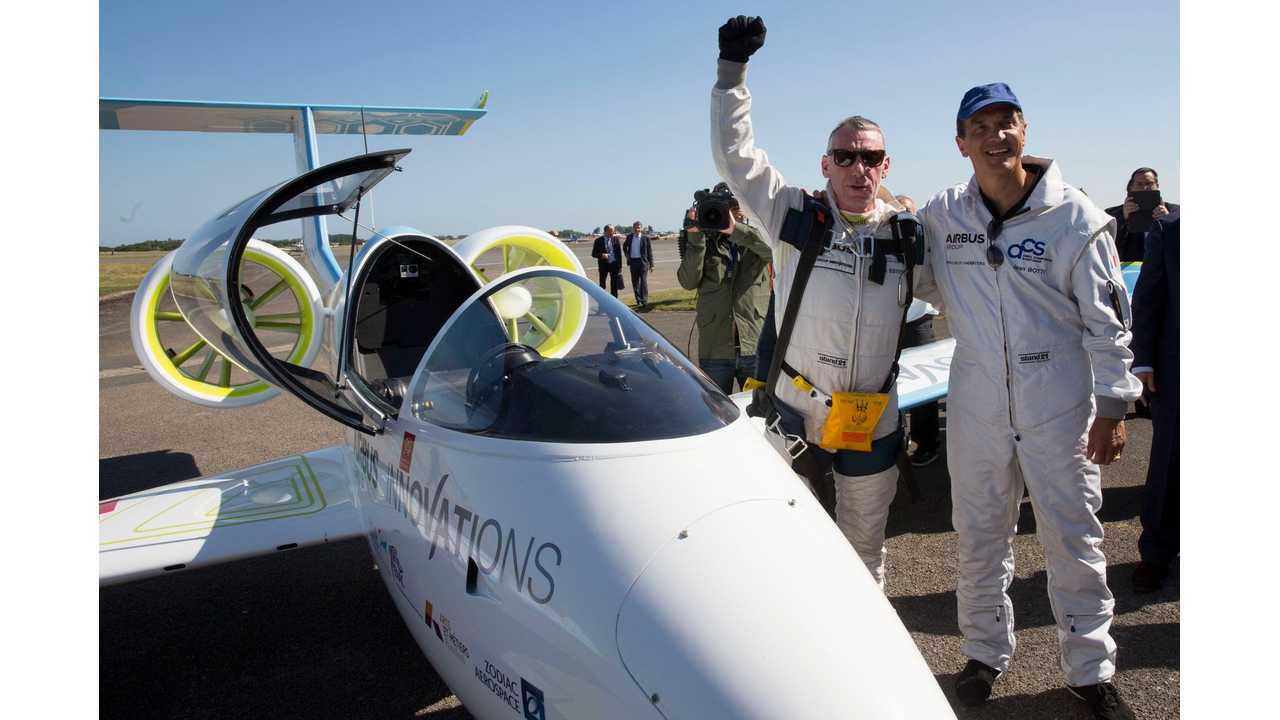 The all electric aircraft E-Fan

"Louis Blériot was one of the most famous aviation pioneers of his time. He performed the Channel crossing on 25 July 1909 in his Blériot XI, an aircraft that not only became the record–breaking aeroplane of 1909 and 1910, but also the first aircraft to be put into mass production and launch France’s aviation industry. Bleriot’s company was based in Suresnes, near Paris, at the same site where part of the E-Fan team is now located."

E-Fan is an electric aircraft that Airbus Group intends to produce from 2017. The prototype got more battery capacity before the flight of just 74 kilometres (46 miles) between Lydd, England, and Calais in France. Journey took 36 minutes - within its 1 hour of range.

"The E-Fan is powered by lithium-ion batteries, which offer an increased battery capacity of 60 percent compared to the aircraft’s original configuration. Flown by test pilot Didier Esteyne, the E-Fan weighs around 600 kilogrammes and travelled at a maximum altitude of about 1,000 metres ."

“The E-Fan project and today’s historic Channel crossing show that the pioneering spirit and ingenuity demonstrated by Louis Blériot and the other early aviators is still alive today. The 10th of July 2015 will now join the list of famous days in aviation history and I’m sure Blériot would be proud of this achievement. We continue to embody the spirit of innovation and tackle technical challenges which both advance aerospace as we know it today and pioneer the next generation of electric and hybrid flight.”

But this is not the whole story. As you can find on Autoblog, Hugues Duval beat Airbus in the flight across the English Channel by one day! And he did the flight to England and back to France, while E-Fan went to England in boxes and then flew back.

"Yesterday, Duval beat the big-budgeted effort to the Channel-crossing punch, making the trip in his trusty converted Colomban Cri-Cri, and landing at Saint-Inglevert Airfield, near Calais, at 7:42 PM local time. Already in possession of a permanent Permit to Fly, all he needed to do to make the trip was file a flight plan, something which was done with an amount of secrecy to prevent any possible interference."

There was also another company, Slovenian aircraft maker Pipistrel, which was ready to do the flight on July 7, but Siemens banned the use of its motor (as we later found out, Siemens provides motors for Airbus)!

We are amazed by what Siemens did to Pipistrel, a company that entered the EV business prior to Airbus:

"On Sunday 5. July in the afternoon we received by mail a letter signed by Dr. Frank Anton, head of e-Aircraft at Siemens, and by Mr. Tim Grage, Commercial Head of e-Aircraft, saying:

"Our Motor in its current version is neither designed, nor tested, nor approved by us for a flight above water - we explicitly prohibit you to use or let anyone else use our Motor for any flight above water." The letter went on to say:

"In the event you do not inform us immediately about the location of the Motor and hand it back to us, we will take any further necessary legal steps to stop any planned flight."