Venturi Will Be Back On The Salt Flats This Summer 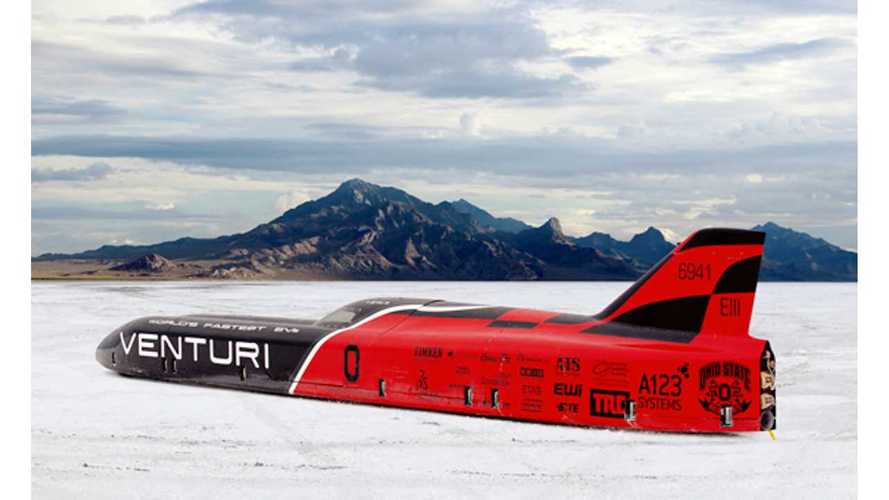 After two years (2013 and 2014) of bad luck with weather, Venturi VBB-3 finally will get a chance to set a new world land speed record for electric vehicles this August.

The VBB-3 is a joint project of Venturi Automobiles and The Ohio State University Center for Automotive Research.

Energy efficiency as a challenge

By designing the most powerful electric vehicle in the world, Venturi Automobiles optimizes energy efficiency, one of the century greatest challenge facing not only the automobile industry, but society at large. This approach is also what led Venturi Automobiles to the FIA Formula E championship to support a team, Venturi Formula E Team and, to be a manufacturer for season 2 (2015/2016) and onward. “In both cases we have to work on our technological innovation’s application to energy management and efficiency, both of which are the key influencers of performance and range. The Venturi VBB-3 has been ready for two years and now has the chance to demonstrate its incredible potential" (Nicolas Mauduit, CTO).

The Venturi VBB-3 is ready since 2013, but two summers in a row (2013 and 2014) heavy rains and incessant storms flooded the Salt Flats. This unprecedented double meteorological event made the track unusable and the VBB was unable to try to beat its own record.

The VBB-3 is a strategic R&D initiative for Venturi, largely in part that its electric powertrain is forced through extreme conditions with each record breaking attempt. For the Ohio State CAR “This program presents our students with a unique experience to extend their engineering education. It is the culmination of 20 years of Electric Vehicle racing at Ohio State – we do not know of any other program that has embraced e-motorsports continuously for two decades, and we are grateful to Venturi for giving us the opportunity to seek ever higher challenges in electric racing,” says Giorgio Rizzoni, Director of the C.A.R.

This program pays homage to Camille Jenatzy who, on April 29, 1899, became the first person in history to break the 100 km/h (62 mph) barrier. Just like Jenatzy, in his electric vehicle nicknamed the ”Jamais Contente” (Never Satisfied), Venturi is breaking benchmarks previously held by piston, diesel and petrol engines."