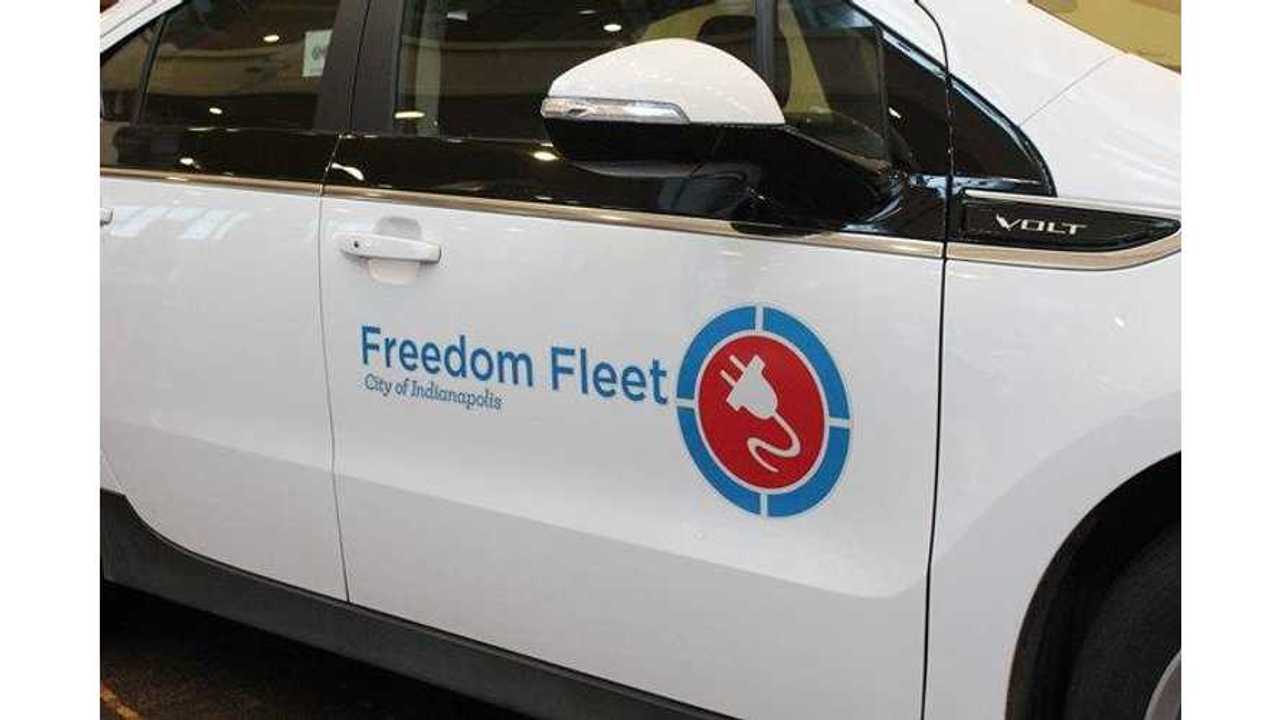 What do you do when the city gets you a plug-in car to take home? You plug it in.

Of course what you might not do is check that the 110 receptacle you are using is on a dedicated circuit. So if you didn't pay attention when they were handing out the keys to your new Volt, you might not realize that plugging in your car alongside a fridge and power tools isn't such a great idea.

That is exactly what has happened in the city of Indianapolis with its 140-odd Vision Freedom Fleet plug-in cars for city employees, as 2 receptacles have now overloaded and burned.

The fleet includes the Chevrolet Volt, Nissan LEAF as well as the Ford Fusion Energi.

We don't find it terribly unexpected really that those who are given a 'free' electric vehicle aren't up (or interested) on exactly how it works, but the decision by Indianapolis public works ordering all employees to not plug-in their EVs due to safety concerns seems a little drastic.

Perhaps just re-informing city workers a little more strongly on how to care for the city's plug-in cars would have been sufficient.

Department of Public Works spokesman Scott Manning says that city employees and police officers can't plug-in their EVs until electricians from Vision fleet inspect the homes of each employee to give them the all clear, or note that rewiring is needed.

“They’ll inspect the wiring to make sure the outlet can handle it. Obviously not everyone knows exactly how their house is wired.” Manning said, (via the IndyStar)

Separately, Police spokesperson Rick Snyder, whose officers were already disgruntled with the size of the cars for accommodating all their gear, ratchets up the hyperbole saying that officers have to now worry about the safety of the cars too.

“These vehicles are not working for police. Why weren’t we told about this possibility before? We are talking about plugging a car into someone’s home. Thank God somebody’s house didn’t burn down.”

No word on whether local Police have overcome their fear of total home annihilation and adopted the use of hair dryers and space heaters yet.

Driving Training Session For The Vision Fleet In Indy - "Hey You In The Back, Pay Attention!"

Vision Fleet had offered to perform home inspections of those city employees given plug-in cars, but the Public Works department declined citing costs, saying they would do it themselves - but never got around to it. The DPW instead opted for training session and manuals outlining instructions on how (and what) to plug your EV into.

The new home inspections should be completed by August and employees will then be reimbursed for the cost of gas over that time that would have been saved by using by electricity.

Earlier, the Mayor's vision to switch most of the city's fleet to EVs and hybrids had come under fire due to the business of politics and the no-bid $32 million contract awarded Vision Fleet for 425 plug-in vehicles over seven years.

Councilman Zach Adamson, who is chairman of the Public Works Committee (that apparently opted to not do the home inspections in the first place) and of whom was already suing to have the Vision Fleet contract nullified and a new open bid contract initiated, adds some flavor of his own.

“If Vision Fleet comes in the low bid, I have no problem with that,” but added that if the contract with the company had been open for a "deliberative process" the city might not now be facing "cars burning up".

Last month Vision Fleet CEO Michael Brylawsi commented on the program in Indianapolis and filed a petition to have the contract legally renewed amidst council's legal challenges.

"For the past two months, we've felt like the rope in a game of tug-of-war between the City and the Council. We're stuck in the middle, just trying to do the job we were hired to do," said the Vision Fleet CEO

Aren't public sector politics great? The real loser here is the image being portrayed of the safety of plug-in cars.