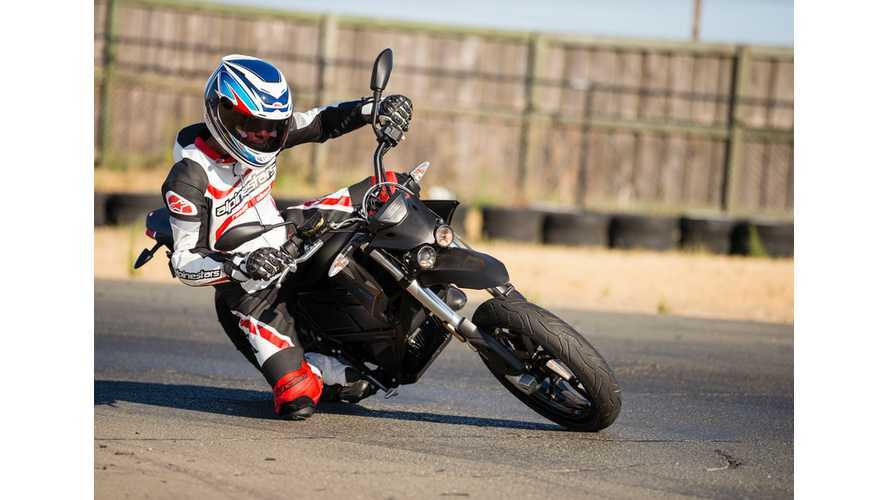 In a press release this morning, Zero announced its new model line and some slick new improvements in its drive trains.

You've got your Zero DSR - a dual-sport beast that's been injected with some power-boosting controller work: "56% more torque and 25% more power. A 660 amp controller is paired with a Z-Force® motor that contains higher temperature magnets to ensure better performance during extended durations at higher speeds."

Then, you got your Supermoto with the FXS - "...70 ft-lbs of torque, up to 44 hp and weighing less than 300 lbs, the Zero FXS is quick and agile. Suspension and brakes are ideally suited to the rigors of spirited riding, giving the rider greater control. 17” wheels and Pirelli Diablo Rosso tires provide superior grip and corner control..."  The FSX is running the interchangeable battery packs, perfect for a quick-swap out in the pits.

On to the cool stuff.  You got increased range of 197 miles - perilously close to that magic 200 mile number - as described in detail here.  That's due to the "More efficient, higher capacity battery systems..."  And, we bring you...  (well, Zero brings you...)  the ChargeTank:

For fast charging on the go, Zero offers the Charge Tank accessory. It effectively triples on-board charging speed, typically allowing riders to recharge their power pack in as little as 2-3 hours. The Charge Tank works with the rapidly expanding network of Level 2 public and home charging stations using the popular J1772 standard. The Charge Tank is a dealer-installed option available on 2015 and later Zero S, Zero SR, Zero DS and Zero DSR models.

Over on that charging page, we also noticed something that somehow we missed in the Zero charging system - these cute little, scalable "Quick Chargers" - so you can charge all Terry Hershner - style, as long as you have the circuits to pull from.

While the announcement isn't quite the earth-shattering offering of cruiser models or breakthrough range, or (as we guessed a few days ago) astronomically faster charging, (and still no parking brake?  Really?) nevermind the calls for a (shudder) cruise control that the online pundits were postulating, it's still a good, evolutionary progression of refining the products.

...and cruise control?  On a motorcycle?  Wash your mouth with soap, boy, lest you speak such heresy again.

Via Richard Harmon, this additional information has surfaced:

"A new motor has been designed called the 75-7 IPM motor, which is used on the ZF13.0, SR and DSR models. It features an "internal Permanent Magnet" design, which Zero's engineers claim will be almost impervious to thermal issues.

There has been no increased power density for the "Power Tank". Still 2.8 kWh.

Zero is offering to sell their power train components, including battery modules (as used in the FX), motors, controllers, belts and sprockets, over the counter to special customers who want to design and build new electric creations.

The Charge Tank will sell for $1988 and the Power Tank for $2674. Both have to be installed by the retail dealer (not a good idea in my opinion).

The "power pack" comes with a 5-year or 100,000 mile warranty. Everything else has an unlimited 2-year warranty.

Zero is also producing the MMX model for the military and the SP, DSP and FXP for the cops.

The 2016 bikes are currently being assembled at the factory and are expected to be shipping to dealer's showrooms before the end of the month. People who have placed deposits with their dealers for a bike will get them first."

As promised, here's a video of the FXS at play: