A Look At The U.S. Cities Where Electric Cars Make The Most Dollars And Sense 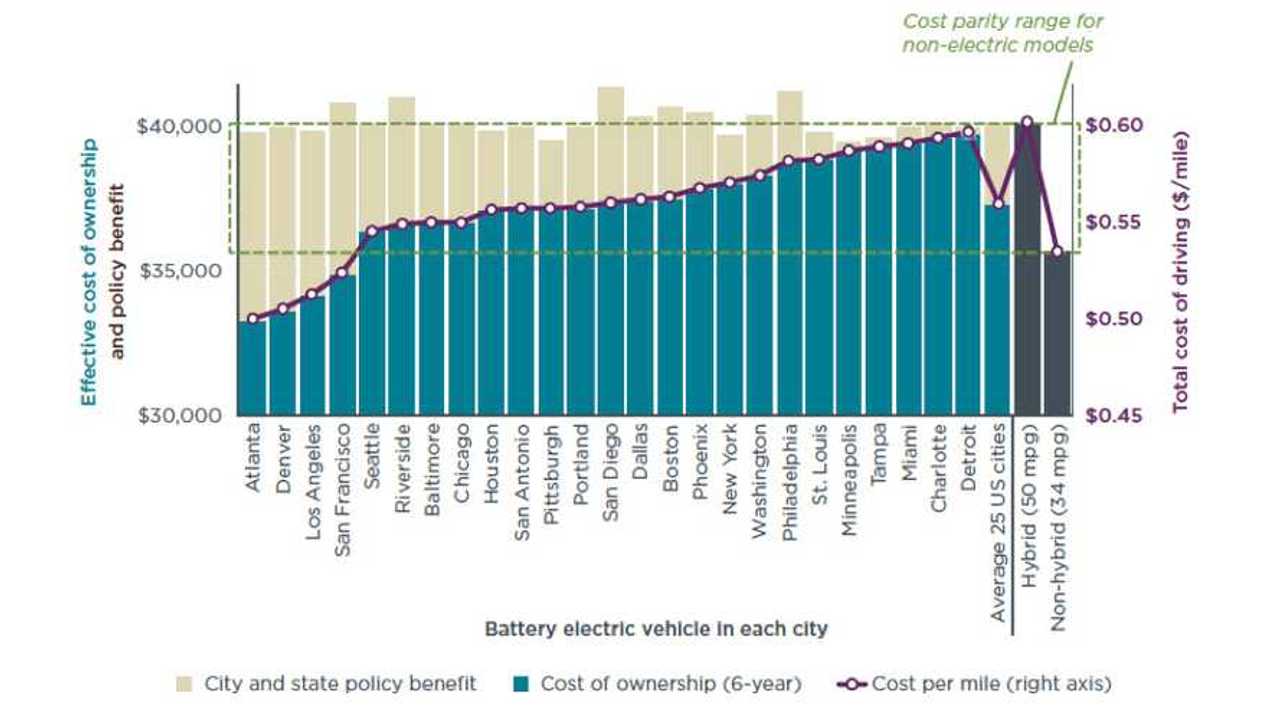 The International Council on Clean Transportation (ICCT) analyzed the household financial perspective of buying an all-electric car in the 25 largest U.S. metropolitan areas.

The graph is not up-to-date, as ICCT took policies in place at the end of 2014 to be consistent with previous reports, but it sure provides us with the general outlook.

According to the report, despite $5,000 to $15,000 higher costs compared to non-electric cars, fuel and maintenance savings supported by incentives brings effective cost of six-year ownership below ICE cars in at least several places in the U.S.

"Our recent paper on electric vehicle promotion activities in U.S. cities quantified various direct and indirect benefits of owning and operating BEVs. Since publishing that paper we’ve continued analyzing the total operating costs of BEVs. One thing we’re finding is that over a six-year period a typical BEV requires about $5,000 less in fueling costs than a non-electric counterpart (i.e., charging from the grid versus filling up on gasoline). This valuation is based on a few key assumptions: typical BEV fuel economy (miles per gallon-of-gasoline equivalent) is more than three times greater than comparable gasoline models, and average 2014 fuel prices are 11 cents per kWh of electricity and $3.48 per gallon of gasoline. We are also finding that over the same timeframe, a typical BEV requires about $1,700 less in maintenance costs, largely due to the simplicity of electric powertrains."

Besides fuel and maintenance savings, there are other direct and indirect benefits:

Some states introduced rebates several years ago, others launched them recently or ended them (like Georgia, which earlier pushed Atlanta to first place).

The best situation was in Atlanta, Denver, Los Angeles, and San Francisco, where cost of EV ownership were second to none.

"The other 21 cities have total six-year ownership costs that are higher than the comparable non-hybrid, but lower than that of the hybrid. Clearly, policy incentives play a major role in reducing the cost differential between electric and non-electric vehicles.

To date, technology development and fuel costs have helped reduce the total cost of owning and operating a BEV, which is now less than that of a comparable gasoline model in some cities. Studies suggest that BEV costs may fall further; battery and manufacturing costs, which make up a significant share of total vehicle cost, are decreasing at about 6% each year, according to the National Research Council and other recent research.

But public policy support has also been crucial to achieving that cost parity, or superiority, as the chart shows. And extension of federal, state, local, and public utility BEV promotion policies will be crucial for continued growth through 2020. That’s one reason why the recent formal launch of the International ZEV Alliance – a consortium of governments which aims to accelerate global adoption of electric and other zero emission vehicles by setting ZEV targets, sharing data and best-practice government actions, and increasing education and awareness – is such an encouraging sign."