Cadillac Boss: "We Are Not A Bunch Of Luddites" On EV Tech, But Even Tesla Isn't Making Money 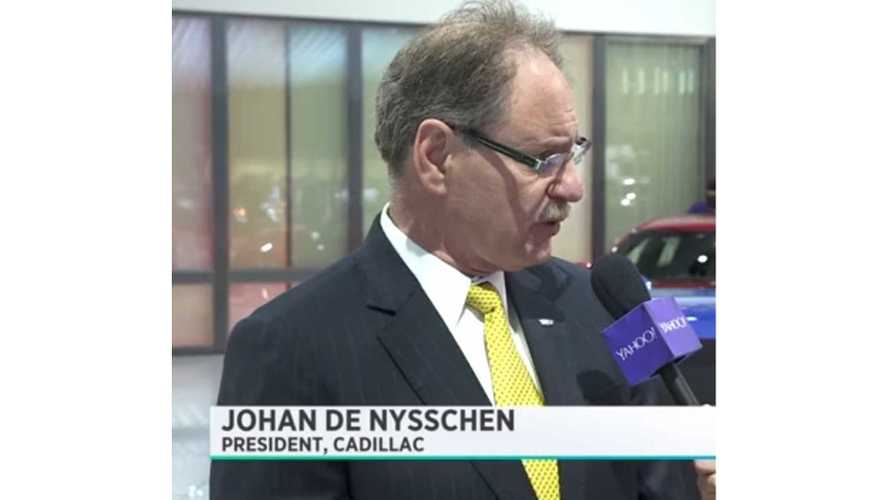 Head of Cadillac, Johan de Nysschen, shares some of his thoughts on his luxury lineup from NAIAS in Detroit, and of course has some choice musings on plug-in vehicle technology (especially given his not-so-positive history with EVs).

Cadillac Boss Tells Yahoo Finance Why He Doesn't Need To Be Concerned About Things Like All-Electric Vehicles, Regulations Or Compliance

On competing with Tesla, profitability of all electric vehicles:

"Tesla is a very interesting brand certainly.  When it comes to electrification, there certainly will be a full EV in Cadillac's lineup in the future.  It is also however a matter of prioritization.  To be candid, I don't believe there has yet been a car company that has really made a strong profit, out of any EV."

Mr. de Nysschen says that he/Cadillac "aren't a bunch of Luddites", and that pure EV technology will come eventually, but he needs to focus on today's profit margins (think traditional, gas-burning, small SUVs and crossovers).

He adds that basically Caddy has no desire to build a BEV any time soon, or to pay attention to global regulations, thanks to its standing inside GM.

"Cadillac has an advantage, we are part of General Motors, and we can draw on the resources of our parent corporation, and especially when it comes in the near term to compliance and regulatory issues, we do get bundled in with GM, and that means for us, we will focus on plug-in technology."

...not exactly being a great corporate steward.

de Nysschen also weighs in on importing vehicles from China to the US (such as with the company's lone planned import, the 37 mile, extended range CT6 PHV):

"When one makes a decision to import vehicles from China, you do so for one reason only - it's because you don't have manufacturing capacity to build the cars yet.  The regulatory environment in China means that you have a joint venture partnership; so every car you sell you share the profits.   Hence the reason it is better to build them where you have the full pie to yourself."