New Honda CEO: Electricity Will Be A Core Product For The Next Generation 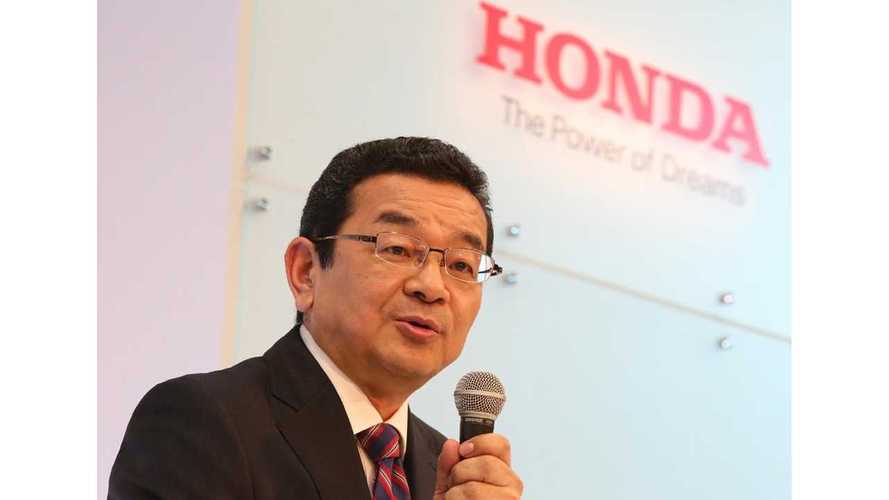 A few major auto makers fully embraced plug-in technology from the word go; names such as Nissan, General Motors, Tesla (obv), Mitsubishi and Ford.  Shortly thereafter, some others quickly responded to keep pace, lest they left behind by their competitors; names such as Daimler, BMW and Volkswagen/Porsche.

Then there were the big 3 hold-outs, who steadfastly publically refused to accept (or believe) plugs would be a major part of their future - Toyota, Honda and Fiat/Chrysler.

Now it appears Honda has come 180, and has officially embraced electricity as a "core product" in their future, as brand new company CEO & President Takahiro Hachigo, unveiled the "vision for the company" on Monday, promising a "new Honda".

One of two themes presented by Mr. Hachigo was the "continuous development of challenging products unique to Honda and delivering them to our customers around the world," but more specifically in this group "Honda will evolve products that use electricity as a core technology" in the "next-generation of mobility products."

This of course doesn't mean the end of the much-loved (in Japan at least) fuel cell vehicle projects, as Mr. Hachigo also said the company looks to bring the next-generation version of the Clarity FCV to Japan by March 31st of next year.

However, his first public speech on the importance of multiple electric vehicles underlines Honda's recent decision to both terminate the anemic Accord PHV and to replace it now with both a more serious plug-in hybrid and a fully electric vehicle by 2017.

Honda's statement on future plug-ins and a FCV:

"We are also working to advance electrified vehicles to meet the diverse needs and wants of environmentally conscious customers. We are developing an entirely new generation of vehicles starting from the introduction in 2016 of our next-generation fuel cell vehicle. This will be followed by an all-new battery electric model and the all-new plug-in hybrid model."

Can Toyota be far behind with a major plug-in announcement or two of its own?  We think not at this point.