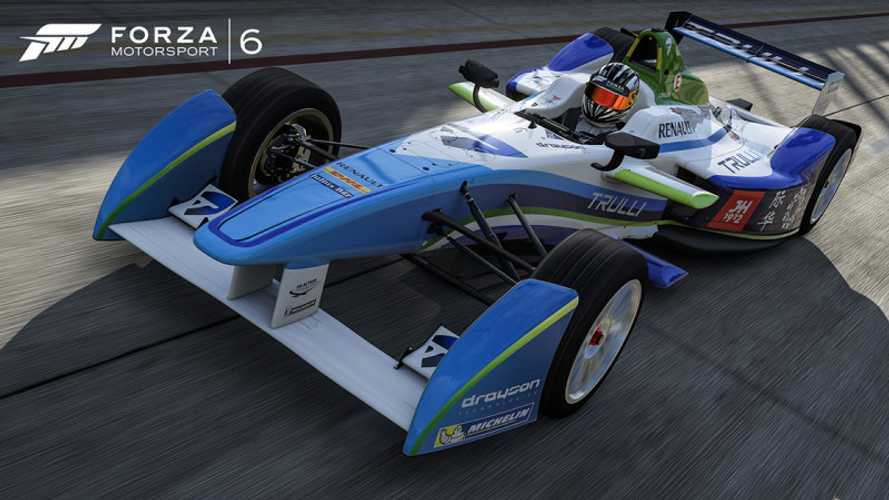 Looking for a video game that includes the entire lineup of Formula E race cars that participated in the inaugural season of the electric racing series?  Well, look no further than Forza Motorsport 6.

Here's the press blast announcing the inclusion of the entire field of Formula E cars:

The Forza Garage is now open! At E3 2015, we pulled back the curtain on "Forza Motorsport 6" for the first time, including revealing 117 of more than 450 cars that will make up the Forza 6 car list.

Starting now and leading up to the release of "Forza Motorsport 6" on Sept. 15, we'll be revealing more details each week on the full car list for the game, including additional information on the new tracks being brought to the racing world.

Formula E is a new FIA championship and the world's first fully-electric racing series. It represents a vision for the future of the motor industry, serving as a framework for research and development around the electric vehicle, accelerating general interest in these cars and promoting sustainability. The first race took place in Beijing in September 2014, the first of 11 races taking place in major cities around the world including London, Berlin and Moscow. For the inaugural season, 10 teams, each with two drivers, compete head-to-head, creating a unique and exciting racing series designed to appeal to a new generation of motorsport fans.

While still in its youth, Formula E racing requires strategic use of the limited charge of the racecar's battery. During a pit stop, the entire car is swapped rather than changing batteries. Elements such as Fan Boost, where race fans vote for which driver should get an additional power adder, make the series even more immersive for fans.

The cars are not silent – their sound is unique and very prevalent with a recordable level of no more than 80 db, not much more than the average commuter car. Acceleration is impressive with 0-60 attainable in less than three seconds. Top speeds are around 140 mph.

Now have a look at the cars and teams, as well as the primary drivers who competed this season:

2015 Formula E #11 ABT FE 01 Drivers: Lucas di Grassi and Daniel Abt. Bringing their success in DTM to the new world of Formula E racing is Abt Sportsline and Principal Hans-Jürgen Abt. Abt is one of the most successful German teams with titles in endurance and GT racing.

2015 Formula E #10 Trulli Spark SRT_01E Drivers: Jarno Trulli and Alex Fontana. Swiss co-founder and driver Jarno Trulli has competed in 256 Grand Prix in Formula One and is a business entrepreneur. One of the amazing goals for Trulli is to adopt and prove wireless charging technology.

2015 Formula E #99 NEXTEV TCR FE01 Drivers: 2015 Formula-E champion Nelson Piquet and Oliver Turvey. Team China Racing (TCR) is authorized by the Ministry of Sports in China and led by Steven Lu. TCR started in 2004 and competes in many racing disciplines from GP2 to FIA GT1.

2015 Formula E #27 Andretti Formula E Spark SRT_01E Drivers: Jean-Eric Vergne and Simona de Silvestro. The Andretti name is synonymous with racing and so who better to field one of the two American efforts in the inaugural Formula E seasons. Andretti racing boasts wins in every category of racing they have endeavored in.

2015 Formula E #23 Venturi 1 Drivers: Nick Heidfeld and Stéphane Sarrazin. The team is based out of Monte Carlo and owned by actor Leonardo DiCaprio and Gildo Pallanca Pastor, founder of EV manufacturer Venturi Automobiles. Venturi is the current holder of the land speed record for electric vehicles having reached a speed of 307 mph.

2015 Formula E #21 Mahindra M2Electro Drivers: Karun Chandhok and Bruno Senna. Mahindra is a huge multinational group employing more than 180,000 people worldwide. It is the only Indian team to race in Formula E but not a stranger to international motorsport.

2015 Formula E #9 e.dams-Renault Spark SRT_01E Drivers: Nicolas Prost and Sébastien Buemi. Co-founder Alain Prost needs no introduction as one of the winningest Formula One drivers in history. He has paired himself with Jean-Paul Driot founder of top single-seater team owner Dams. The team is based just outside Le Mans, France.

2015 Formula E #6 Dragon Racing Spark SRT_01E Drivers: Jerome D'Ambrosio and Loic Duval. When the Penske name is attached to anything in racing, you can bet it will have success. Son of Roger Penske, Jay Penske started Dragon Racing in 2007 at the Indianapolis 500 and landed an amazing fifth upon the team's debut.

Drivers: Sam Bird and Fabio Leimer. Sir Richard Branson has been known for his eccentricity and innovation through the pioneering technologies of Virgin. It's only natural to see Virgin's presence on the forefront of EV racing. Virgin represents the British effort in Formula E.