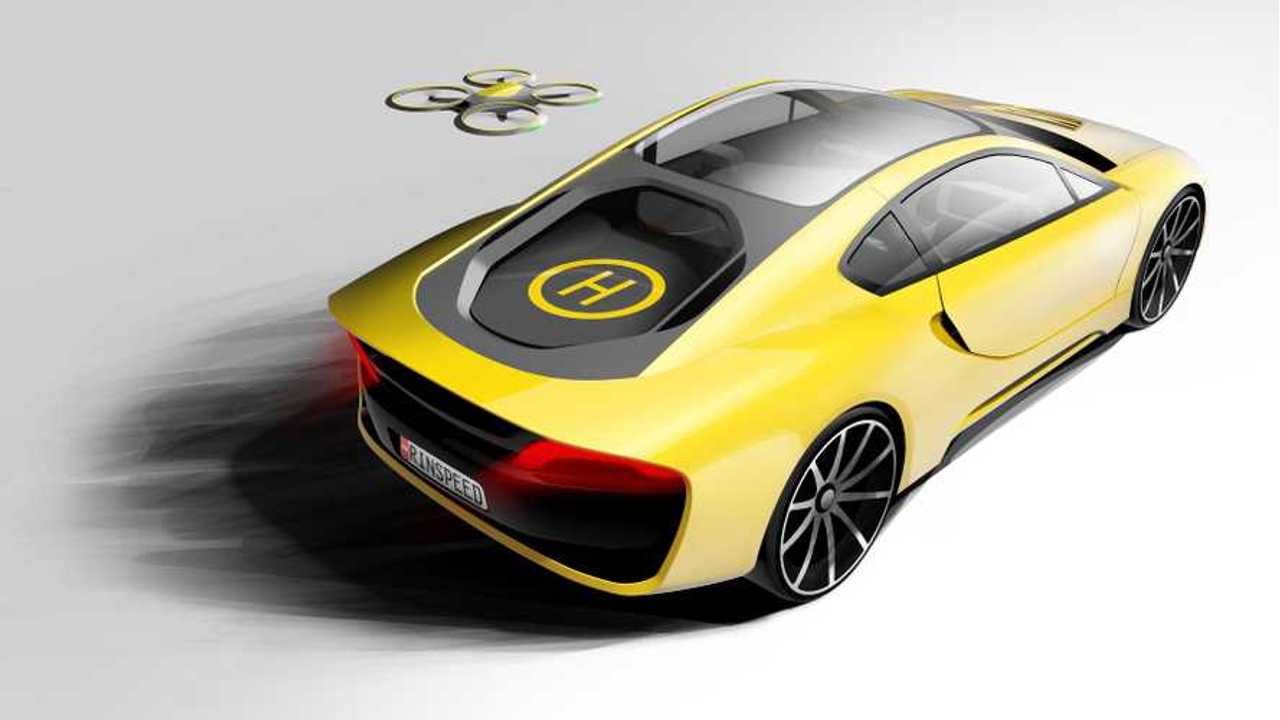 „Σtos“ is a driverless car and as Rinspeed was in recent years presenting electric cars (Tesla Model S as Rinspeed XchangE or BMW i3 as Rinspeed „Budii“).  We are almost sure that „Σtos“ has something to do with electric too. Press release indicates "the hybrid sports car" so we hope it turns out to be a plug-in hybrid.  As for the name itself, we think that might be inspired by a foreign language keyboard explosion.

„Σtos“ will be equipped with autopilot for autonomous drive.

There will also be a drone with its own landing pad on the rear end for pick-up of ordered stuff or to take a video (Tesla videographer Bjørn Nyland would like this feature).

You’ll never drive alone! Personal autopilot and drone on board.

Gambler and show paradise Las Vegas: For the first time ever, Frank M. Rinderknecht, boss of the Swiss powerhouse of ideas Rinspeed, celebrates a world premiere outside his native Alpine country and presents the hybrid sports car „Σtos“ at the CES 2016 in Las Vegas. The car visionary says: “The major and especially the disruptive innovations in future automotive engineering will come from the digital realm. That is why all major manufacturers and suppliers are now present at the CES Consumer Electronic Show.”

The Swiss progressive thinker approached the mega topic of “driverless cars” largely from the point of view of drivers and passengers, and has generated a number of equally inspiring and emotional ideas. They include an intuitive, adaptive autopilot capable of learning. The resulting and much-debated question “How much man should, must or may be in a machineΣ” will be discussed for a long time.

The interior adapts to the particular driving situation as if by magic: In autonomous mode, the steering wheel folds up elegantly and retracts completely into the dashboard. The two curved widescreens individually move closer to the occupants to provide a better view. “It really has the power of magic!”

To provide the passengers with a unique infotainment experience, the Rinspeed „Σtos“ uses the innovative Harman Connected Car technologies. Just like a personal assistant, the system operates in a thinking, courteous and anticipatory manner. In addition, it delivers perfect entertainment, connectivity and maximum safety.

As is its tradition, the Helvetian think tank studies existing digital possibilities – and demonstrates new ones. It has fitted its sporty hybrid with a drone that has its own landing pad on the rear end. The many benefits this offers are evident: For example, it could fetch a bouquet of flowers the driver ordered online and even deliver it directly to the lucky recipient. It could also take a video of the wild ride on the favorite fun road and stream it live to friends!

No doubt, Frank M. Rinderknecht presents himself as a visionary and magician in Las Vegas. And, because a great show also definitely requires extraordinary head-turning packaging, the Swiss national opted to use special innovative surface finishes in the „Σtos“ that are still completely alien to car designers. Touch it, feel it - it’s magic!

The Rinspeed „Σtos“ is already the twenty-second concept vehicle designed in-house at the Swiss “innovation lab.”"