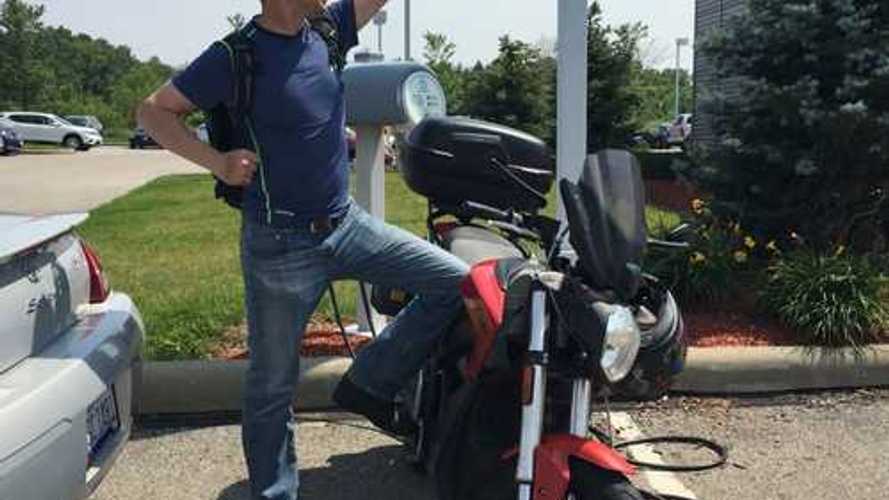 However, there are 2 Nissan dealerships that are well-spaced and I won’t need a full charge at either of them.

I arrived at the first Nissan dealership in Mansfield, OH and plugged in (as I have done about 40 times on this trip). Yesterday, one of my chargers wasn’t working properly so I was curious if 24 hours of being dry helped it out. It did! So I connected everything back to normal (I had changed some things to get it to work) and got charging.

Happy to charge at Ken Ganley Nissan for free after paying $10 for $0.40 of electricity at another Nissan dealership.

While I was checking my charging system a few people walked by and kinda glanced at me, but nobody came over to say hi. I was using electrical tape to waterproof a few connections when two people from the dealership approached me. They said the owner charges people $10 to charge there if they didn’t get their vehicle from that dealership. So I had to pay $10 for about $0.20 worth of electricity since I only needed a couple of kilowatt-hours of charge to get to my next location. The people were nice, but this fee made electricity as expensive as gasoline, and it was by far the most anyone asked me to pay.

Visiting a friend I haven't seen in 24 years.

After that the journey was smooth. I met up with a childhood friend near Akron, OH and we caught up on the last 24 years of our lives. During lunch, I left my bike charging at Ken Ganley Nissan where they were happy to help me charge up for free.

The rest of my trip was a short jaunt up to Cleveland, where I’ll salsa dance and spend the 4th of July with friends. Then my longest travel day awaits on Sunday when returning home. I’m not looking forward to spending all day on route 80 going through Pennsylvania.

my charging cord with a blade from the charger fused into it.

Just when I thought everything was going smoothly, my onboard charger breaks. I had been smelling burning rubber for about a week, but the onboard charger kept working, so I hoped it would work itself out. Now it broke. One of the pins from the charger has now fused to the female side of the cord. I’m 460 miles from home, so we’ll see how that works out.

Drying out my boots after they were soaked yesterday.