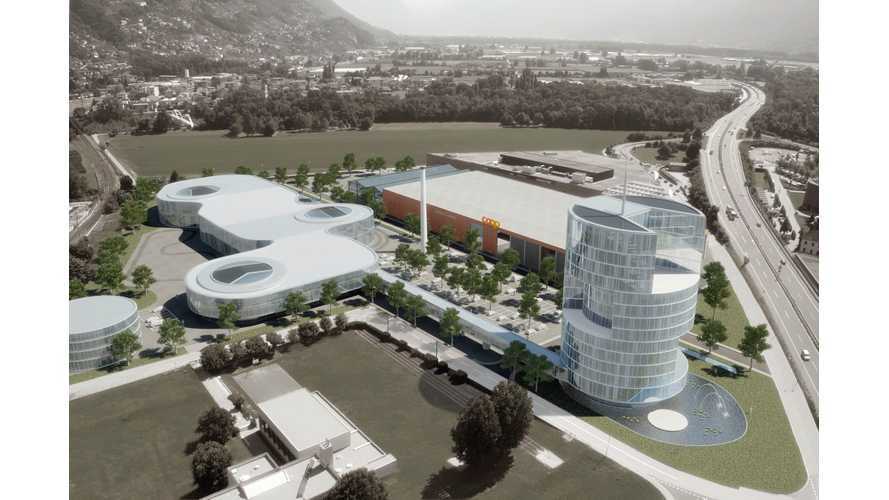 Swiss company nanoFlowcell, who for several years has promised a new kind of flow batteries and electric cars, announced a new project of a research and development center named "QUANT City".

We'd be thrilled to see this announcement come after real-world demonstration (with 3rd party verification) of the concept cars like recent Quant F (see report).

Without demonstration, we don't even have any proof that nanoFlowcell's flow batteries exist. Nor can claims about high energy densities and a range of up to 800 km (500 miles) be verified.

As more time passes, the less we believe in the claimed flow batteries performances.

But let's get back to the QUANT City, a new facility, which could be built in 2016-2018 in the Tenero in the Swiss canton of Ticino. It would serve as R&D and final assembly for the projects, but please be cautious as battery breakthroughs are all over the places these days:

"Over an area of 25,000 square metres, the activities at QUANT City will be devoted to research into and further development of flow cell technology and the testing of new applications for the nanoFlowcell®, in which - to put it in very simple terms - two ionic fluids generate electricity by means of a chemical process. Subject to the contract being signed for the purchase of the site, completion is planned for 2018. Between 150 and 200 new jobs are expected to be created at the site in Ticino for engineers, researchers and lawyers, jobs that will indirectly create or safeguard around a further 2,500 jobs with suppliers and service providers in the area around Ticino.

With this state-of-the-art research, development and production facility, nanoFlowcell AG intends to push further ahead with the many possible uses for the nanoFlowcell® in industry and by consumers. From further developments in the automotive sector through to use as an energy system for buildings and applications in shipping, aerospace and rail traffic, the researchers and developers at QUANT City will fathom out cost-effective and ecologically worthwhile applications and transfer these into practical use.

Nunzio La Vecchia, Chief Technical Officer at nanoFlowcell AG, is motivated and also optimistic for the future: "With the nanoFlowcell®, we have the potential to create the most innovative, sustainable and enduring energy technologies in the world. It is a technology that has many applications and that we at QUANT City will continue to develop and intend to make market-ready. In order to focus on maintaining our current research edge, QUANT City will give us an infrastructure with the technical and scientific requirements necessary for our success."

The completion of the QUANT City research and development centre, which is in line with both land use and regional development plans, is planned for the middle of 2018. The municipal administration of Tenero-Contra is also interested in the construction project.  The operator will be the newly founded company nanoResearch SA, a wholly-owned subsidiary of nanoFlowcell AG.

nanoResearch SA will be responsible for research and development. Aside from the intensive further development of the nanoFlowcell®, the tasks of the company, which was founded in November 2014, will also include the marketing of the patent and licence rights to the nanoFlowcell technology. For this reason, international patent agents and lawyers will also work at QUANT City.

Virtual reality will be at the core of the research work carried out at QUANT City. In order to pursue a combination of research and development at this location, nanoFlowcell AG will relocate its existing "nanoFlowcell DigiLab" from Zürich to Tenero. A vital role in the principle of virtual reality is played by the graphic representation of reality and its physical and chemical characteristics in an interactive, virtual environment. This will involve the graphic implementation, representation and assessment in real time of computer-supported results from the research and development activities. State-of-the-art 3D animations and simulation software will be used for this.

With the help of virtual reality, it should also be possible to push ahead with the scaling of the nanoFlowcell® hardware for different applications. "As the nanoFlowcell® contains no moving parts, there are in theory no limits to the scaling of this energy system. We can be small, but we can also be big. And that's what will be simulated, investigated and tested in our research with virtual reality," says CTO Nunzio La Vecchia.

A modular design of the QUANT will be produced here, which means that finished components such as the chassis, axle systems, on-board systems and engine and gear components will be delivered pre-manufactured to QUANT City and will undergo final assembly here.

"We have opted for small series production in Tenero so that we can also proceed effectively alongside it with the further development of the nanoFlowcell® in the automotive field. This type of production can only be of benefit to the environment," says Nunzio La Vecchia.

As a centre for the further development of flow cell technology, nanoFlowcell AG in QUANT City will in future also be responsible for scientific tasks. In addition to fundamental research, the research and teaching around flow cells will also be a fixed part of QUANT City through collaborations with universities, institutes and other scientific establishments. To this end, the "QUANT Academy" will be founded, which will combine all areas of research and development within the nanoFlowcell AG company group. Scientific work such as degree dissertations and doctoral theses on flow cell technology and also on ionic fluids as energy sources of the future can and will in future be carried out at QUANT City within the QUANT Academy. To this end, nanoResearch SA will offer not just the premises but also the technical and scientific requirements. Prospective scientists, engineers and doctoral candidates will thus be given the opportunity to learn from and carry out research with leading figures from the fields of research and teaching as well as gaining practical experience in industry.

The municipal council of Tenero on the planned QUANT City construction project in Ticino:

"We have been following the development of QUANT City with great interest since 2010, and thus from the very start. In addition, in June we looked into the plans to set up a production and research facility in Tenero for Quant vehicles. In keeping with the approved planning, the municipal council in Tenero supports unreservedly this development on the site of the former paper factory, especially as the QUANT City project is also in keeping with regional interests for the future development of Tenero.""