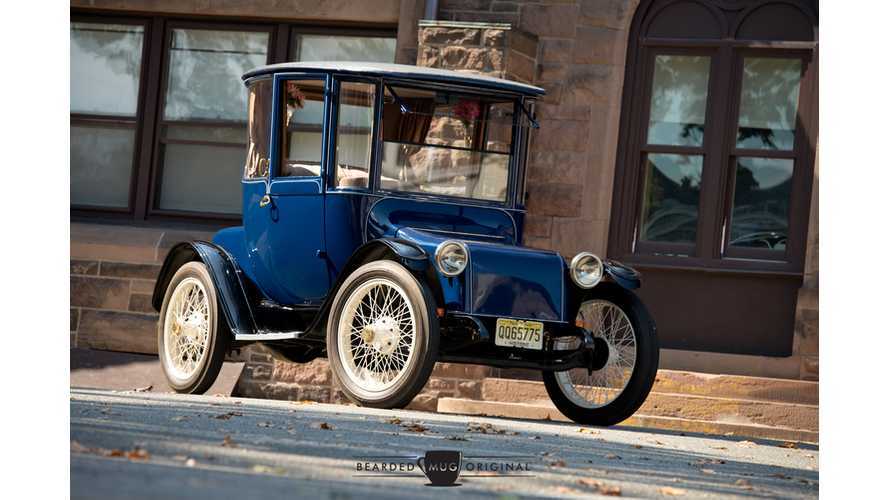 Fear not, dear weather-loving friends and those without proper surge protection. The type of electrical swell I am referring to is the vehicular kind. You know, the ones you don't hear coming. Or leave a carbon footprint. Or even emit the slightest bit of smugness that the second-gen Prius was so prone to doing (Toyota is still hesitant to offer a recall for this issue). I'm talking about EVs, more specifically the folks from the Electric Auto Association and their participation in National Drive Electric Week!

This year I was commissioned to cover two of the events, which were as different in presentation as they were similar in their goals. The first was the Madison Farmer's Market, set up in street fair fashion in Madison, NJ. Local farmers brought their goods, including fresh produce, jarred sauces and appealing fruits. Girl Scouts were on hand to do crafts with the kids. And a gentleman with an acoustic guitar was entertaining the populace who lent him their ears. And there, parked diagonal along the sidewalk, across from a farmer's stand and adjacent to the Madison Chamber of Commerce tent, were the EVs, blending harmoniously with their green environment.

The power to plug it in amazes people of all ages. Image Credit: Bearded Mug Media

*Editor's Note: We'd like to extend our thanks to Bryan of Bearded Mug Media for sharing this article with our readers here at InsideEVs. Bryan McCarthy, a professional photographer by trade, regularly attends car shows to snap some of the sharpest images of cars we've ever seen. Please do check out Bryan's work, including tons of photos of other electric cars not seen here, by clicking this link to his Bearded Mug Media website. Additionally, you'll find more electric cars over at Bearded Mug in these two galleries:

Lastly, we'd like to allow Bryan a few words to sort of introduce himself to our readers.  Here's what Bryan says:

"The EV bug has bitten me. I'm not sprinting to replace my GTI with an e-Golf anytime soon, but I've learned to appreciate the electric car, from the Leaf to the Model S and everything in between, EVen that peculiar Mitsubishi i-MiEV. "

"I enjoy photography immensely, especially when the subject is cars. And if I can throw some words together afterwards to describe my experience beyond the photographs, then I'm twice as happy!"

Also on hand were dealer demos providing test drives to those looking to see (clearly not hear) what all the fuss was about. I don't have a running tally, but I'm almost certain that all who came away from behind the wheel of either a BMW i3 or a Nissan Leaf were properly impressed.

And beyond the cars there were the EV enthusiasts themselves; the ones volunteering their time to interact with the common folk, effortlessly explaining flux capacitors and regenerative braking in layman's terms as though they developed the technology themselves. The people that are so on board with the technology, they're willing to substitute the joyful noise of pistons firing at wide-open throttle for the Earth-conscious hum of an electric motor. And I mean that in the sincerest way. These folks should be recognized and portrayed in a positive light. Please don't confuse this eco-friendliness as anti-enthusiast. From what I could tell, most of them are not the same people that bought the first and second generation Prius because they felt compelled to "do their part", in the most self-aggrandizing way. This EV group, as I have come to see it, share a lot of the same qualities that any "car guy" possesses.

This is further solidified by the growing EV contingent that shows up at the weekly C&Cs hosted throughout the area, as well as the large turnout for the EV specific events, such as the two being described in this post. But let me get back on topic before paragraph anxiety kicks in.

Moving on to Morristown! The generosity of the Presbyterian Church of Morristown allowed over 40 EVs to congregate in their parking lot on a beautiful Saturday morning. The prime location on South Street ensured that a steady stream of curious streetwalkers diverted their paths from the sidewalk through the parked participants. Sustainable Morristown sponsored the event, which was organized by Chris Neff, a member of the National Board of Directors for EAA. To say it was a success would be an understatement. I arrived around 9:30 a.m., and it was constant traffic throughout the day. The mayor of Morristown, Timothy Dougherty, even dropped by to chat with members after enjoying his morning coffee across the way.

Smart World Coffee, situated right across the street, provided pastries and java to the attendees. Peter Franzoni, a sales associate from Paul Miller Volkswagen, brought along an e-Golf for test drives, raising the grand total of the German make's electric offering to 4, including two privately owned cars and the one drove there from Trend Motors Volkswagen. It's great to see such dealer support for events like this. There may not be immediate benefits, as in they're most likely not going to be selling cars on the spot, but just being present and allowing potental customers the ability to touch and feel the product is important for planting the seed.

There were an assortment of EVs, from the Tesla Model S and Roadster, to a handful of Volts and Leafs (Leaves?), BMW i3s, a RAV4 electric, a Ford C-Max Energi, Mitsubishi i-MiEV, a Mercedes-Benz B-Class Electric Drive and a Smart ForTwo Electric Drive. There was even a electric motorcycle present, with its owner Ben retelling the tales of how he took it on a 7,000 mile journey around the country. It's safe to say he's conquered his range anxiety. And coincidentally enough, a cyclist was riding past on his electric bicycle and decided to pop in to see what was going on! That was the atmosphere there...friendly, welcoming people looking to bring attention to the electric mobility movement.

The historical gem of the gathering was a pristinely restored 1917 Detroit Electric Model 68 owned by Don Davidson and Sarah Stanley, great-granddaughter of Francis Edgar Stanley, co-founder of the Stanley Motor Company. It took nearly 30 minutes to drive it there, but they did, on public roads, never exceeding the posted speed limit, nor coming close to it. They then finished the afternoon by giving joyrides around the parking lot, to both a local reporter and Chris Neff and his family. As a fair trade off, the owners of the two Tesla Roadsters strapped Don and Sarah in and took them for a lap around Morristown. That was quite the literal change of pace for them, and it was very apparent in their smiles. Don and Sarah also have other turn of the century classics in their collection, including appropriately enough, a Stanley 'Steamer'.

Seeing 100-year-old technology to power a car without a gasoline engine was awesome in every sense of the word, but at the same time a bit of a head-scratcher. Why haven't we gone further in the last hundred years with it? I can attribute it to the popularity and ease of fueling, rather than charging, up that lead to the electric car being shelved for so long. And the oil companies of course. I can't imagine harder working lobbyists than those trying to pull the plug on electric cars, fighting to maintain the dependent status quo with plateaued MPG numbers and underwhelming emissions regulations. Anyway, I hope the right people in the industry will consider bucking convention to make progress at a faster pace.

And therein lies one of the goals of events like this: awareness. How many people do you know either own an electric car or may have driven one at one point or another? I can tell you that before the e-Golf was released, I had zero experience with them beyond go-karts and Power Wheels. Driving to both events was a strange sensation, as I hadn't taken a "longer" drive before. Granted, both destinations were within 15 miles or so, but it initially felt like I was driving to Florida on a half-tank of fuel, constantly looking down at the range and calculating how hard it would be to push the car to the nearest outlet to charge myself up for a ride home. The range for the e-Golf is between 85-100 miles on a full charge, meaning I could have driven to both shows with the AC on full blast and still have juice to spare. Getting over the range anxiety takes time I'm told, but I could see the allure in being independent of fuel fill-ups.

I'm not going to lecture you on the importance of finding alternative fuel sources because those fossil fuels aren't going to last forever. I'm not going to try and sway you to 'Go electric!' because it's the right thing to do! Or because it's our responsibility to our children, and our children's children to preserve our planet. And I'm certainly not going to advocate for driverless cars! I'm an auto enthusiast and the last thing I want to do is petition or picket to remove myself from the driver's seat whilst dredging the engine from the bay. I bet if my heart were to stop tomorrow, the sound of six Webers sitting atop a Colombo V12 would bring it right back to life.

But that doesn't put me in the 'against it' column. I want to see this technology succeed as much as the Eco-Advocate happily piloting his Smart ForTwo Electric Drive, whose house is also powered by solar panels, and who would much rather be off the grid than pole position on one. Most, if not all, major manufacturers are onboard for the further development of electric propulsion. With a little bit of knowledge and public action, sustainability can be attainable. And all of that starts with meets like these informing an otherwise unknowing public of the benefits of this alternative energy. Because like it or not, one day that Colombo V12 that would bring me back to life is not going to have to fuel to keep itself alive.

*Additional Note: As mentioned above, Bryan of Bearded Mug Media has an extensive collections of amazing photos of automobiles. Please do check them out by clicking here. His work is stunning!