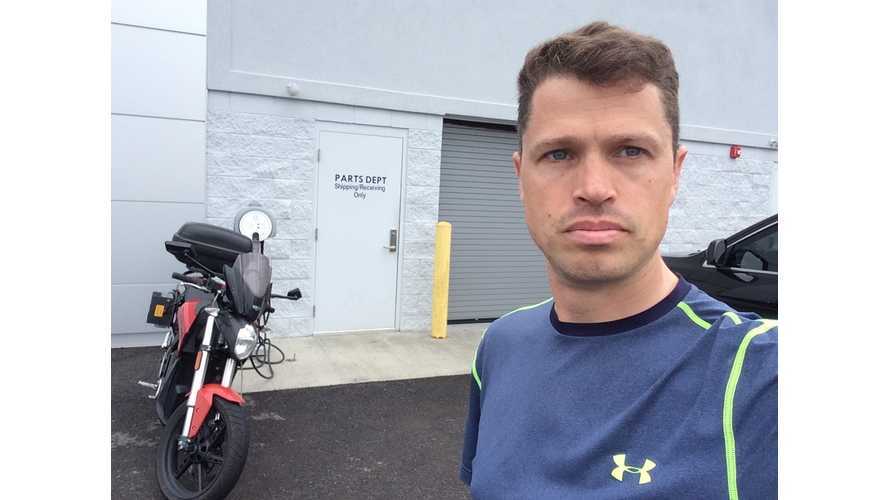 Today there was trouble in paradise. For the vast majority of this journey, the riding has been smooth, the charging has been fast, and the weather has been sunny. Today only one of those three things happened.

It started out like many other days, getting on my Zero SR at 7:30am to begin the day's journey. My friend, Michael Beatty, who rides a 2012 Zero S joined me for the first few miles as I left town. Then the first charging stop I was greeted by inquisitive Ford salesmen at Greenwood Ford in Bowling Green, KY. They were happy to let me charge even though they had signs stating "For Ford Cars Only". This was the first time I saw this type of protectionism on this trip. It is far less frequent now, but still exists. Most dealers ascribe to the idea that "A rising tide lifts all boats", and they allow all makes to charge.

Carl Swope who let me use his car just minutes after meeting me and talking about electric motorcycles and the Nissan LEAF.

I rode through constant rain and a short heavy shower on the way to Swope Nissan in Elizabethtown, KY (just south of Louisville), and that's when my day got long. One of my chargers didn't recognize the battery was connected and wouldn't charge. Also, my onboard charger didn't work until I dried out the socket. So I was charging at 4kW instead of 6kW. This increased my stay by 1 hour. I tried a few things to get it working again, but was unsuccessful.

Also, my phone stopped working for about 30 minutes. I rely on my phone to find charging stations, to communicate, and several other things. This was also very scary.

Swope Nissan was a great place to be stuck, because they were incredibly nice, friendly, and even helped me get some supplies to work on the bike. No only that, but Carl Swope (the owner) gave me the keys to his LEAF so I could go get lunch while my bike was charging. That was unprecedented generosity and I will always remember him for it.

Riding in the rain between Nashville, TN and Louisville, KY.

Again, I lost about 2 hours at that charge before making the rainy trek to Tri-County Ford between Lexington, KY and Cincinnati, OH. It was there that I finally got all 3 chargers going again with the help of Harlan Flagg at Hollywood Electrics. He sells these chargers and is my go to guy when something happens. He has an uncanny ability to troubleshoot from 2,000 miles away.

Celebration after getting my 3rd charger to work again!

After speaking with Harlan, I got the third charger working again but still lost about an hour of time. It was about 6pm and I had anticipated being significantly farther along at that point.

The bridge across the Ohio river to Cincinnati.

Made it to Cincinnati and charged in a downtown area where I could get dinner, but the charger started acting up again. After fiddling with it, I just went to eat dinner at Mr. Sushi in downtown Cincy. The food was good, and the waitress may have helped save me a ton of time. Courtney gave me a paperclip that I would eventually use to MacGuyver my way to getting the charger to work again! Thank you Courtney!

I managed to get the charger going once again and left there around 10:30pm. At this point I still didn't know exactly why it was or wasn't working and I didn't know what exactly fixed it, but I started to have an idea.

Swans at the Tanger Outlet at midnight.

The final stop was at the (very much closed) Tanger Outlets in Jeffersonville, OH just south of Columbus. I finally figured out how to get the charger working consistently! By this time I was back in the Eastern time zone and I charged there at the full rate until 1am.

At 2am I finally arrived at my destination and was greeted by my friend and his 6 month old baby who happened to have woken up just before I arrived. Plugged in the bike, chatted for a few minutes, then hit the sack.