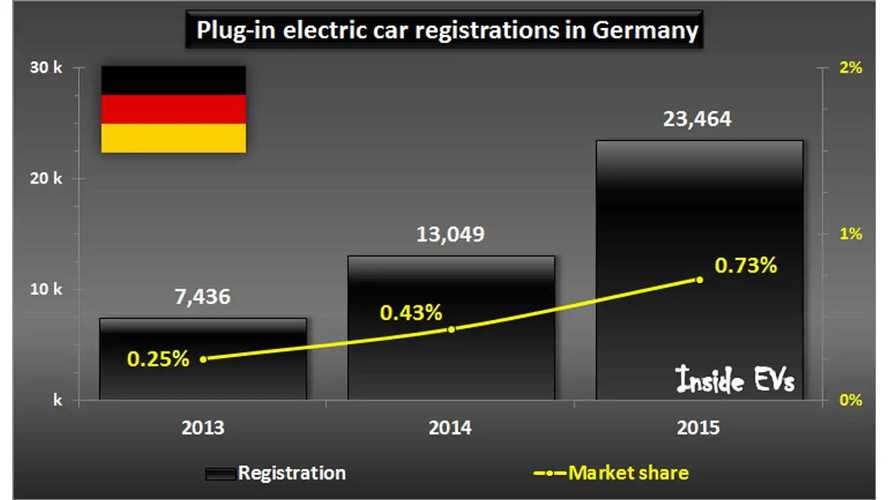 1,582 Tesla Model S were registered in Germany in 2015 including record 234 in December

Germany ended the year 2015 - like many other countries - with a new record for plug-in electric car sales.

Registrations in December hit an all-time high of 3,176, which represents a record 1.28% market share. 1,920 of those registrations were assigned to all-electric models (a new record too), and 1,256 PHEVs.

As you can see above, Germany is increasing plug-in electric car sales every year and in 2015 the country registered 23,464 new plug-ins, which on average translated to 0.73% market share. Growth year-over-year stands at nearly 80%.

At the current pace of growth, next year maybe we will see 40,000 sales and between 1 and 2 percent of market share.

Surprisingly, pure electric cars managed to have more registrations than plug-in hybrids (including BMW i3 REx) - 12,363 vs. 11,101. But later we will found out why.

The model behind the huge all-electric car registrations increase in Germany is the Kia Soul EV with its phantom sales.

Kia Soul EV noted the most registrations among all plug-in models in Germany - 3,839, but we believe most of those cars pretty quickly disappeared and were exported to countries like Norway. Kia was able to decrease its CO2 emission to 131.1 g/km this way.

Let's check  thenumber of registrations for the best selling all-electric models for the year 2015:

On the plug-in hybrid side, top models exceeded 2,000 sales. Mitsubishi Outlander PHEV stood at 2,127 and the Volkswagen Golf GTE was at a similar 2,000+ level.