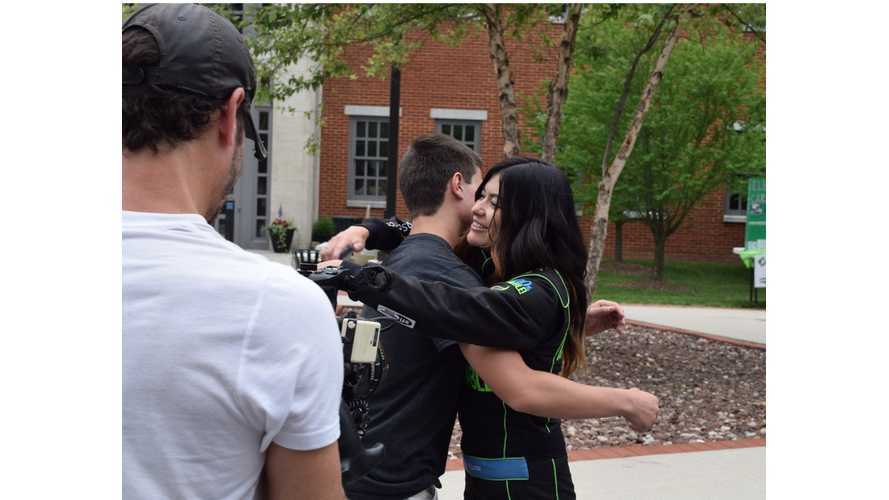 Maxwell thinking he is being interviewed by the press

Hopefully by now you have heard of the story about Leilani Munter surprising a 16 yr old EV advocate (soon to be Eagle Scout) by showing up to an interview and whisking him off for a ride in not one but two Tesla. Model S 85 and then a P85D. But what that video does not tell you is the whole story of how this day even happened and what does it all mean and why.

So let me explain since I was there from day one. and behind the scenes It all started about a month ago when my EV organization - the Electric Auto Association (EAA) which I am a member of the board - received a note from The Solutions Project or give them a call about a cool new project. They were looking for a compelling EV story that would really get people to plug-in...so to speak. Something where Leilani would show up and thank a well deserved EV advocate. The proposed event would be filmed and posted to www.100.org or the 100% Campaign Project where they highlight people doing extraordinary things for a cleaner planet and affordable clean energy. I was asked if I knew of anyone among the EV community that might fit this profile.

*Editor's Note: This post appears on Chris' blog.  Check it out, along with additional photos from this story, by clicking here.

As luck would have it I had just been introduced to a Maxwell Halkenhauser, a 16 year old that had lead an Eagle Scout project to get a public charger installed in his town of Denville NJ. In short, Maxwell pushed forward and got his town a grant for $10,000 from Sustainable New Jersey to cover the installation costs and along the way received guidance from Tom Moloughney who put him in touch with the right people at ChargePoint for the station. A truly amazing person, Maxwell had succeeded where many of us had not and this was just the beginning for him.

I got back to my contacts at The Solutions Project on my recommendation, we had a call with Leilani and we were on the way. Now the tough part, how do we arrange a surprise visit with Maxwell by Leilani, knowing that the camera crew would have to be near to capture the moment of surprise....so the plan was that the camera crew would be the press and they would set up a virtual interview with Maxwell, the Scouts that helped him on this project would also be present....oh and we would do this at Denville Town Hall....oh and we had to do this in a few days....easy.

I got a hold of Maxwell's parents who were awesome in setting up the surprise, they got a hold of Town Hall and the Scout leader, all of the officials were extremely supportive. Things were looking good, just one snag, we needed a Tesla and not just any Tesla, a P85D. Leilani was flying up so she would not have her car. To add more stress we find out Tesla was short on Model Ss, especially the P85D due to an earlier planned event they had set up. It was the day before and the production company called to say they Tesla had confirmed an 85 - bummer no P85D - but we happily accept whatever they can provide fro us. We knew Maxwell would be amazed with that, but Leilani driving Maxwell around in a P85D would be even better - what to do.

Now here is where the EAA and it's Ev community stepped in...I sent out a few emails to Model S owners I knew and the search was on for a P85D. Two confirmed that they were available and had 85s, Andrea and Ken. They were going to bring them in case we needed them but still no P85D though there was a lead on one that were tracking down.

Day of the shoot and 2 hrs before it all goes down....a text comes in from Roger - he has a P85D and was just getting supercharged in Edison then would be on his way....YES!!!! He would not make the initial surprise scene but Leilani would get the chance to take Maxwell out in the P85D later in the shoot, we were thrilled. Two surprises today, one for Maxwell and one for Leilani....this was going to be a great day.

I arrived and saw the Model S parked up along the sidewalk which Tesla provided for the day, inside that Models S was Leilani. I had never met her before but was super excited to. The crew was scurrying about getting set up - we only had an hour before Maxwell shows up.

Did Leilani just call me an EV hero?

After quick introductions were made I got to get into the Model S with Leilani to take a dry run around town and plan the route. I won't go into a lot of detail but Leilani is the real deal. She really puts you at ease, very easy to speak to, very much an EV advocate and environmentalist and simply put, good people. I was really impressed and could not wait for Maxwell to meet her too.

As we continued our dry run and headed down the street and came around a turn Leilani blurts out...oh look there is a LEAF...I said Leilani DRIVE DRIVE!! It's them! We thought we were toast....of all the dumb luck...I texted Maxwell's Mom to see if he recognized us and luckily he did not, he just told her he saw a cool black Model S....whew!! We are back on.

I'll stop here for now - there is more to this story that I'll share after the high production video comes soon which will initially be posted to www.100.org. You will definitely want to see it. They recorded Maxwell and Leilani inside both the 85 and P85D as well as those EVs hitting stellar speeds. It was awesome to witness Maxwell's EV grin grow as he went from 85 to P85D - he did look a little pale after the P85D ride. ;) You will also see areas of the town, one on one interviews and where the chargers will be installed.

Waiting on a side street - Leilani's surprise - P85D

I'm really proud of this day, proud that we made Maxwell's day, probably decade. Proud that we all came together as EV advocates to support the EV cause and those that support us. Finally, I'm proud that this effort is for the greater good and proves that we all really can make a difference - taking some text from 100.org - Together, sparking new conversation about what is possible and igniting the human spirit to achieve it. - couldn't agree more.

And they are back

PS -  After this day the Rotary Club of Denville has said if the project runs out of funds during installation they will cover it. And Maxwell joined us at a Cars and Croissants and got to drive a Tesla Roadster as well as received numerous congratulations from fellow EVers and car fans alike. One last thing, I was later contacted by another P85D owner right in Denville who is happy to bring his car to future EVents...now we know ;)