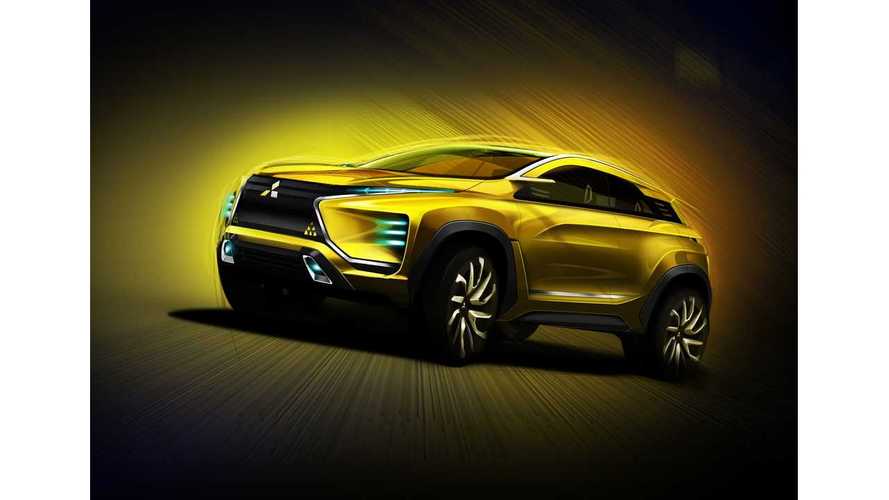 Mitsubishi improved our mood today by announcing it will debut its all-electric 5-seat compact SUV at the 2015 Tokyo Motor Show.

It's called the eX Concept and, due to its concept status, we are not sure whether market introduction is being considered, or this vehicle will foreshadow/give design clues to another.

The Japanese company also intends to present a panel display telling the story of 50 years of MMC's research and development in the field of electric vehicles, so we hope the eX Concept marks the start of another 50 years.

Mitsubishi eX Concept not only looks sweet, but boasts an impressive 400 km (nearly 250 miles) of range.  We should note that the stated 400 km range is via the ludicrous JC08 test cycle - this would translate to about ~245 km/150 miles of real-world/EPA range.

The 45 kWh Mitsubishi next-generation battery system is a huge step forward from the i-MiEV (16 kWh) and Outlander PHEV (12 kWh) and should provide at least 200 km (125 miles) of real-world range.

It's a twin motor AWD vehicle, derived from Outlander PHEV, too. Two 70 kW motors (140 kW total) should provide a decent kick.  Go ahead Mitsu, you have our permission to build!

Both exterior and interior indicate the direction MMC Design is taking. Overall, it evokes the image of a sporty crossover zipping nimbly around town as it merges the elegance and stylishness of a “shooting brake” (a term for a coupé with flowing styling fused with a hatchback car, the term originates from British hunting-use horse carriages) with compact SUV lines. The front end is a new interpretation of the Dynamic Shield front design concept."

The MITSUBISHI eX Concept is a vision for a compact SUV powered by a next- generation EV system. In terms of design, overall it evokes the image of a sports crossover zipping nimbly around town as it merges the elegance and stylishness of a “shooting brake” (a term for a coupé with flowing styling fused with a hatchback car, the term originates from British hunting-use horse carriages) with compact SUV lines. The front end expresses a new interpretation of MMC’s Dynamic Shield front design concept. In both its exterior and interior, the MITSUBISHI eX Concept indicates the direction MMC Design is taking.

The next-generation EV system employs a high-capacity and high-performance battery together with compact high-output electric motors making it lighter and more efficient. With further weight reductions in the vehicle itself, it can provide a cruising range of 400 km.

Installing the drive battery beneath the body has lowered the center of gravity and together with its Twin Motor 4WD and S-AWC integrated vehicle dynamics control systems helps it provide handling control which faithfully reflects driver inputs as well as outstanding vehicle stability. The MITSUBISHI eX Concept is a next-generation SUV a step ahead of EVs to date.

Other features include the application of automated driving technology which combines connected car technology, utilizing next-generation information systems, and advanced active safety technology. When it detects danger it quickly and precisely utilizes its safety features and is also equipped with functions which detect malfunctions or abnormalities early and advises the driver to take the vehicle in for repair or servicing.

The MITSUBISHI eX Concept’s active, pulsating design uses a very dense, solid form that gives it a strong presence, looking as if it has been carved from a single block, as well as marrying the elegance and stylishness of a “shooting brake” car with the lines of a compact SUV. While luggage compartment provides ample space for outdoor pursuit gear, the MITSUBISHI eX Concept establishes styling which evokes an image of a sports crossover zipping nimbly around town.

The front is a new interpretation of the MMC Dynamic Shield design concept. For the MITSUBISHI eX Concept, the design takes a slightly more functional direction. In addition to the visual expression of the "shield" shape to protect people and the car alike, its daytime running lamps and the turning signal in the top make them more visible to pedestrians while the headlights are located under the ends of the bumper to prevent blinding oncoming vehicles and pedestrians. Another element that serves to enhance a feeling of reassurance is the use of rubber coating on the underside and the sides of the fascia where contact is possible with people or obstacles.

The easy-access doors without center pillars lead occupants into a pleasing interior space. To also express what defines a “shooting brake” car inside the MITSUBISHI eX Concept, the driver and passenger seats use different colors to give each side a different ambience, making for an interior space which is both sporty but also bright refined and spacious overall.

The use of a framed structure covered with soft-touch material for the dashboard and other major elements of the front compartment not only creates a sense of being light in weight visually – the car’s structure actually reduces its weight.

The center console houses two portable batteries which can be used outside of the car to support the active lifestyles.

The MITSUBISHI eX Concept also employs an augmented reality*1(AR) windshield in the front windshield as well as the Intelligent Display giving various driving information which is located in the center of instrument housing. Linking to an information network using connected car technology, the MITSUBISHI eX Concept brings new ways of enjoying the in-car experience as well as offering other possibilities.

*1: A live direct or indirect view of a physical, real-world environment whose elements are augmented (or supplemented) by computer-generated graphics or sounds.

Employing augmented reality technology, information acquired through linking with connected car technology is displayed on the AR windshield. Displaying such information within their forward field of view allows drivers to view changes in road conditions without having to make major movements of their line of sight. The kind of information that can be displayed includes: Route guidance from the car navigation system; Vehicle-to-vehicle distance alerts; Lane departure warnings; and information on fixed or movable traffic signs acquired by the camera-based road sign recognition system.

In addition, the AR windshield is fitted with the Caution Tracking which employs driver assistance technology using vehicle-to-vehicle, vehicle-to-road and vehicle-to-pedestrian communications to display guidance and warnings on information outside the driver’s field of view, such as vehicles or pedestrians approaching intersections but hidden from the driver. Urging the driver to make split-second decisions and vehicle operations, the AR windshield supports safer driving.

Located in the upper part of the instrument housing, the Intelligent Display provides a portal to a whole range of driving information. Linked to the navigation app on a smartphone, it can display route guidance. Search information through a smartphone or PC is shared with AI via the Cloud and the car will display the driver’s requested internet search information via the Cloud. The AI function of the Intelligent Display will make recommendations based on understanding of the driver’s interests and hobbies.

Side View Monitors are located on either side of the main instrument housing. Replacing traditional door mirrors, they use high-definition cameras fitted to the car body to display the rearward field of view and so reduce the amount of eye movement the driver has to make.