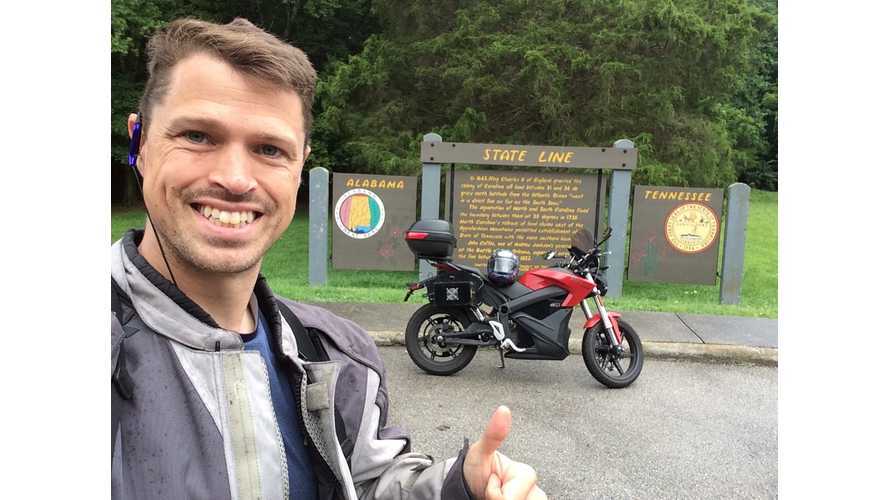 If you don't "judge a book by its cover", you'll meet the most interesting people. The ride today was much more enjoyable than yesterday on the Natchez Trace Parkway. The distance was shorter, so there were only 2 stops and both of them went smoothly. But one stop produced an unexpected surprise!

I woke up at another AirBnB and the host had taken me out to dinner the evening before. This allowed my bike to charge and we had a great time eating great food. These last two experiences have really sold me on the AirBnB experience if you want to have a local who can guide you to the best local events and eateries.

The morning was misty and cool, which was a welcome break from the 90+ degree humid weather I had been riding through. Riding on the Trace was wonderful (yay!) after spending a week and a half on highways (blech!). I saw one car every 20 minutes and otherwise had the entire road to myself.

When I stopped for a moment to look at directions the silence was so pure that it made me feel immediately connected to the surrounding nature. Those were some of the best moments of the ride.

I met a retired man who took care of beautiful birds and he showed me where the charger was. Unfortunately it was only on a 20Amp circuit (so I couldn't charge at the full rate). Fortunately there was a nearby 110V outlet so I could plug in 2 separate wires and charge at nearly the full 6kW that I usually do.

The retired teacher I met who also rebuilt two electric cars before getting a used LEAF for only $7000!

He also was a former teacher and had rebuilt 2 electric cars that others had made in their garages. His wife recently got a Nissan LEAF, which is why they now have a charging station.

We had an incredible chat about electric cars, the educational systems of the US vs Taiwan, and he introduced me to the finer points of blue jays and doves. This was a completely unexpected, yet incredible, experience. I feel incredibly lucky to have met this man in the middle of nowhere (Deerfield, TN) and we shared an incredible afternoon together.

The final stretch of the Trace was the best part. Approaching Nashville the road is winding and I got to have some fun! At the northern end of the Trace is the Loveless Cafe where I have charged before, but never ate there. It turns out to be a wonderful restaurant!

Showing two Zero motorcycles to coworkers of Michael's (yellow jacket). This was our "album cover" shot.

I shared a meal with fellow Zero rider Michael Beatty and we spent the rest of the day talking about electric motorcycles, showing our bikes to his colleagues and hanging out.

Once I was settled in it was time to meet up with a friend from NYC who recently moved to Nashville and we went swing dancing! Tomorrow is a rest day to visit some other friends and recuperate a bit. My body is aching from all the riding and waking up at 6:40am every day is taking its toll on my mental acuity. Looking forward to a little break before the long trip to Ohio.