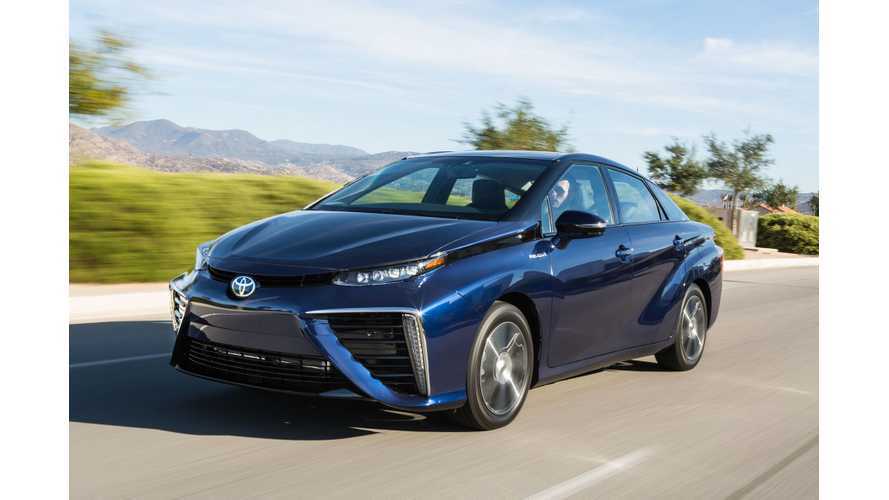 Toyota announced that 312 miles of range makes the Mirai the longest driving range zero emission vehicle on the market.

Well, someone would need to use about 100 kWh of batteries to achieve 300 miles of range in a pure electric car (Tesla 85D has 270 miles of EPA range). Totally doable.

The second number released by Toyota is use of energy: 67 miles per gallon equivalent (mpge). That's only half of some BEVs. Nissan LEAF is rated at 114 MPGe. Plug-in Prius is rated at 95 MPGe (50 using only gas).

In other words, on average, Mirai will struggle to beat event the Plug-In Prius, if electric mode is used often.

“Toyota realized in the early 90’s that electrification was key to the future of the automobile.  Just as the Prius introduced hybrid-electric vehicles to millions of customers nearly twenty years ago, the Mirai is now poised to usher in a new era of efficient, hydrogen transportation.”

Beginning this summer, California customers can request a Mirai by visiting www.toyota.com/mirai.  Customers are encouraged to visit www.toyota.com/mirai today to sign up for more information and notification of exact Mirai order request launch timing in the coming months.

Trip reimbursement covers interruptions that require the Toyota dealership to keep such vehicle overnight and such Covered Vehicle is at the time of such disablement more than fifty (50) miles from the residence of the owner of the Covered Vehicle. See an Authorized Mirai Fuel Cell dealer for details and exclusions."