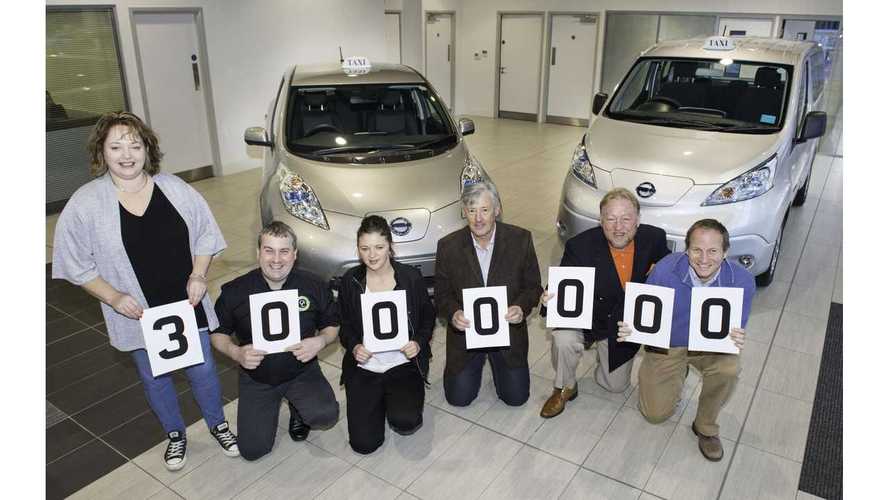 In total, there are more than 140 Nissan EV taxis in operation across Britain and dozens more on order, according to Nissan.

"Had the same distance – equivalent to six journeys to the moon and back or 120 times around the world - been covered in the diesel vehicles the Nissan EVs replaced, it would have cost an estimated £350,000 in fuel. A whopping 899 tonnes of carbon would also have been generated*.

However, with average running costs of just two pence per mile, covering three million miles in the LEAFs and e-NV200s would have cost around £60,000 – a massive saving of £290,000.

With zero tailpipe emissions, the models would also have emitted no carbon during operation, helping to improve air quality in the towns and cities where they operate.

The Nissan LEAF that sparked an electric taxi revolution in Cornwall has clocked up its 100,000th

Nissan mentioned six of the largest and longest-established LEAF/e-NV200 taxi fleets, which in total crossed 3 million miles (including smaller fleets, the number could be significantly higher):

And here are some stats for those cars:

“There can now be absolutely no doubt that the Nissan LEAF and e-NV200 make brilliant taxis.

“Operators across the UK have put them to the ultimate test – running them 24-7 and rapid charging them time and time again to keep them on the road and making money.

“And no matter what challenges the vehicles have faced they have come up trumps.

“As a result, we’ve seen more and more taxi operators, seriously looking into electric vehicles as their existing diesel and petrol vehicles come up for replacement.

“This is a trend we expect to continue and accelerate as the charging infrastructure across the country continues to expand.”