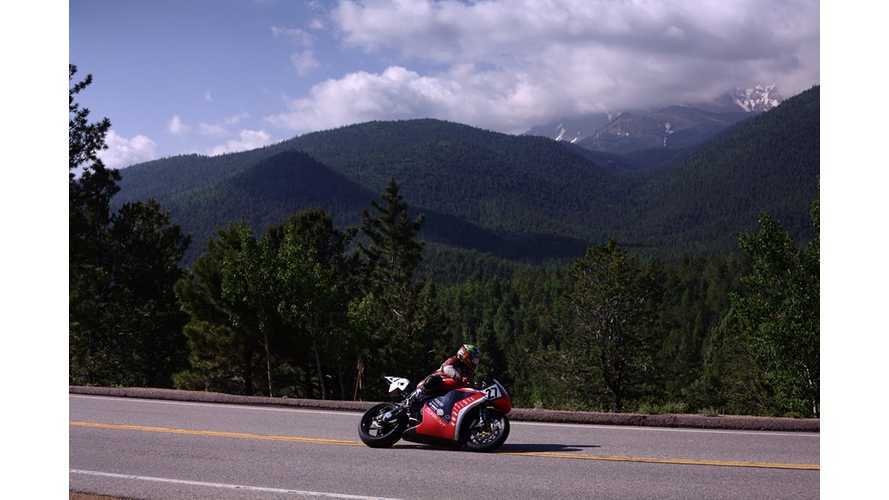 It was an interesting race at Pikes Peak this past weekend, complete with a hail and sleet storm mid-way through the race, and, as we reported, an all-electric win for the top two spots overall.  We cast our votes for our favorites going into the weekend, and, well, let's just say the home favorites got kind of a clobbering.

What a day yesterday. Putting down a blistering 4:19.789 time through the first half of the course, and coming though the speed trap at 121 mph, Joe finally crossed the finish line at the peak with a time of 11:12.756, putting him second in the Electric Modified class and sixteenth overall among all motorcycles.

The Buckeye run, with an exit interview with their rider, Joe Prussiano, here, describing the tech issues.  It sounds like they had some sort of limiting issue, via reports from their tech team, but at this point we don't have specifics.

As far as our other favorites, EVSR from Entropy Racing, watching the live timing of the race on Sunday was nerve-wracking.  There was no reporting about the weather conditions, and long past the time that we expected EVSR to show up on the timing report, they were unaccounted for.  Considering they lost one car when their best driver crashed, we were concerned, at the very least. Later in the day, our fears were put to rest - apparently they were only victims of the weather:

The afternoon view from the summit.

Through rain, snow sleet and hail, Entropy, EVSR, Tim O'Neil and Rick Knoop deliver the goods. Tim narrowly edged Rick out for a third place finish at the 93rd running of the Pikes Peak International Hill Climb in what could be generously called lousy conditions.

Fully prepared for a strong top 1/3rd finish, the weather turned and all runs were shortened to the bottom half of the mountain. Tim was one of the first cars out on a soaked and treacherous track running on full rains on a drying road at the bottom and running water in many places. Those fortunate enough to run before 1 PM were treated to a clean course and perfect weather.

Ah, yes.  On Pikes Peak, a clean course and perfect weather is far from guaranteed.  Still, everybody is coming home safe, and some well-earned congratulations are due all around.

Team EVSR of Entropy Racing and a hard-won 3rd Place

But wait.  What about the Hollywood Electrics team?  Well, looky here - a sweep!

Congratulations to Jeff Clark for his 3rd consecutive checkered flag & to Nathan Barker & Brandon Nozaki-Miller following hot on his heels in 2nd & 3rd in their class!

Here's the run with Jeff Clark, and stay for the exit interview at the very end: