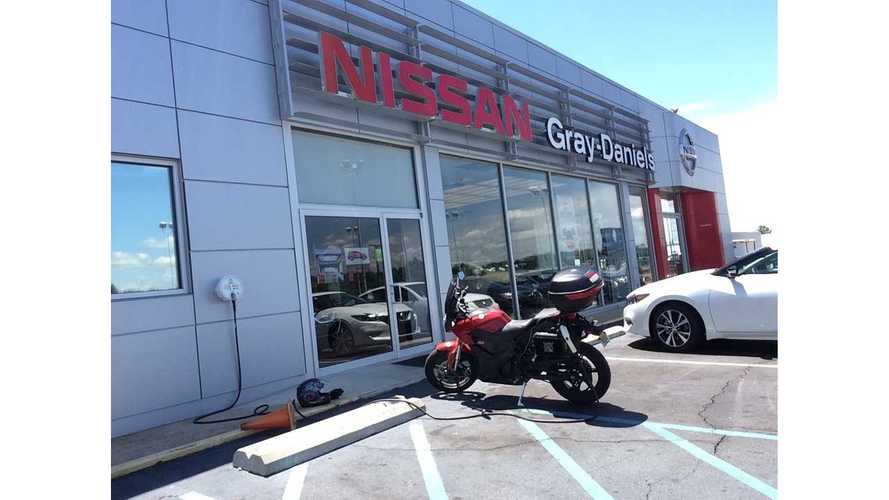 Today was supposed to be about the triumphant return to beautiful riding (which it was), but it also was very stressful in terms of charging.

First, riding up the Natchez Trace Parkway in the morning was a bit magical. The fog was softly lifting through the slanted rays of sunlight peaking through the trees. It was beautiful!

However, I also had other things on my mind. Like the fact that it is Sunday and I may be locked out of my first charging station at a Nissan dealership. I was right.

Since I ride a motorcycle it was pretty easy to get onto the lot and start charging, so I didn't lose any time. But I would prefer to charge at stations where I am welcomed or at least not locked out.

Leaving money after charging at a national park without permission. I love our park system!

The second charging station wasn't much better. It was at a national park and the person I spoke with on the phone was the lowest man on the totem pole, so he didn't actually give me permission to charge. Once I got there I couldn't find anyone in the office so I just charged up, left a couple of bucks for the 4kWh of charge and headed on my merry way.

The last charging stop was fine. I had spoken to the RV Park in the morning and they gave me the okay, so I felt good about that one. But having permission to charge at only 1 of 3 spots today was stressful. Also, each charging station was between 5 and 15 miles away from the parkway, making me "spend" extra miles today.

Relaxing at Lake Choctaw with my toes in the water.

On the other hand, I found lake Choctaw, and it was beautiful! I grew up on a lake so they have a special place in my heart. It was a nice break after all the running around.

Most of the day was spent on the Natchez Trace Parkway enjoying nature and fundamentally having a private road through the woods to enjoy! Looking forward to another day of riding on the Trace, hopefully with better luck with places to charge!

Map of the route along the Natchez Trace Parkway. Charging stations are inconveniently located.