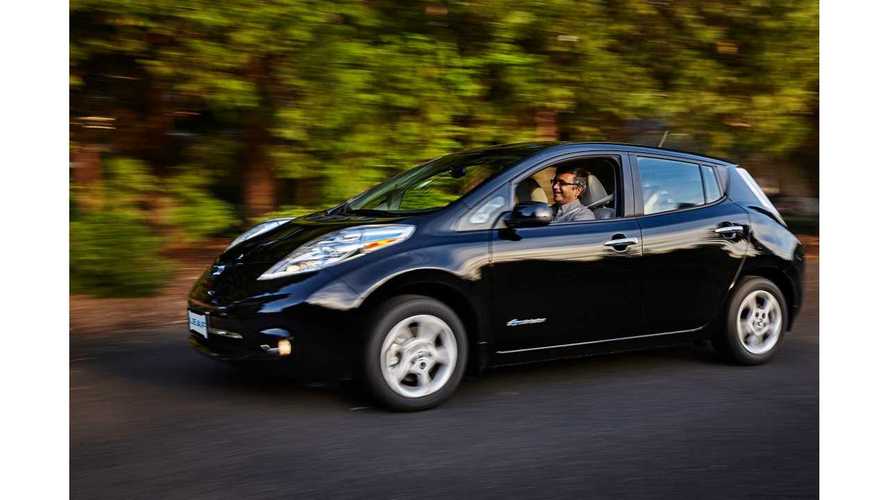 How do we value Nissan's sales of the LEAF this month in the United States?  Good or bad?  High or low?

None of the above.  We are indifferent.

Even though America's besting selling EV crossed the 80,000 vehicles sold mark on the first of the month (82,000+ today), and another relatively strong month was recorded throughout June with 2,074 cars sold, there is just too much going on behind the scenes to give this month's data point much weight of meaning.

Pushing the number higher in June was the expiry of the $5,000 incentive in Georgia at the end of this month; a state which has been responsible for as much as 25% of the car's sales in certain months (although not to those heights as best we can tell thus far in 2015).

Pushing the number lower is the fact the model is getting pretty long in the tooth, as well as Nissan offering big incentives (up to $7,000) for existing customers to retain their leased cars over buying new ones; and the expectation of a longer range (perhaps 105 miles of EPA range), 30 kWh version of today's LEAF in SV and SL trim levels for the 2016 model year holding the 'in-the-know' buyers in check.

Separately this month, the Nissan-Renault Alliance announced they had sold over 250,000 all-electric cars and vans to date, with more than 180,000 of them being LEAFs.

What's This? 544 Kilomters (338 miles) of Range In Next Gen LEAF? Give us half that on the EPA scale and we'll say mission accomplished Nissan

But before anyone gets too excited (or sells all their Tesla shares), one has to remember this presentation was in Japan; and therefore we assume those high numbers where achieved by using estimated mileage based on the local Japanese JC08 standard, which loosely translated means "aided by a dozen unicorns and a strong tail wind".

Still, if the all-new, next generation of Nissan LEAF (expected to arrive in Q2 2017) has 200 miles of range, we would be fairly thrilled just the same.  Heck, we'll take 175 miles.