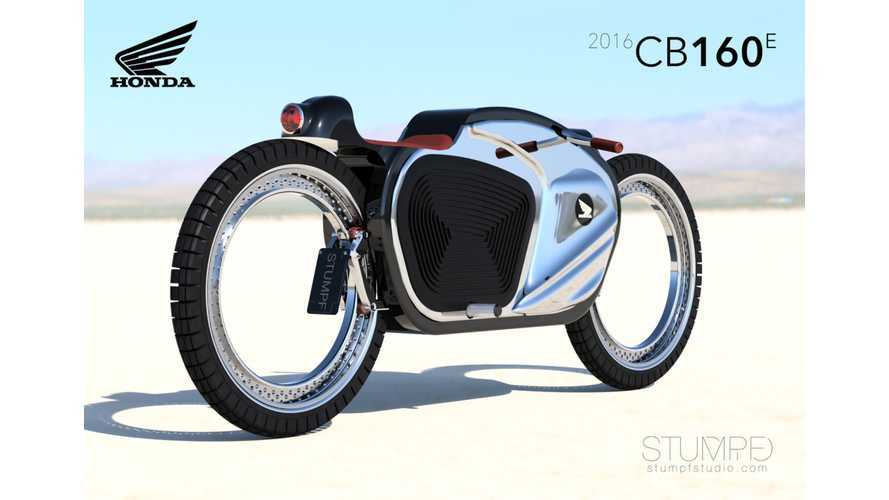 We're pretty much of the opinion that designers get to have all the fun.

This time our buddy, James Stumpf, sent over the latest from his drawing board (can we still call it that?) paying tribute to the legendary Honda 160 in a not-so-subtle way.  If it's not readily apparent from the rendering above, let's look at this view:

Oh, the irony.  An entire electric bike built with a body style based on a gas tank?  Oh, mercy.  Visual puns aside, here are some more views:

Black (and chrome) on black

Top view with a look at the control panel

Here's where you get an idea of what James is envisioning as the specs:

Now then, why do we feel like they get all the fun?  Because, well, they can imagine and "develop" whatever they think might be cool, right?  Like Dual MagDrive Wheels.

So how based in reality is this little trinket?  The "magdrive" wheels make it so we don't need conventional suspension, judging from the fact that there's, well, no conventional suspension, and figuring there are two of them, even just by hub motor standards, they are going to be adequate for a top speed of just over 100mph.  Can he fit 16kWh of energy into that, er, "tank"?  Sure thing, that seems reasonable.  A 160 mile range?  Sure, that's reasonable too, with a 16kWh pack.  As for the "Electronic Twist Throttle", we already have those, but the "Electronic Twist Brake"?  That's something we'd have to see.

The 160e is actually pretty based in reality, after all.  Except those wheels, which seem to defy Newton's Laws, something we never really like to do.  Could this be built with conventional hub motors?  Sure, no problem, but then you've got to add all that tacky suspension and steering stuff.

Just for those who don't really get the pun, here's a shot of a '65 Honda CB160 from a random ebay listing.

See more of James' work on his site: Stumpf Studio, including his "Tesla Model 3".