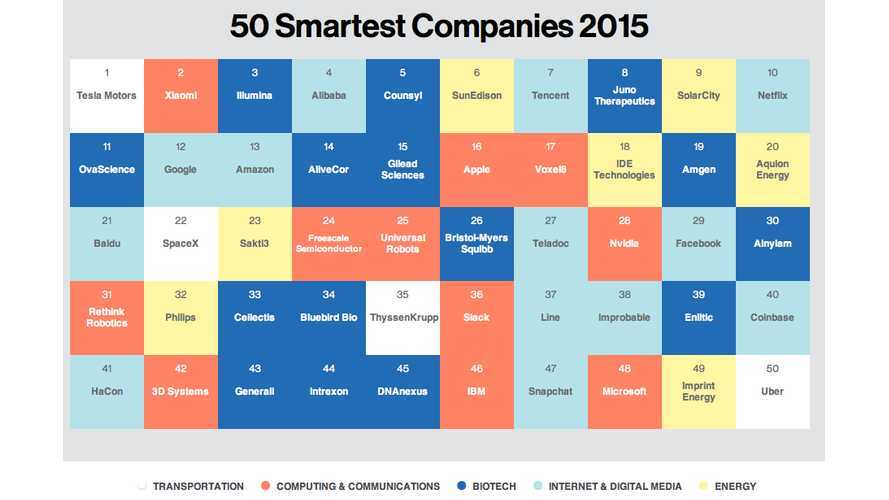 For 2015, MIT lists Tesla Motors as the world's smartest company. Why did Tesla come out on top? MIT states:

"To make the list, a company must have truly innovative technology and a business model that is both practical and ambitious, with the result that it has set the agenda in its field over the past 12 months.

No. 1, Tesla Motors, has added another audacious idea to go with its electric cars. In April, it announced it would be spinning off a line of batteries in service of a big goal: remaking the energy grid for industry, utilities, and residences."

As you can see in the list below, there are different colors to represent different categories:

Considering that that Tesla vehicles can somewhat drive themselves and that Elon Musk wants to create affordable public transportation that travels ~ 800 MPH (the Hyperloop) and is investing ~ $5 billion into a lithium-ion battery production site (The Gigafactory), we think that Tesla belongs in the #1 spot.

"A few giants return after an absence from the list: Microsoft, at No. 48 for its wearable HoloLens device that blends virtual reality and the real world, and Apple, No. 16, for its well-designed smart watch and digital-wallet service. All share one feature: they are innovations with impact. —Nanette Byrnes"