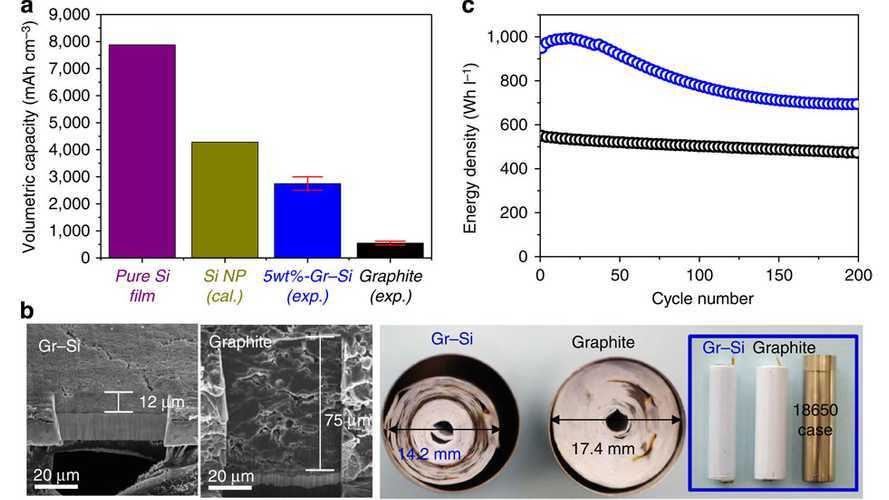 Recently scientists at SAIT released a paper on a new silicon anode with graphene, which when paired with a commercial cathode (LiCoO2), gave them volumetric energy density of 972 and 700 Wh L−1 at first and still at the 200th cycle. On the gravimetric densities they achieved 242.0 and 169.6 Wh kg−1.

The volumetric energy density, which corresponds to the size of the pack, is very high. According to the article, 1.8 and 1.5 times higher than those of current commercial lithium-ion cells (graphite//LiCoO2).

"Silicon is receiving discernable attention as an active material for next generation lithium-ion battery anodes because of its unparalleled gravimetric capacity. However, the large volume change of silicon over charge–discharge cycles weakens its competitiveness in the volumetric energy density and cycle life. Here we report direct graphene growth over silicon nanoparticles without silicon carbide formation. The graphene layers anchored onto the silicon surface accommodate the volume expansion of silicon via a sliding process between adjacent graphene layers. When paired with a commercial lithium cobalt oxide cathode, the silicon carbide-free graphene coating allows the full cell to reach volumetric energy densities of 972 and 700 Wh l−1 at first and 200th cycle, respectively, 1.8 and 1.5 times higher than those of current commercial lithium-ion batteries. This observation suggests that two-dimensional layered structure of graphene and its silicon carbide-free integration with silicon can serve as a prototype in advancing silicon anodes to commercially viable technology."

This new concept of dealing with large volume change of silicon over charge–discharge cycles, could in next few years enable Samsung to produce more capable batteries.