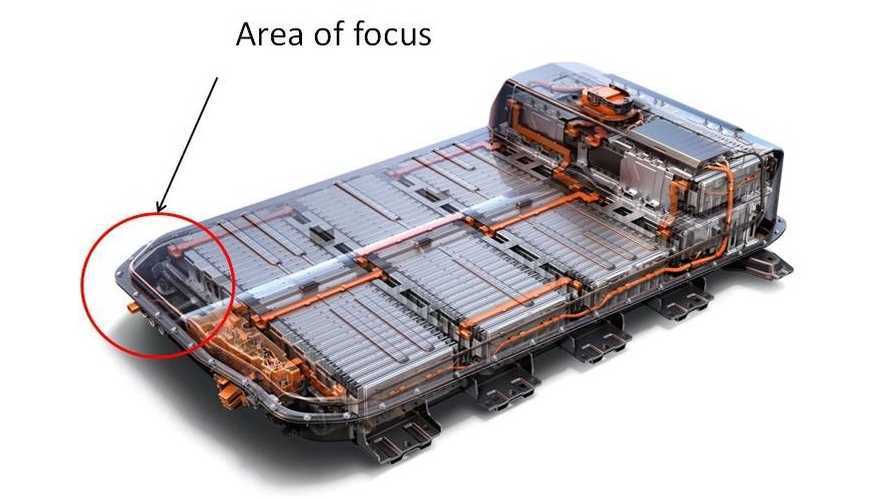 Keep it Simple is the rule of the day

GM Volt and Spark EV use thin prismatic shaped cooling plates in between the cells with the liquid coolant circulating thru the plate.

The BMW i3 cools the bottom of the battery case with refrigerant eliminating the liquid coolant entirely.

The Volt cooling scheme is very effective from a cooling point of view but it is complicated. The cells are encased in multiple plastic frames.

The problem with this scheme is there are multiple potential points where leaks can develop since there needs to be a seal between each plate but we must point out that there doesn't seem to be a lot of problems reported in production Volts. Tesla's system is simpler and less prone to leaks since each battery module has one continuous cooling tube.

This "repeating frame" cooling system seems to have been abandoned in the Bolt. Here is an excellent video animation of the Bolt EV battery pack and power train:

At 1:04 minutes into the video we can see one three cell group being removed from the pack. The active inter cell cooling plates that were used in the Volt are totally absent . Instead we a see a passive plate which is wrapped around each cell. Keep it simple.

Where does the liquid coolant go? It does not appear to be between the cells as used in both the Volt and the Tesla.

Consider this high resolution slide of the Bolt battery pack.

Now look at a close up view .

In this photo we can see what appears to be liquid coolant connection fitting on the front of the pack. Inside the pack we can see liquid coolant tubes. We know they are liquid and not refrigerant tubes because GM has told us so in the early spec release.

The following "bottom cold plate description" is not directly from GM but is based on the author's inferences from GM's high resolution photo of the Bolt's battery pack.

We can also see that the liquid coolant tube drops down to the bottom of the pack into a flat black plate. The authors believe this is a bottom cooling plate. Bottom cooling plates for battery cooling are not unprecedented. The BMW i3 uses it and GM had just such a system in the Spark EV when A123 was  the supplier of the Sparks battery. This Spark bottom cooling plate was abandoned however when LG Chem was chosen as the battery supplier for the 2015 Spark in favor of the cooling scheme used in the Volt.

The Chevy Spark EV uses a very compact gearbox arrangement called a co-axial gearbox. It is co-axial because the centerline of the electric motor is also the center line of the axle shafts. Another unique part of the Spark co axial gearbox was the planetary gear reduction set.

Tesla Model S, and BMW i3 however use simple parallel-helical single speed gear reduction gear sets. What do we see in the Bolts Gearbox?

It is still a co-axial gearbox. The drive shafts are on the same axis as the motor.

However, the gear reduction set is now a simple parallel-helical gear set like Tesla and BMW i3.

Simple and lower cost than a planetary reduction set that was used in the Spark.

GM followed the "keep it simple" principal in the Bolt without sacrificing performance. This is essential if we want lower cost EV's for the masses that are also fun to drive.

Co-Author of the piece, Keith Ritter is a mechanical engineer, and licensed professional engineer with over 35 years of experience in heating ventilation and air conditioning systems.