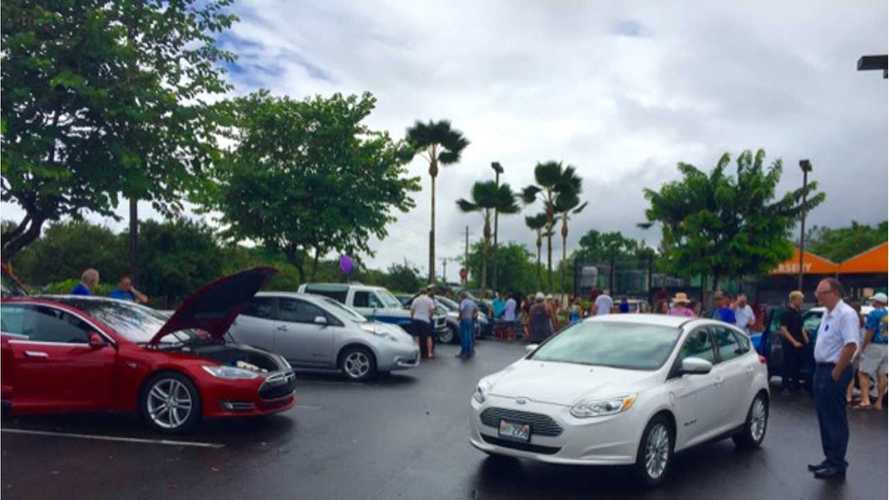 2015 National Drive Electric Week, held from Sept. 12 to 20, turned out to be another success with record attendance.

Breaking its own record again, National Drive Electric Week 2015 tallied 196 events in 187 cities this year with more than 130,000 people attending events coast-to-coast across the U.S. and Canada, in Hong Kong and New Zealand.

2016 LEAFs and the Chevy Bolt EV concept debuted on the the West Coast, but the true value was presence of all kinds of electric cars, conversions and other electric vehicles.

Separately, places like Hong Kong took up the event for the first time.  Of which InsideEVs' own Alex Wai represented, helping the event along.

"Once again we’ve seen that National Drive Electric Week produces concrete results that boost sales in addition to raising awareness of plug-in vehicles from neighborhood to board room.”

"National Drive Electric Week’s record-breaking events show that Americans want to move forward – they want clean energy and they want 21st-century solutions to climate disruption. With more chargers in the ground and EVs on the road than ever before, it’s clear we’re driving forward, not backwards – clean energy is here, and it’s here to stay."

The 6th National Drive Electric Week is already scheduled for Sept. 10 through 18, 2016 as Plug In America, the Sierra Club and the Electric Auto Association team up to support events organized by local groups.

Here we have several photos and videos from various places:

Kent, WA - Ryan Fulcher burns rubber instead of oil as he lights up the tires on his stock 2011 Nissan LEAF before racing against Ron Easley in his 2013 Nissan LEAF at Pacific Raceways in Kent, WA. Teslas and various other electric vehicles can be seen waiting in the staging lanes in the background. (Photo Credit: Aakanksha Gavalli)

"EV drivers from all over Broward County gathered in Lauder Ale, to enjoy some hand crafted beers while sharing tips, stories and an insight to their own cars. It was a very nice event where drivers could also meet with Florida Power & Light as well as with car charging companies like Doc Bornee."

"On September 12th we hosted of a National Drive Electric Week Event in Ft. Lauderdale Florida called DRIVING THE FUTURE.

"These cars were filmed at the 43rd Annual Electric Vehicle Show, hosted by The Electric Auto Association of Silicon Valley and SF BayLEAFs, one of the many events held September 12 - 20 in more than 180 cities in more than 40 states during the 5th annual National Drive Electric Car Week. The events are designed to showcase the speed, convenience, clean-air benefits and fuel cost-savings of electric vehicles."

"Jann and Bill go to the Boulder Drive Electric Week event, apart of the National Drive Electric and check out some new all electric cars, bikes and motorcycles by Tesla, Nissan, BMW, and others. Joe Castro the city of Boulder facilities and fleet manager talks to us about the event and what it means to the city and our environment as well as how you can get in on the movement."

"#NDEW2015 National Drive Electric Week 2015 at Satellite Beach, Florida on September 19, 2015. This was taken at the end after a few EVs had already left so there were actually more there during the day! Also take note of the NASA moon buggy mock up! It was brought because it was one of NASA's first electric vehicles. https://driveelectricweek.org/ http://spacecoastevdrivers.com/"

This year’s highlights included the world debut of the 2016 Nissan LEAF and the West Coast debut of the Chevy Bolt EV concept. These vehicles came together at Los Angeles’ event, which alone featured roughly 1,000 ride-n-drives out of roughly 9,000 total. Events from Hawaii to Maine also delivered parades, rubber-burning races, panel discussions and more. Every major plug-in model available in nearly every state was represented.

With total plug-in sales on pace to double that of plug-less hybrids for their first five years, Drive Electric Week resulted once again in EV sales, such as in Hong Kong, whose celebration included 500 test-rides in a country with only 2,500 EVs on the road.

Some events triggered first-time discussions with office holders and businesses about such EV advancements as boosting local infrastructure. Events also served as platforms for officials to make such announcements, with dozens of new charging stations inaugurated during the week. In Baltimore, Mayor Stephanie Rawlings-Blake announced the city’s installation of a fast charger, the city’s first, and a pilot program allowing city employees to test four different EVs for the city’s fleet.

National Drive Electric Week, which will be held next year from Sept. 10 through 18, 2016, showcases the cost-savings, clean-air benefits and fun of plug-ins. Plug In America, the Sierra Club and the Electric Auto Association team up to support events organized by local groups.

"National Drive Electric Week’s record-breaking events show that Americans want to move forward – they want clean energy and they want 21st-century solutions to climate disruption,” said Michael Brune, Sierra Club's executive director. “With more chargers in the ground and EVs on the road than ever before, it’s clear we’re driving forward, not backwards – clean energy is here, and it’s here to stay."

Perhaps the most productive activity of the week: James Haberberger and his wife, Katie Epps, drove to the hospital from the Bluffton, SC event James organized to welcome their son, Conor Alexander Epps, in to the world. A few days later, James reported, “my son Conor had his first ride in an electric car as we brought home our new bundle of joy.”

Nissan and its all-electric LEAF have served as the event’s exclusive automotive sponsor since 2013. ClipperCreek, SunPower and Schneider Electric are also national sponsors and PlugShare is media sponsor.

About Plug In America: Plug In America, a San Francisco-based national nonprofit organization, works to accelerate the shift to plug-in vehicles powered by clean, affordable, domestic electricity to reduce our nation's dependence on petroleum and improve the global environment. The organization conceived National Drive Electric Week and has advanced workplace charging by pioneering ride-and-drive events at such leading corporations as Google, Mattel and Paramount Pictures. It developed the world’s largest, most dedicated network of plug-in vehicle owners and drivers, many of whom have driven EVs for well over a decade. We drive electric. You can too. www.pluginamerica.org

About the Sierra Club: The Sierra Club is the nation’s oldest and largest grassroots environmental organization with more than 2.4 million members and supporters and chapters in all 50 states. The Sierra Club’s national electric vehicles initiative advocates for a switch to EVs as one important way to reduce emissions and cut oil consumption. Sierra Club is proud to have been one of the three national groups organizing National Drive Electric Week since its inception in 2011. www.sierraclub.org/EVGuide