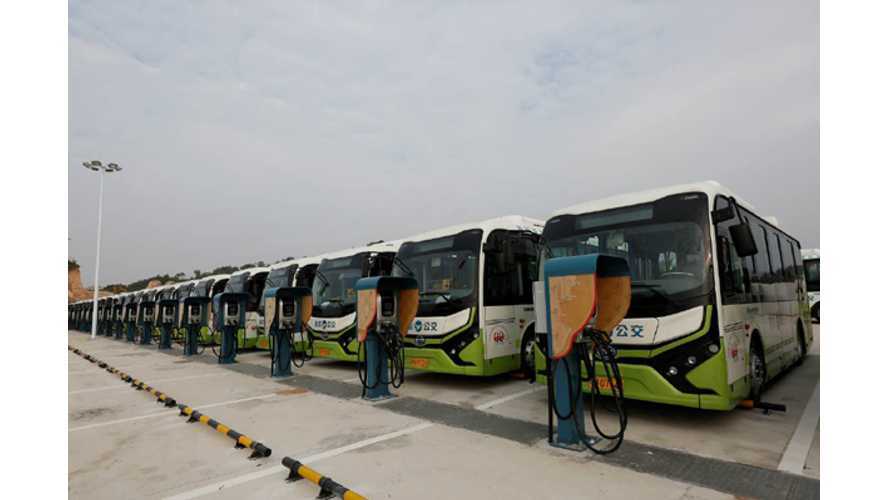 BYD feeds us with photos of endless electric bus queues in China these days.

It seems that BYD  provided one DC fast charging station for every bus.

In response to the urge from China Central Government and Guangdong Province Government to boost development of energy vehicles, Shanwei has taken a series of sustainable transportation actions, chiefly with public transit integration (with a 0 to 50km range) and transit network setup. Last September, the City Government along with Guangdong Yueyun Transportation Company and BYD Company Ltd. signed a strategic cooperation framework agreement for new energy vehicle application and promotion project. The three parties will cooperate to introduce BYD’s cutting-edge pure electric buses and seize the company’s mature operation experience to make Shanwei greener and cleaner. The Shanwei Government is currently building an EV manufacturing base and developing the accessory industry chain. BYD’s new energy vehicle fleet will be essential for the Administration to achieve its sustainable economic growth targets."

The most important part of the news is that Shanwei is gearing-up to purchase a total of 3,010 electric buses  (including 1,200 6-8-meter like BYD K7).

"According to the City Government, 1,810 pure electric buses will be put into service by the end of 2017. Additionally, 1,200 units of 6-to-8-meter new energy buses will be used as short-distance transit buses in urban areas and shuttle buses in suburban areas between 2017 and 2019. The BYD K7 is ideal for the 1,200 order of new energy vehicles. By 2019, the city of Shanwei will have a total of 3,010 pure electric buses in operation. It is the first city in China to make large-scale use of the K7. The city of Wuhan will also introduce 74 units of the K7 in the same week. According to the Administration, in 2016 Shanwei will meet Guangdong Province’s demands that there must be at least 8 public transit buses for every 10 thousand people."

"The BYD K7 is a 8-meter, 23-seat pure electric bus running on BYD’s proprietary Iron-Phosphate batteries, which grant it a driving range of up to 240km on a single charge. The battery packs are placed on the roof and floor, making it quite spacious inside. It also features in-wheel motors, which saves a lot in terms of maintenance costs, as well as one-button-start system and continuously variable transmission. The model is ideal for urban transit or as an airport shuttle. BYD’s electrified public transportation solutions are already in operation in over 160 cities in more than 40 countries."