Renault ZOE Named "Best Electric Car Under £20,000" By What Car? For Third Year In A Row 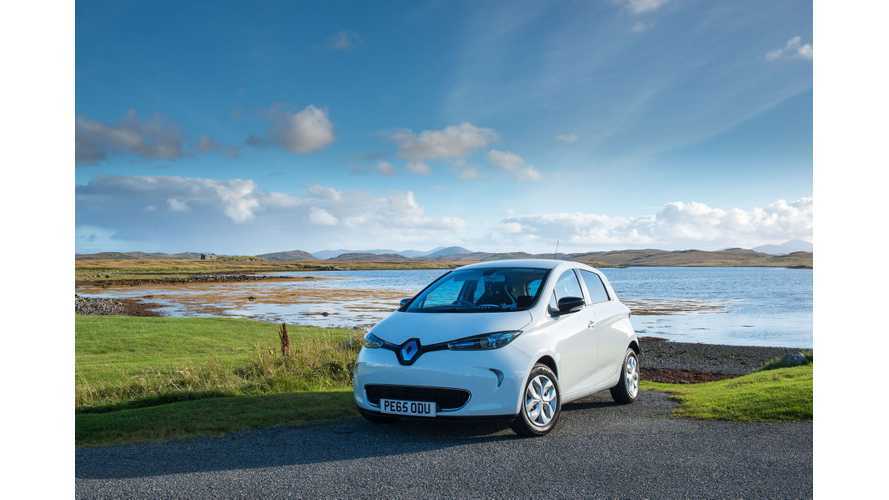 The folks over at British site What Car? really appreciate the Renault ZOE and have named it the "Best Electric Car under £20,000" for the third consecutive year (see report from previous year).

"The Renault ZOE has been recognised by the judges at What Car? for the third consecutive year, picking up the title of What Car? 2016 ‘Best Electric Car for less than £20,000’ with its pure electric ZOE Dynamique Nav Rapid Charge hatchback."

Commenting on the decision to give ZOE the award for a third consecutive year, Jim Holder, Editorial Director, What Car? said:

“The Renault ZOE was our favourite electric car for less than £20,000 a year ago, and tweaks to the specification and the added ability to go further have only increased its appeal. The ZOE’s main strength is that it feels like a conventional, stylish, nippy small car that happens to cost pennies to run. The electric motor has enough shove for the ZOE to lead the charge away from traffic lights, and the cabin seats four in reasonable comfort. Even the boot is larger than you’ll find in many regular small cars – easily big enough for a week’s shopping."

“The rapid charger means that you can get the ZOE’s battery from flat to 80 per cent of its capacity in as little as 30 minutes, using one of the fast charging public points. With a full charge, you’ll be good for around 90 miles – more than enough for the average commute. Renault even includes installation of a home charger in the price. The standard kit list looks good, too, with a reversing camera and an excellent infotainment system with satellite navigation included with our preferred trim level.”

“The ZOE proves that zero emissions in use vehicles can be stylish and practical with sales more than doubling in the UK last year, in an EV market up 48 per cent, as more and more motorists recognize ZOE, not only for its environmental credentials but for its ultra-low running costs, serene driving style and high standard of specification.  We’re thrilled that What Car? has recognised ZOE’s talents for the third year in a row.”

"The ZOE is an all-electric, five-door family hatchback available in three trim levels that comes with a high level of standard specification, despite its competitive price-tag, including items such as climate control and sat-nav.

ZOE can charge from zero to 80 per cent full in as little as 30 minutes thanks to its patented Chameleon™ Charger that allows it to make the most of the widest range of power supplies and also keep charging times to a minimum.  The official NEDC range is up to 149 miles – Renault estimates that in real-world driving conditions that this equates to around 93 miles in summer and 62 miles in winter.

ZOE is available to purchase in two ways. Firstly, under a battery hire scheme, where ZOE pricing starts at £13,445 after the Government Plug-in Car Grant with battery leasing from £55 per month. Benefits include a lifetime performance guarantee for the battery and 24/7 roadside assistance – even if you run out of charge.

You can also buy your ZOE outright. ZOE i ‘full purchase’ models start from £18,445 after the Government Plug-in Car Grant, giving the buyer full ownership of the car and battery and no monthly battery lease payment.

ZOE sales were up 102 per cent in 2015 to 2,053 vehicles, significantly outpacing the UK electric vehicle market, which was up 48 per cent on 2014. ZOE is the second best-selling electric car in the UK representing one in five EVs sold. ZOE is one of three models in Renault’s diverse electric vehicle range which also includes the Twizy urban roundabout and the Kangoo Van Z.E."