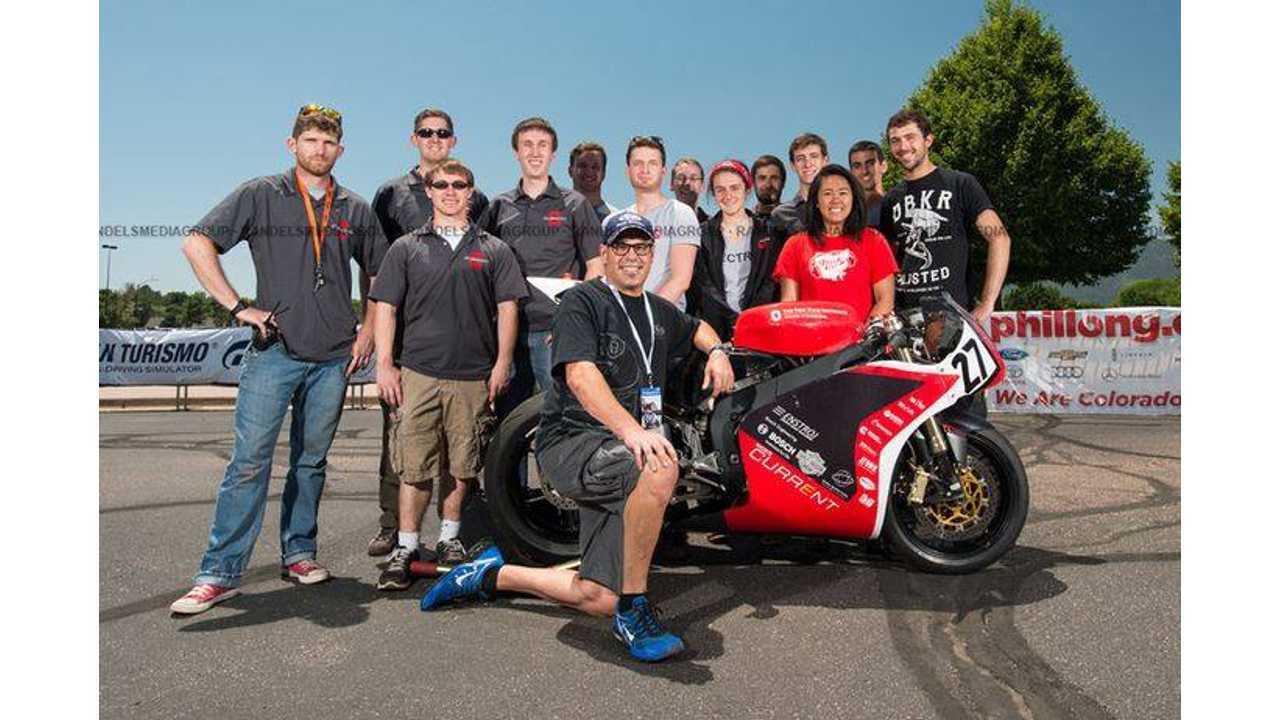 We wouldn't be entirely honest if we didn't come right out and say we have some favorites going into the Pikes Peak Hillclimb coming up this weekend, and the Ohio State Buckeye team is pretty much at the top of the list.  Because: heart.  As reported in their press release, their veteran rider, Rob “The Bullet” Barber, hit a patch and crashed, sustaining minor injuries to the bike, and injuries to Barber that would force him to step down.  (He's on the mend, and will be able to cheer from the sidelines, on his new electric, albeit, kind of slow, mount.)

Rob “The Bullet” Barber on his new ride

This year's bike has seen a complete rebuild and refit after the podium-snagging Isle of Man run last year.  From the release:

RW-3 is designed to average 76 miles per hour through the course with a top speed of 125 miles per hour. The battery pack holds 7.8 kilowatt-hours of energy on board and contains 972 individual 18650 cylindrical battery cells.

Their goal?  Nothing less that a record-setting run for all motorcycle classes, period.  To do that, they'll have to beat out the Lightning bike's record setting run of 2013.

That's not the only bike team we're interested in, though.  Our buddies at Hollywood Electrics are hitting the hill again, (what is this, the third year now?) with a team of three riders: Jeff Clark 777, Nathan Barker 880, & Brandon Nozaki-Miller 111 on Zero bikes.  Check out the vid here:

Yeah, OK, we like cars too. The fact that Monster Tajima (Rimac) is awesome goes without saying, and if you missed his 1MW dyno run you have to go back and see it in our story last week.  But, cool as that may be?  They don't got a rig like this:

Yes, folks, Team EVSR from Entropy Racing has built a third car, and this is their one-of-a-kind Big Yellow Transporter loaded up to head off to Pikes, for their first-ever Pikes experience.  These cars are proof that electric racing can be practical and affordable, as owner Charlie Greenhaus explains:

In addition to the desire to conquer one of auto racing’s premier courses, Entropy Racing is competing in the PPIHC to show the world what the EVSRs can do. The team thinks that the EVSR is the perfect car for everyday club racers—enthusiasts who want to race, but don’t have loads of money or advanced mechanical skills.

And running costs are only about half as much of comparable gas-powered machines, with drastically lower maintenance costs. In fact, this car is so affordable that you could build 20 EVSRs for the same cost as four Formula E racers with maintenance and service costs at pennies on the dollar. It could give a great race experience to enthusiasts who couldn’t normally afford it.

Lead Driver Charles Turano is a two-time EMRA champion who has also raced in NASA and SCCA. He’s been the lead driver in many 12-hour races as well as the first 25 Hours of Thunderhill endurance race in 2003.  Turano’s expertise also extends to the instructor’s seat—he’s the chief instructor for both Entropy Racing and IMG, and has also instructed for NASA, SCCA and SCDA. Turano brings his formidable engineering and programming experience to the high-tech EVSR program as well.

Tim O’Neil has been racing since the 1980s and he’s collected some serious hardware over the years. He’s a five-time U.S. and North American Rally Championship winner and one of the few American rally drivers to compete internationally. Entropy Racing tapped Tim to take the #82 EVSR up Mount Washington in 2014, and O’Neil set the Climb to the Clouds electric record at 7 minutes and 28 seconds. When he’s not competing, O’Neil runs the Team O’Neil Rally School.

Rick Knoop won the 1978 24 Hours of Le Mans, conquered Pikes Peak, and twice competed in the American Le Mans Series—once in a Porsche 911 GT3-R in the GT class, and once in a Highcroft Racing MG-Lola EX257-AER in LMP1. This gifted driver has done time in the Grand-Am Sports Car Series, won at Daytona and was a factory driver for Toyota, Mazda, Porsche, Ferrari, BMW and BF Goodrich. Rick also drove the Knoop-Mann Special to a 2nd-in-class finish in last year’s Pikes Peak International Hill Climb.

Well, that's all very cool, with the antique hauler and all, but did they make it?  That's one thing you have to understand about this team.  When they say they're going to do something, it gets done.

Now, just in case you think this is all pretty sanitized and not really that scary?  Here's a shot from the EVSR Facebook page, with a 150' downward detour and the subsequent fetching up against a boulder:

...we can make light of it, because thankfully the driver - Charles - is fine, the safety gear all worked as intended, and some invaluable, but hard-earned data was collected as a result - Number 84, however, is out for this year.

Best wishes and a SAFE RACE to all our faves!  (...and everyone else racing this weekend, too!)