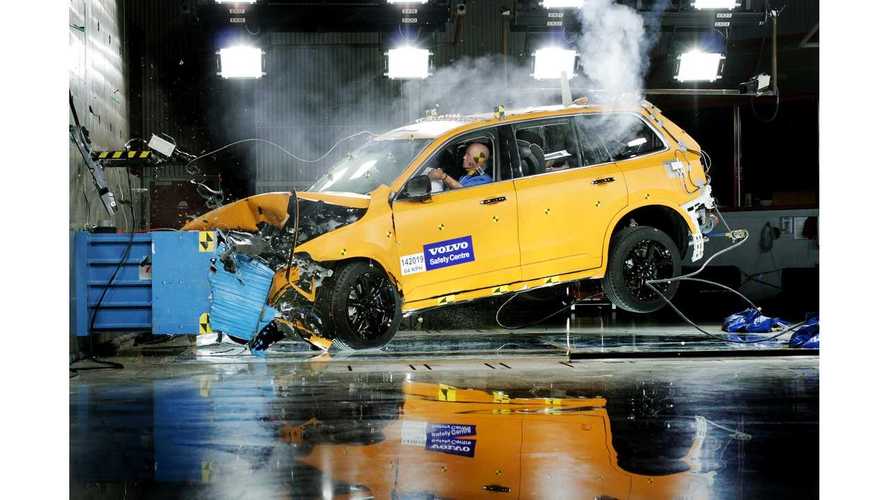 Volvo XC90 is so happy that he did a somersault

First, the XC90 was named 2016 North American Truck/Utility Of The Year.

And now, the XC90 is listed by Euro NCAP among the Best in Class cars of 2015 (of course this contest is only for models scoring five stars).

Volvo XC90 had the best overall safety performance of 2015 and was the best performing vehicle in the large off-roader class.

We are curious now to see the Tesla Model X - Volvo XC90 comparison in crash tests. Both automakers are known for their focus on safety, though Volvo's track record dates back way further than Tesla's.

"In 2015, the new full width frontal test has, as was hoped, had a significant influence on the fitment of rear seatbelt pre-tensioners and load-limiters across all sectors and autonomous braking technology continues to become more widespread. The ratings showed a marked difference between newer cars that have been developed for the latest safety technologies and older vehicles, whose safety has not been updated and which now lag behind the leaders.

The best performing large off-roader, and the car with the best overall performance of 2015, was Volvo’s XC90. The Swedish company’s new flagship achieved an outstanding 97 percent for adult occupant protection and a maximum 100 percent for its safety assist technologies."

"Volvo’s ground-breaking XC90 SUV has received further recognition for its role in redefining the SUV segment – this time in the familiar Volvo territory of safety – receiving the 2015 Best in Class award for both Large Off-Road and Overall Performance categories.

The Volvo XC90 achieved overall top performance in the 2015 Euro NCAP ratings, scoring 100 per cent in the Safety Assist category,  and an outstanding 97 percent in adult occupant protection, reflecting the innovative approach that Volvo Cars continues to take when developing new safety systems.

“We are always happy to receive further recognition for the work we do. The XC90 embodies everything that Volvo Cars stands for, and this is further proof of our continuing leadership in the field of both active and passive safety systems. Our vision is that by 2020 no one should be killed or seriously injured in a new Volvo car. With the latest safety and semi-autonomous drive functionalities in the XC90 we are well on our way to fulfilling that vision,” said Jan Ivarsson, Acting Director, Volvo Cars Safety Centre.

The Euro NCAP announcement, which celebrates the “outstanding performance” of the XC90 comes hot on the heels of a host of prestigious awards the new SUV has collected in recent months, including the Motor Trend Car of the Year, North American Truck of the Year and the Auto Express Car of the Year to name but a few.

Sales of the XC90, which continue to outpace production capacity, have had a seismic effect on the Swedish premium car maker’s transformation journey. 2015 saw sales reach an all-time high, with over 503,000 cars sold."

Time to crash some cars:

Euro NCAP Frontal Impact takes place at 64 Km/h, 40% of the width of the car striking a deformable barrier. In the Full Width test, 100% of the width of the car the car impact a rigid barrier at 50 Km/h. In the side impact, a mobile deformable barrier impacts the driver's door at 50 km/h. In the pole test, the car tested is propelled sideways at 32 km/h into a rigid pole."