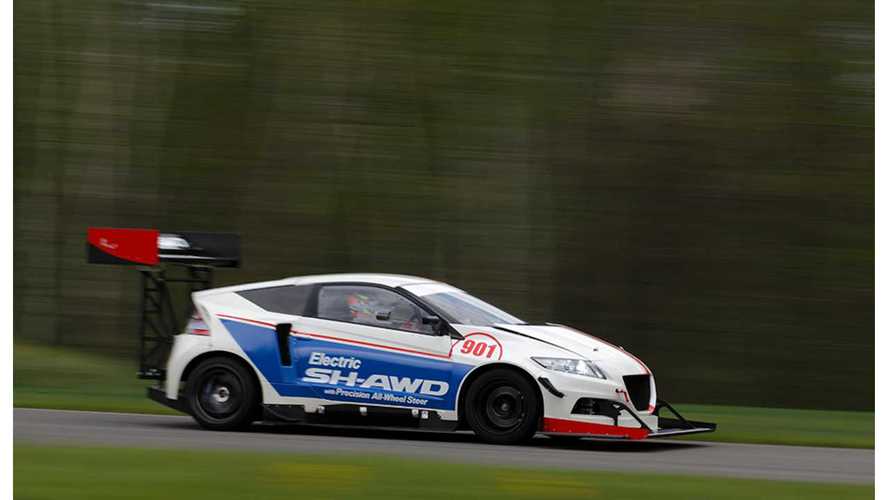 Honda brings to the Pikes Peak International Hill Climb an interesting new prototype, which is shrouded in mystery. And we are not talking about the Honda-powered HPD ARX-04b LMP2 with a 3.5 liter V6 engine.

We are talking about electrified an CR-Z (Electric SH-AWD with Precision All-Wheel Steer), assigned to Pikes Peak Challenge- Exhibition category with Tetsuya Yamano on-board and number 901.

But we don't know anything in regards to the drivetrain, which according to some sources is pure electric!

Well, there is some general information on the AWD and AWS systems implemented:

There is an interesting article on the project on the motoring.com.au:

"Japan’s third largest car-maker has taken a current model CR-Z and fitted it with four electric motors — technology inherited directly from the Legend’s rear-motor SH-AWD (Super Handling All Wheel Drive) system, but now extending to motors on both the front and rear axles.

Entered in the Challenge Exhibition category, the Pikes Peak CR-Z "is a prototype that Honda has created to test how electric drive handles when pushed to the absolute limits,” says a source inside Honda.

This is nothing new for Honda, which introduced the electrified SH-AWD system in the Legend and will also incorporate it into the front axle of the NSX.

Honda's e-AWD technology will eventually permeate all of Honda’s sports models, but the system that powers the Pikes Peak CR-Z will not be a pointer to the production CR-Z.

“Do not expect to see the new CR-Z as a road-going version of the Pikes Peak car," said our source. "We are only using it as a racing test mule for an all-wheel-drive electric powertrain, one that will most probably not be used on the next CR-Z."

Boasting an updated version of SH-AWD, the Pikes Peak CR-Z will feature independently operating electric motors that not only distribute torque to all four wheels depending on demand, but also offer a new generation rear-wheel steer function that is said to enhance cornering speed.

It's understood Honda is currently evaluating a petrol-electric powertrain incorporating the same turbocharged three-cylinder 1.0-litre engine that will power the S1000, paired with an electric motor to develop a total power output of 162kW.

Such a powertrain would be ideal for the CR-Z, but a replacement for the discontinued compact coupe appears far from certain.

“Truth be known, our engineers might be working on a more efficient electric four-wheel drive system in the Pikes Peak CR-Z, but that will not directly lead to a road-going all-electric CR-Z. We still need to evaluate exactly where a new CR-Z would fit into our sports car hierarchy,” said our insider.

“I should tell you that while we are looking at the potential of electric 4WD in the Pikes Peak CR-Z, the powers that be in our R&D section are leaning strongly towards channelling development funds away from the CR-Z and into an S2000 successor."