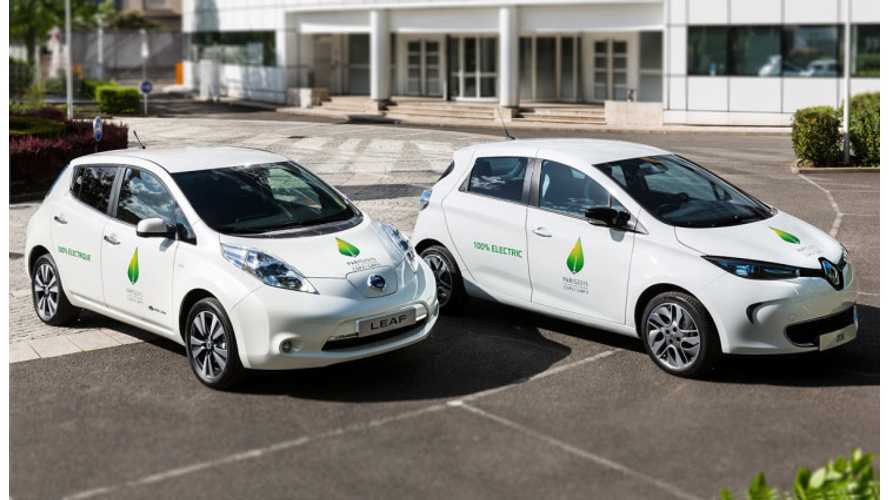 That's 4.5 years after introduction of the Nissan LEAF in Japan and US.

"The Alliance reached the historic milestone in early June, 4 ½  years after the launch of the Nissan LEAF, the world's first mass-market zero-emission vehicle.*  The Alliance today accounts for half of the electric vehicles sold worldwide. Nissan LEAF remains the best-selling electric vehicle of all time, with more than 180,000 units sold.

From January through May, the Alliance sold about 31,700 EVs -- up nearly 15 percent over the same period of last year."

"*No CO2 emissions and no regulated atmospheric pollutants while driving according to homologation cycle (NEDC)."

Overall, sales of Renault-Nissan Alliance EVs are growing this year, by nearly 15% to 31,700 units over the first five months of 2015.

Carlos Ghosn, Chairman and CEO of the Renault-Nissan Alliance said:

"Demand for our electric vehicles continues to grow thanks to government incentives and the expanding charging infrastructure. The positive response of our customers is also driving demand. These vehicles enjoy some of the highest levels of satisfaction rates from our customers around the world."

As montioned, there is significant disproportion on EV sales by Renault and Nissan with Renault making up just 65,000 of the 250,000 EVs. Because the French company markets its electric cars mainly in Europe, this partly explains the difference - in Europe, Nissan sold 41,500 LEAFs, while sales of Renault ZOE alone stand at some 26,000 (but since beginning of 2013).

"With six models on the road, the Renault-Nissan Alliance is the only global car group with a full range of 100% electric vehicles. In addition to the LEAF, Nissan also sells the e-NV200 van, which has been on sale in Europe and Japan since last year. In addition to the ZOE, Renault also sells the Renault Kangoo Z.E van, the SM3 Z.E. sedan and the Twizy, a two-seater urban commuter vehicle.

Yokohama, Japan-based Nissan has sold 185,000 electric vehicles worldwide since December 2010, when the Nissan LEAF went on sale. LEAF has collected numerous industry honors, including the 2011 World Car of the Year, European Car of the Year 2011, and Car of the Year Japan 2011-2012. The LEAF is sold in 46 markets. Nissan's top EV markets are the United States, with about 80,000 sales since LEAF's launch, Japan with about 53,500 units, and Europe with about 41,500.

Renault, based in Boulogne-Billancourt, France, has sold 65,000 electric vehicles worldwide since its first model, the Kangoo Z.E., went on sale in October 2011. Kangoo Z.E. was voted International Van of the Year 2012."

The 250,000th electric vehicle specifically sold by Renault-Nissan Alliance was the Renault ZOE:

"The 250,000th owner is Yves Nivelle, a computer engineer, who traded in his 21-year-old diesel car for the subcompact Renault ZOE. Nivelle bought his EV after the French government introduced an environmental bonus in April to allow owners of older, polluting diesel cars to trade them in and get a rebate of €10,000 on a new EV."

"The government's environmental bonus was a big factor in my decision to get an EV. But I have to say, I was convinced the first time I drove the car. It's a real pleasure to drive and it feels good to do my part for the environment."