Exclusive: Inside The Chevrolet Bolt With Its Chief Engineer - New Details 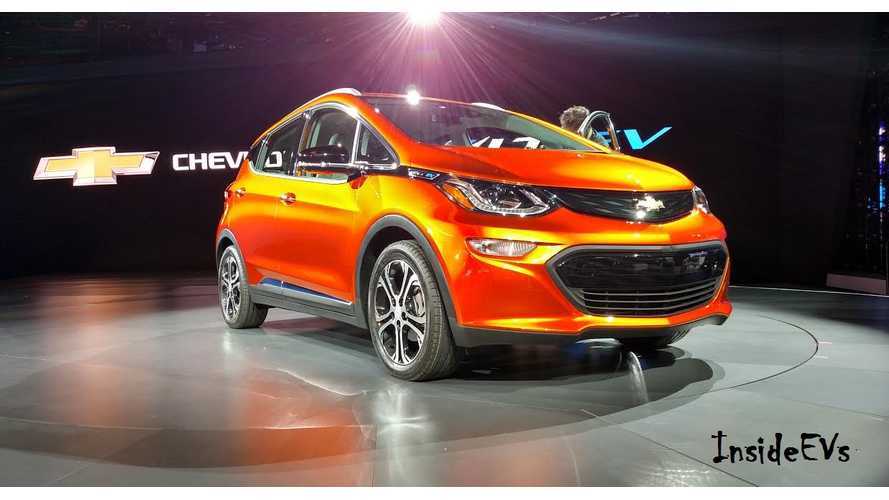 This week at the North American International Auto Show I had the opportunity to sit down with Chevrolet Bolt EV Chief Engineer Josh Tavel. We covered a variety of topics related to the Bolt EV, which was the cornerstone of the Chevrolet press conference at NAIAS this year.

I started out asking Tavel what he felt were some of the biggest challenges his team faced with the Bolt.

“This is a very different car.”

"You might expect me to answer this by saying one of the major components like the battery or electric motor, but that really wasn’t the case. We’ve been doing batteries and electric motors for a long time at Chevrolet so they’re known entity for us."

"The biggest challenges were really because the vehicle architecture of the Bolt is different. It’s the unique packaging of the Bolt which was probably the biggest challenge. It affects everything. Some of the predictive models, the CAE (computer aided engineering) work really well with conventionally powered vehicles, but when you take yourself out of that architecture and apply it to this new type of vehicle, they don’t work that well, so we really had think differently. There were a couple of areas where we had to take a different approach, because this architecture is so different than anything we’ve ever done.”

“In crash testing, cars have unique crash test signatures, but the results of the Bolt are unlike any other car. That said we’re feeling really good about us being at the top of the segment from a safety perspective.”

He went on to talk about how they spent time slimming down the front seats in order to give the rear passengers more leg room and save weight, but how that then affects crash testing, and how the battery tray is incorporated into the main structure to increase the stiffness of the chassis.

The Bolt has two driving modes, Drive and Low. The regen level in normal mode is minimal, and basically simulates how a conventional car without regenerative braking feels. I specifically asked him to describe how “Drive” mode feels. Tavel explained:

“It’s still in the same field as a normal car. There are normal cars that have as much natural decel as the Bolt in Drive; it’s not out of the norm. Originally it was tuned such that if you were to take 100 people and monitor them coming to a stop light, and monitor that decel, and let’s say it would be about .2g’s. The Bolt was designed for .2g’s – to basically act like a conventional car. But the problem was, sometimes you need a little bit more, and it didn’t give it."

"So actually just this past December we were all out in LA and I said ‘You know guys, this is stupid. It feels like were making the one pedal driving be kinda acceptable for the people that don’t like it, and kinda acceptable for the people that do. Why are we doing this halfway? If they don’t like it, they have drive (mode), the i3 for instance, doesn’t have a drive mode with light decel. So if they don’t like regen, go to drive. If they want it, give it to them (low mode with heavy regen).’ So now we’re at a spot where I can drive home and never touch the brake pedal.”

Inside The 2017 Chevrolet Bolt At NAIAS: (InsideEVs / Paul Raszewski - TEVA)

In addition to the Low drive setting, the Bolt has a Regen on Demand paddle on the steering wheel. So there are actually four different levels of regen with the level of deceleration getting stronger at each level below:

In order to come to a complete stop while in Drive mode, the driver will need to use the friction brakes. In these conditions, when they release the friction brakes, the car will creep forward. Artificial creep and whether or not it belongs on an EV has been a highly controversial topic and one debated amongst the plug in community. The Bolt has a unique way of dealing with it. If you don’t like strong regen and use drive mode, the engineers feel you probably like how a conventionally powered car performs and they give you artificial creep.

However, if you like strong regen and use low mode, or stop with using the Regan on Demand paddle, the artificial creep is disengaged. In those circumstances, the car will hold its position there, even if on an incline. There is no need to depress the friction brake. However, if the operator does press the friction brakes after coming to a stop using the regen, and then releases the brake pedal, the car will creep forward.

With Tesla currently charging at over 100kW, and Audi & BMW talking about the new 150kW system they are working on, I asked Tavel what would be the highest speed of DC Fast charging the Bolt would accept. It’s clear this topic is one that is still being internally discussed, but I also got the feeling it will most likely be limited to what the current hardware in the ground can deliver, that being 50kW.

Looking In The Back: 2017 Chevrolet Bolt At NAIAS ( InsideEVs / PaulRaszewski)

I drove a MINI-E for two and a half years so I know how a front wheel drive EV with lots of torque can feel. The MINI-E was a blast to drive, but under full acceleration I needed to hold the steering wheel tightly with both hands to keep it from jerking from side to side from the torque steer. I wanted to know how the Bolt would feel with 200 hp and 266 lb-ft of torque going to the front wheels.

“We’ve got some special controls in there for that. Our steering system and our EBCM (electronic brake control module) has some pretty slick calibrations in there to combat torque steer. You can feel a little bit of it but I think it feels fine. There’s a lot of power up there so if you were to remove the controls we put in place the torque steer would be pretty wicked.”

Comparing the Bolt to the Volt

“The Gen 2 Volt I think is a great car. Amazingly, I’d like to say that I believe we’ve worked it out so that performance wise we’re equal to where the Volt is. To me, there is no competitor I wanted the Bolt to be like. I think the Volt, the Gen 2 Volt specifically, is a really well done car. And that is a car we compare ourselves to a lot.”

Why the traditional gear shifter?

Since electric cars don’t really require a gear shifter, and some manufacturers like BMW, Nissan and Tesla have ventured from the norm of the traditional gear shifter on their electric offerings, I asked why the Bolt has what looks like a gear shifter for a traditional automatic transmission. Tavel was quick to dismiss the need to change what works.

“This isn’t some funky looking car that’s some whizzy statement. This is a mainstream car that happens to be propelled by electrification. It’s not some unique quirky little thing. (I couldn’t help but think he was referring to the BMW i3 here) It’s a real, no kidding, good car. It’s already an electric shifter, if you pull that away the car gets maybe a little more different than you might want, and quite honestly I think there are some questionable safety issues if your reaching up and moving things up there that I don’t think as a company we want to go to right now.”

Side note: Right as I was asking this next question, Carlos Ghosn and his entourage were escorted onto the platform behind us to have a private look at the Bolt on display. I couldn’t hear exactly what they were talking about, but he wasn’t smiling.

The Bolt’s press release from GM stated the Bolt incorporated advanced materials including aluminum, magnesium and carbon fiber to help lightweight the vehicle. I asked him if he can explain where these materials were used, and how they helped save weight. Tavel was surprised there was a claim that carbon fiber was used on the Bolt, and in fact told me he believed that was incorrect. As for the use of advanced materials and light weighting, he said:

2017 Chevrolet Bolt On The Road

The Tech Inside (InsideEVs / PaulRaszewski)

With more and more advance electronic features becoming available in today’s cars, I asked if the Bolt would feature any of these technologies. I specifically asked if the Bolt would have adaptive cruise control, lane departure assist, self parking, automatic braking or any autonomous driving features and I was a little surprised to hear it won’t, not even as optional equipment. They will however introduce a few new features that weren’t on my list. Tavel explained:

“No. Adaptive cruise control - no, you would need the blended brakes to do that and we didn’t want to do that with this car. However, all the standard side blind zones, rear cross traffic alert, ten air bags, all that’s there. What’s new is the optional Rear Camera Mirror. You normally have a 22 degree field of vision with a standard mirror, this takes you to 80. We also have optional Surround Vision, which you know is the 360 degree camera system. We’re still working hard to perfect it, but I’m told it’s the best one camera systems the guys have seen so far."

Overall, I really got the feeling Tavel was extremely proud of the Bolt. He took particular pride in talking about how different this car is from anything GM has ever produced, and that his team worked relentlessly on every small detail to try to achieve perfection. While they are still actively improving things, they are actually pretty close to a finished product.

In fact, he said GM has executive test drives every week, and after some of the top brass drove the Bolt last week, they told Tavel he could release the car now, and as far as they are concerned it’s finished. He’s not satisfied yet though, and that’s what you’d expect from your chief engineer.