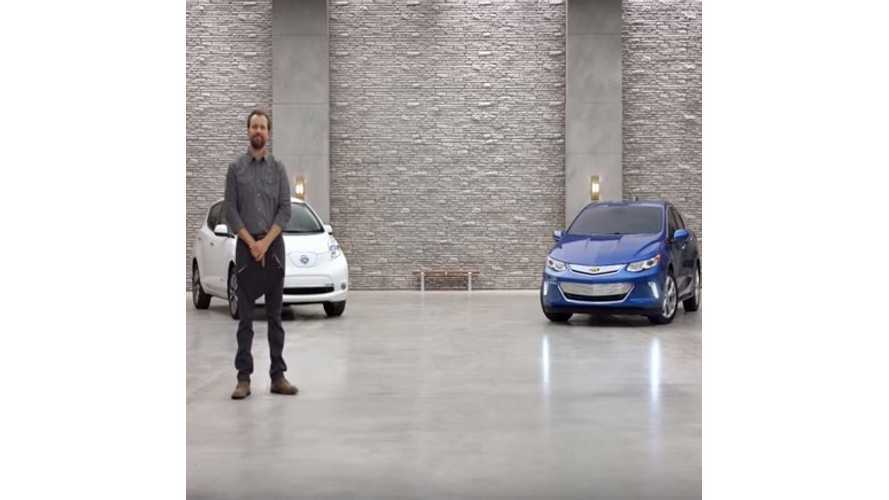 A pair of what can only be described as competitive/attack advertisements have surfaced for the 2016 Chevrolet Volt.

These ads have debuted in their extended "internet versions" - both running north of 2 minutes a pop.  GM will also air condensed versions of the same ads for the television audience.  We will add the TV spots when they become available.

"Watch and see what happens when people find themselves stuck in a situation out of their control."

We are happy to see GM advertising the new 2016 Volt strongly, but what stresses us a little about the Volt spot in regards to the LEAF, is that it actually seems to promote dis-information about Nissan's EV, by choosing to reference only the base LEAF's 84 mile range, ignoring the new 2016 model's 107 mile abilities.

And we aren't sure what message GM is conveying about their own 82 mile Spark EV, or upcoming 200 mile Bolt for that matter.

As this ad just hit the internet, and we assume was made long before Nissan's announcement on the new range (September 10th), we hope that GM ultimately decides to remove this reference, as the ad could still stand on its own without it.

"Technology changes fast. Watch as people are shown technology from the recent past and react to how far things have come."

"Do you know what else has come a long way? The Chevy Volt. With its state-of-the-art battery technology, take charge with greater range and leave those outdated competitors behind."

In the end, we probably would have preferred if GM would have focused more on the 2016 Chevrolet Volt itself, and its pretty exceptional qualities.

53 miles of electric range + 42 MPG thereafter =  big savings over petrol cars and better for the environment.

It is pretty much says it all right there in the window sticker.