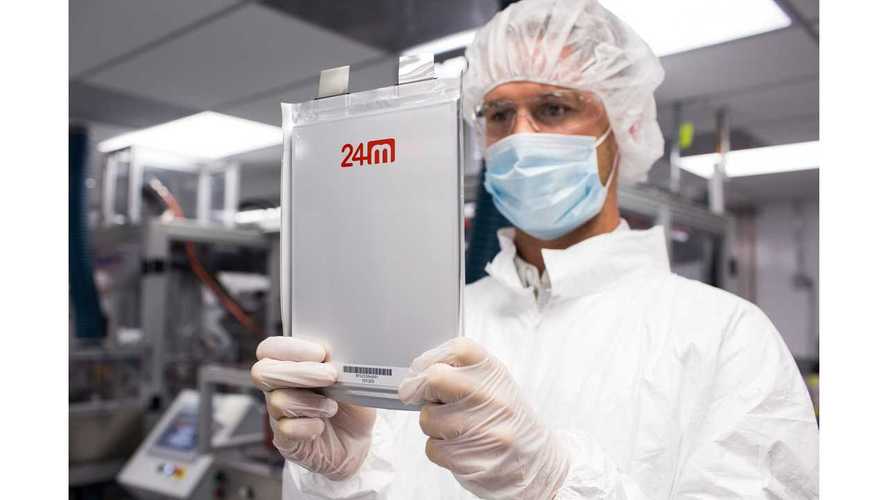 24M was founded in 2010 and since then raised $50 million in private capital. One of the co-founders is MIT’s Dr. Yet-Ming Chiang, who was also co-founder of A123 Systems.

24M believes that costs will be dramatically reduced by new design of the cells (below $100/kWh by 2020):

Until now, the energy storage field has had two options to try to drive down costs – build massive and complex factories to produce lithium-ion batteries in high volumes or pursue entirely new chemistries that may never move from the lab to the commercial floor. With the invention of the semisolid lithium-ion battery, 24M presents a third option – work with the world’s preferred energy storage chemistry and unlock new opportunities for cost reductions through new cell design and manufacturing innovations. 24M’s platform is the most significant advancement in lithium-ion technology since its debut more than 20 years ago."

“The lithium-ion battery is a brilliant, enabling technology, but its economics are flawed. It’s prohibitively expensive; it’s cumbersome and inefficient to make; and today’s version is approaching the limits of its cost reductions. 24M has fixed the flaws. We’ve made the world’s favorite battery better, fundamentally changing its cost curve by designing a more elegant and simpler cell and then making the batteries the right way – the way they should have been made from day one.”

But the costs are not the only advantage, as it turns out.  More energy, better performance and easy recycling were mentioned.

Well, as we don't see even the preliminary spec sheet of the cells, it's hard to say whether those batteries will fit electric vehicles. We will watch 24M on the radar.

24M’s simple but breakthrough cell design is made possible by the semisolid thick electrode – a material science innovation originating in Dr. Chiang’s lab at MIT. Conventional lithium-ion battery cells have a large fraction of inactive, non-charge carrying materials – supporting metals and plastics – that are layered, one-on-top of the other, within a cell’s casing. Those inactive materials are expensive and wasteful. With the invention of the semisolid thick electrode, 24M eliminates more than 80% of these inactive materials and increases the active layer thickness over traditional lithium-ion by up to 5x. Using thick electrodes, the cell also stores more energy, bettering the performance of the battery as well as its cost.

“We give the architects of our energy future everything they love about lithium-ion at a cost they love too,” said Throop Wilder, 24M’s CEO. “Together, our inventions achieve what lithium-ion has yet to do – meet the ultra-low cost targets of the grid and transportation industries. By 2020 our battery costs will be less than $100 a kilowatt-hour (kWh). We’re emerging at the right time with the right technology.”

Since its founding in 2010, 24M has raised $50 million in private capital, closing Series A and B rounds, from Charles River Ventures, North Bridge Venture Partners and industrial partners. The company is also the recipient of a $4.5 million grant from the U.S. Department of Energy. 24M’s cells are currently undergoing customer trials with large, global integrators of power systems for the grid. The company now employs more than 50 people and runs a fully automated manufacturing line from its 32,000 square foot facility in Cambridge, Massachusetts."