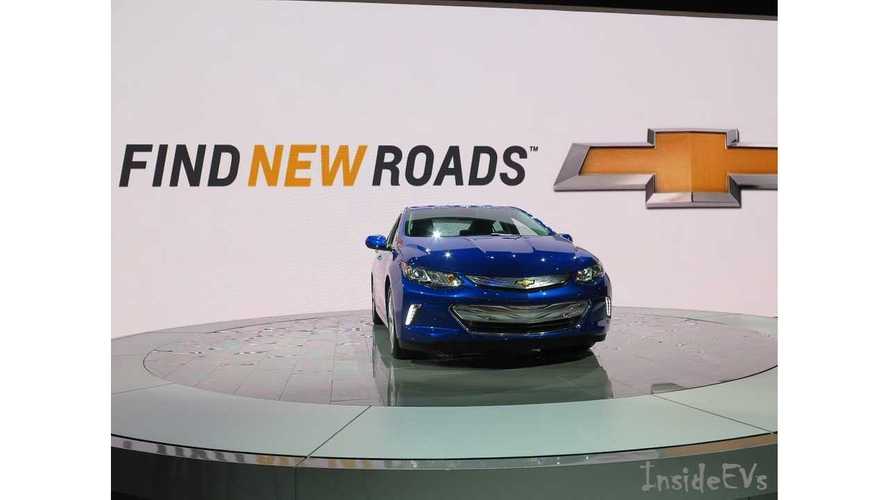 Very quietly, General Motors announced that it will deploy a fleet of 2017 Chevrolet Volts "designed to drive autonomously within its renovated Warren Technical Center campus" in late 2016.

This fleet of autonomous Volts will be used by employees who will be able to reserve a car by using a car-sharing app.

This is the first time we've heard General Motors mention autonomous-drive and Volt in context together.

Here's how GM describes the program:

"Autonomous Vehicle Deployment: GM announced that late in 2016 it will add a fleet of 2017 Chevrolet Volts designed to drive autonomously within its renovated Warren Technical Center campus. GM employees will reserve a Volt using a car-sharing app, then select a destination. GM’s autonomous technology will bring the vehicle to its destination and park it. The program will serve as a rapid-development laboratory to provide data and lessons to accelerate the company’s technical capabilities in autonomous vehicles."

The autonomous Volt announcement was part of a larger press release in which GM CEO Mary Barra discusses the automaker's grander personal mobility goals for the future.

GM Outlines Plans to Capitalize on Future of Personal Mobility

MILFORD, Mich. – General Motors Co. (NYSE: GM) CEO Mary Barra and her leadership team today outlined the company’s plans to capitalize on the future of personal mobility by owning the customer relationship beyond the vehicle, building upon nearly two decades of connectivity leadership.

GM also said it plans to strengthen its core business through global growth initiatives and an aggressive product launch cadence, while continuing to focus on driving cost efficiencies. As a result, the company expects to increase its earnings per share and generate significant shareholder value. The company shared its plans with investors during a conference at its Milford Proving Ground.

“The convergence of rapidly improving technology and changing consumer preferences is creating an inflection point for the transportation industry not seen in decades,” said Barra. “Some might find this massive change to be daunting, but we look at it and see the opportunity to be a disruptor. We believe our decades of leadership in vehicle connectivity is fundamental to our quest to redefine the future of personal mobility.”

Autonomous Vehicle Deployment: GM announced that late in 2016 it will add a fleet of 2017 Chevrolet Volts designed to drive autonomously within its renovated Warren Technical Center campus. GM employees will reserve a Volt using a car-sharing app, then select a destination. GM’s autonomous technology will bring the vehicle to its destination and park it. The program will serve as a rapid-development laboratory to provide data and lessons to accelerate the company’s technical capabilities in autonomous vehicles. GM has been testing its “Super Cruise” autonomous driving technology since 2012, and confirmed today the feature will be available in the 2017 Cadillac CT6.

Car Sharing: GM also announced two new car- and ride-sharing projects, one in New York City operating today and one to come in first quarter next year in another U.S. city. Each project will further expand the company’s participation in alternate transportation models, which the company anticipates will generate additional revenue and profits. These will amplify the company’s recent car-sharing projects to test hardware and software systems and gain insights into car-sharing user experiences. For example, one of GM’s first mobility partnerships was with Google early last year, where it tested a commuter ride-sharing service using Chevrolet Spark EVs. Using an app, drivers and riders were matched based on trip patterns and schedules. The project demonstrated value and potential in creating automotive transportation services, leading to other initiatives like its New York City program announced today. In Europe the company’s Opel brand has also recently deployed a peer-to-peer sharing service called CarUnity, which incorporates dealers and their fleets to provide an array of available vehicles for sharing. In China earlier this year a fleet of EN-V 2.0 electric concept vehicles went into service at Jiao Tong University in Shanghai as part of a multi-modal campus transportation system alongside bicycles, cars and shuttle buses.

eBike Concept: GM unveiled an electric bike, or eBike, concept during the conference, demonstrating the company’s evolving view of “mobility” in an ever-changing, increasingly urban world. Designed and engineered at GM’s engineering and development center in Oshawa, Ontario, the eBike concept was designed to help people stay mobile in an increasingly difficult-to-navigate urban landscape.

Fuel Cell Propulsion: Another technology helping GM set the pace in achieving zero emissions is fuel cell propulsion. GM has been working to advance hydrogen fuel cells for a decade, launching its first fuel cell electric vehicle in 2007. In collaboration with Honda, it is developing a next-generation hydrogen fuel cell stack and hydrogen storage systems. GM confirmed its plans to jointly develop a commercially viable fuel cell vehicle with Honda in the 2020 timeframe. Because the technology can also provide promising financial rewards, GM indicated it is pursuing non-automotive fuel cell applications for the aerospace and military industries.

Mixed Materials: GM is intensely focused on reducing weight in every vehicle it develops, since lighter vehicles are better able to meet increasingly stringent global CO2 standards and offer consumer benefits including efficiency and enhanced performance. The company is using an array of materials, including various grades of steel, aluminum and composites, to help make vehicles stronger, safer, more fuel efficient and fun to drive. Engineers are using a mix of materials more cost effectively than ever across all GM brands and making them accessible to customers at various price points. The 2016 Chevrolet Malibu, for example, incorporates 11 different materials and, as a result, is nearly 300 pounds lighter than its predecessor while the next-generation Camaro is almost 400 pounds lighter than the current model.

Exclusive Mixed-Metal Manufacturing Techniques: GM’s R&D team has invented another patented, industry-first welding technology to allow the use of more lightweight metal on future vehicles. This resistance spot-welding process enables the welding of aluminum to steel, which helps make vehicles lighter and more structurally robust. The process will be adopted at the Detroit-Hamtramck plant on the Cadillac CT6 in the first half of 2016.

The company expects to grow its business over the next five years through key initiatives including a $5 billion investment in an all-new Chevrolet growth market vehicle family; maintaining a strong market position in China by enhancing its presence in SUV and luxury segments; expanding Cadillac’s vehicle portfolio into growing luxury segments; continuing the growth of GM Financial through the expansion of services globally, and expanding aftersales and OnStar revenue opportunities globally.

GM is also accelerating its efforts to drive further cost efficiencies across the value chain, with a focus on enhancing overall value for its customers. The company said it expects to generate benefits of approximately $5.5 billion in purchasing, manufacturing and administration expense between 2015 and 2018, more than offsetting increased investments in brand development and technology.

General Motors Co. (NYSE:GM, TSX: GMM) and its partners produce vehicles in 30 countries, and the company has leadership positions in the world's largest and fastest-growing automotive markets. GM, its subsidiaries and joint venture entities sell vehicles under the Chevrolet, Cadillac, Baojun, Buick, GMC, Holden, Jiefang, Opel, Vauxhall and Wuling brands. More information on the company and its subsidiaries, including OnStar, a global leader in vehicle safety, security and information services, can be found at http://www.gm.com.