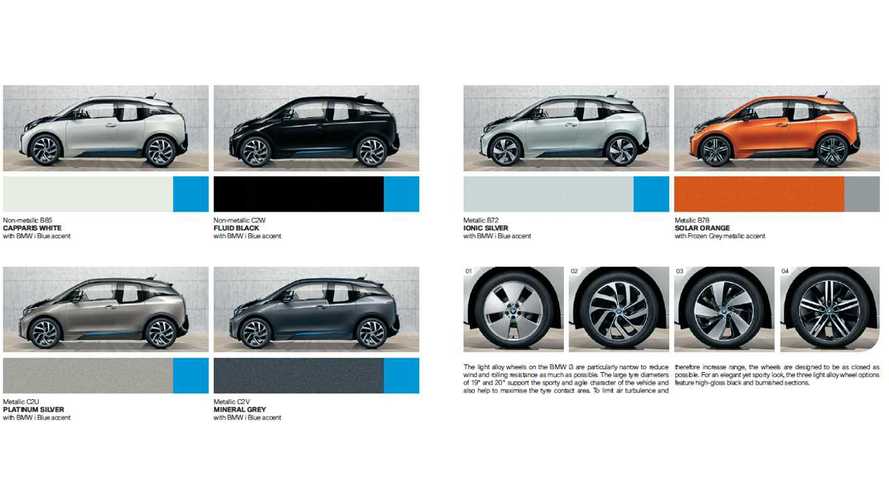 BMW has added three new color options for the i3 in 2016. At the same time though, they have deleted three colors, so the i3 is still available in six different colors. The pessimist may say, "It's still only available in Solar Orange, and fifty shades of grey," and while they wouldn't be entirely incorrect in saying so, I think the changes are an improvement over what was previously offered.

The best addition in my opinion is the new Fluid Black. I had the opportunity to see a Fluid Black i3 in person earlier in the year and I was instantly sold. I believe this is going to be the top selling i3 color in 2016, and I would have ordered my car with it if it were available in 2014. So the i3 color options in 2016 will be as follows:

The original Capparis White, Ionic Silver and Solar Orange remain available. Arravani Grey, Laurel Grey and Andesite Silver have been dropped and Fluid Black, Platinum Silver and Mineral Grey have been added. You can download the 2016 i3 PDF brochure which has the color chart from this link.

*Editor's Note: This post appears on Toms' blog. Check it out here.

The changes are really not too dramatic, but do make sense. The two least popular colors, Arravani Grey and Andesite Silver have been dropped, along with the very popular Laurel Grey. Andesite Silver was replaced with what appears to be (in pictures at least) a very similar, Platinum Silver. Arravani and Laurel Grey have been replaced with a single grey color option called Mineral Grey. From the pictures, it looks like it's a combination of the two previously offered grey colors. It's lighter than Laurel Grey was, closer to what Arravani Grey looked like, but it's metallic like Laurel Grey.

Laurel Grey almost looked black in certain conditions. This picture is of me on my delivery day back in 2014.

These changes to the grey offerings make total sense, especially when you consider that there is a black paint option now. Laurel Grey was very dark, and even looked like it was black if you were standing at a distance, or if it was parked in the shade. I believe that the Fluid Black color would decimate sales of Laurel Grey because it would be so close. By combining Arravani and Laurel Grey, and offering a lighter colored, metallic grey which is clearly different than Fluid Black, there is enough color separation for both colors to coexist.

Arravani Grey (or Battleship Grey as I called it!) will no longer be offered.

One of the things I like about the new Fluid Black is that the car is monochromatic with it. I'm not totally against the i3 having a black hood as an accent for certain colors. In fact, I think it looks great with Capparis White and Solar Orange in particular, but I also think that the i3 looks good in certain colors without the black accent, or "Black Belt", as BMW calls it. I wrapped my car red the first week I got it because I wanted a color that popped and also wanted to see how it would look in all one color without the black hood. I'm happy I did so and have had many people ask me about it. I think the bright red really gives the i3 a more aggressive look, something I know that many i3 owners would like.

My red wrapped i3 next to an Andesite Silver one.

When I was first told that BMW was considering new color options for 2016 I (somewhat) jokingly asked if "Moloughney Red" would be offered sometime in the future. The BMW product manager quickly responded "Don't hold your breath, Tom" - with a smile. I may be partial, but I think it would go over pretty well if it were offered, what do you think?