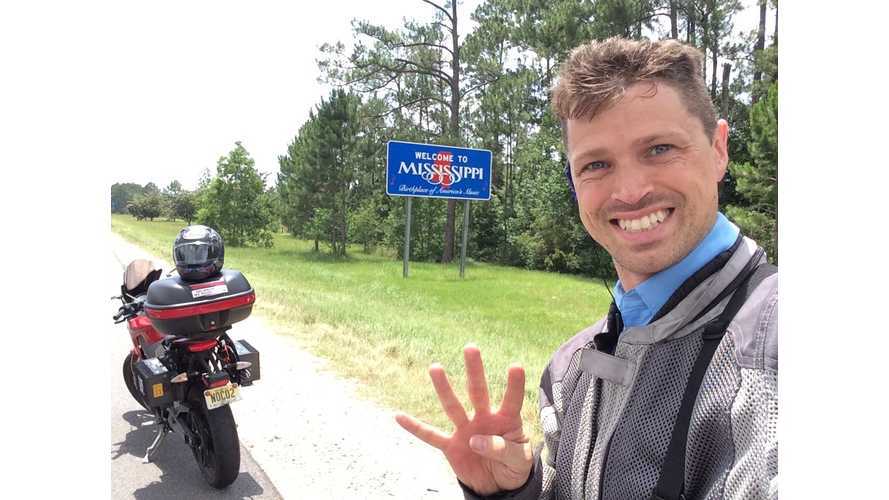 Alabama is the third new state I collected on this ride.

Rode through after a 17 hour ride yesterday that took me 454 miles, I gave myself an extra 45 minutes to sleep, so today I started at 8am instead of the usual 7am. I thought it would be a relatively easy day, but soon discovered that traveling by EV on Sunday has different rules.

The ride started off just fine with a stop at Sandy Sansing Nissan in Pensacola. Nobody was there since it was Sunday, but that's no big deal. However, I had to walk quite a distance to find a restaurant that was open. There's nothing like starting your morning at Whataburger.

Then off to BMW of Mobile to charge at a Chargepoint station and better food options at McAlister's Deli with Wifi and a place to plug in. At every stop I'm looking for a place to plug in my computer, phone & camera, Wifi and food. This was a great spot!

After that I took another short hop to Pat Peck Nissan in Gulfport, and this is where it gets interesting. There are 2 more Nissan dealers between Gulfport and my destination, however they both have gates to close their lot after hours. Being on a motorcycle I could probably find a way to ride onto their property and get a charge, but that's not the kind of person I am.

NESTE attempt to cross the USA on 1 tank of biodiesel passed me on I-12 just north of New Orleans.

Louisiana is the fifth new state I collected on this ride.

So I called a couple of RV Parks. The first one wanted to charge me $10 to plug in for an hour. I'm okay with paying $5 for $1.50 of electricity, but $10 is a bit of a stretch. Then I called Callahan RV Park in Callahan,LA and they let me charge for free. I have met the nicest folks at RV parks, both owners and people staying there.

I'll always remember Callahan, LA as a place with a nice RV Park and a gas station decorated with deer heads mounted on the wall.

Met my friends at a restaurant where I had some traditional cajun food including white chocolate blueberry bread pudding. Now THAT's how you end a day!

Map of my ride through the gulf states that took 11 hours.

Map of all the states I have gone to on a Zero electric motorcycle.