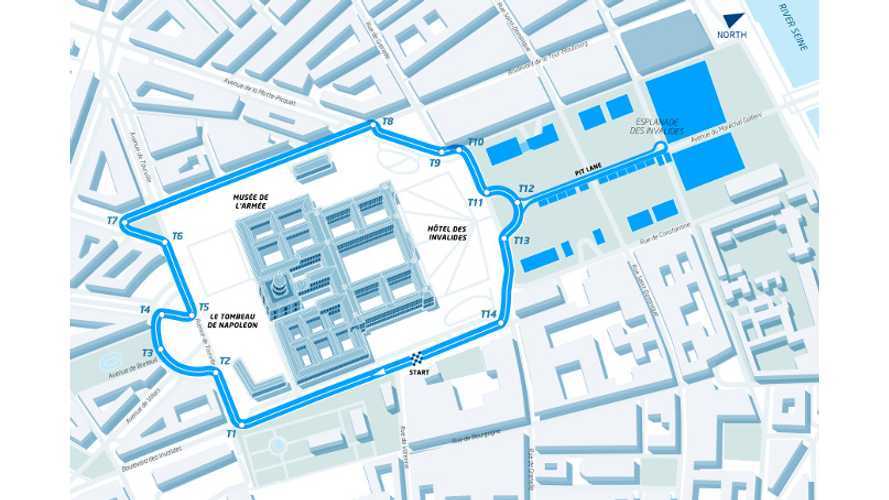 FIA Formula E Championship unveiled the circuit layout for the Paris ePrix around the architectural complex of Les Invalides.

The first such electric race in France will take place on April 23, 2016 as round seven of this year.

If Formula E racing around the Tomb of Napoleon is something that interests you, the early bid price for tickets will start from €25.

"The 1.93km circuit, which remains subject to FIA track homologation, was unveiled in front of a gathering of assorted media, government officials, local authorities and distinguished guests at the Hotel de Ville in Paris."

"With 14 turns winding its way past the Army Museum and the Tomb of Napoleon, the track is located in an amazing setting, combining historical monuments with visions of the future. As a pioneer of electric mobility, the race in Paris will provide a logical follow-up to the COP21 agreements achieved in the same city last year."

“As a series we are fortunate enough to race in some incredible locations but none more spectacular than the backdrop in the city of Paris. The ethos of Formula E is urban racing in the heart of cities around the world - Paris certainly ticks all those boxes. France is also a key market for the championship as the home of the FIA, Official Founding Partner and Tyre Supplier Michelin, and team partners such as DS and Renault. The Paris ePrix will be an iconic setting for Formula E with DHL, the championship’s Official Logistics Partner, delivering the first fully-electric race to the French capital.”

“Paris is very proud to welcome the first ePrix to France. This event will be treated like a popular party, which will link sporting values and the environment. It will be a very nice way to promote electric mobility to a massive audience which is a priority for Paris.”

“The Paris ePrix is a chance, not only for Paris but also for France. On the environmental side, sporting side but also for the projection of our country abroad. We will see on April 23 a great event, where the Parisian heritage, the French know-how and our capacity to organise big sports events again be valued.”

“The FIA is particularly pleased that there will be a Formula E race run through the streets of the centre of Paris, the city that has been our home for over a century. This series is heavily linked to the development of new technologies and to promoting a new model for sustainable mobility. It is entirely logical therefore, that a country like France, that has always been at the cutting-edge of innovation, should host an ePrix in its capital city. I am sure that the spectacle offered by Formula E on a track laid out against the amazing backdrop of Les Invalides, will make this event truly unique among motorsport events at a world level.”