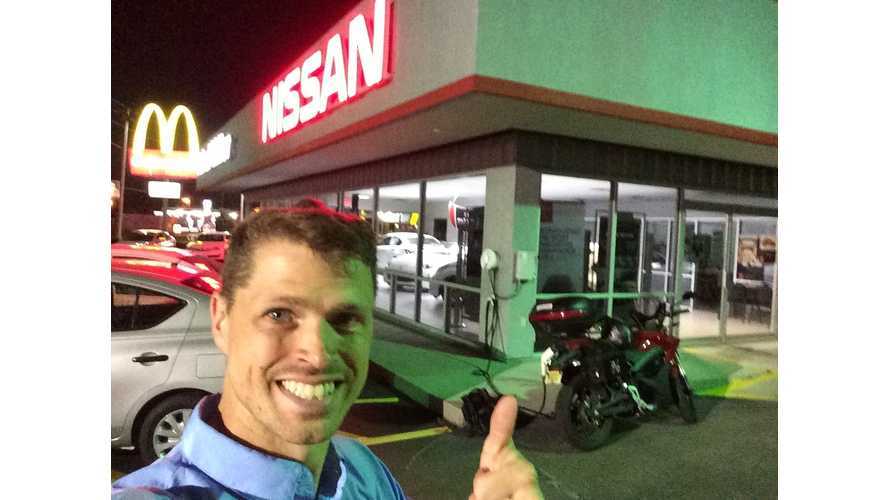 Todays ride featured I-95 and I-10 from Titusville to Jacksonville past Tallahassee to Defuniak Springs, FL. Early in the day I stopped at Fields BMW of Daytona for my first charge and they already had their i3 plugged in. Apparently 2 vehicles charging was too much for their circuit, and it tripped the breaker switch. So I lost a half hour of time while the station was off and my bike wasn't charging. However, I happened to check the Chargepoint App and noticed something was wrong. The BMW guys flipped the switch, unplugged the car while I was there, and let me charge at full speed.

Then I headed to Jacksonville to meet up with fellow Zero SR owner Bill Bortzfield. We had a great lunch at the Jacksonville Waterfront at an Irish pub. Then we got the chance to ride together for a short time as I made my way west on I-10.

Riding with Bill Bortzfield in Jacksonville.

The rest of the day included riding along I-10, which is boring, and charging at Rountree-Moore Nissan in Lake City, A Stone's Throw RV Park in Drifton, then Rahal-Miller Nissan in Marianna, FL. Not much interaction at the last three charging stations. I guess people would rather not be at work on Saturday.

Now it's time to get some sleep before visiting friends in Louisiana. Wonder if I'll wrestle an alligator?

Charging in the hotel meeting room at the end of the day.