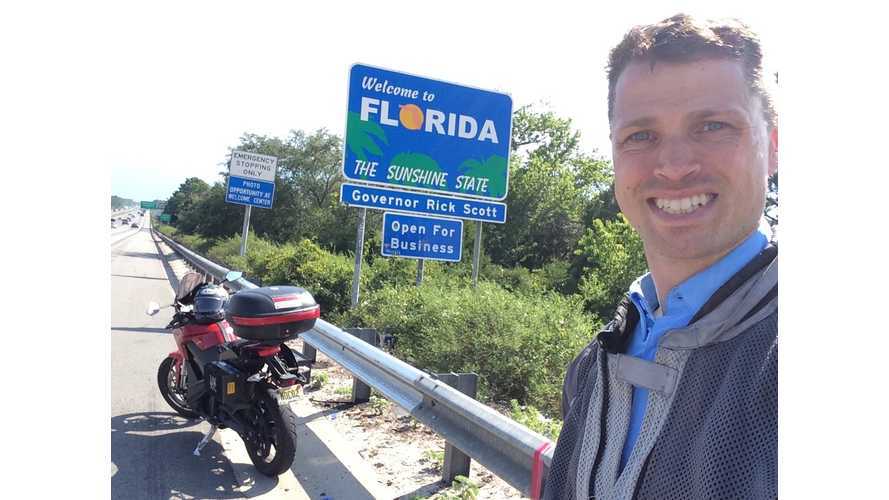 Spending the day on I-95 is not my idea of fun. Also, I believe the thermometer was at "Holy Heatwave, Batman!". So it was very hot and I had to ride over 300 miles on the highway today. Fortunately the day was filled with good experiences and only a little mishap.

Traveling from Charleston to Savannah, GA was uneventful and I was excited to have a charging station that was near shopping and food. Well, it was near shopping but not near food. The Tanger Outlets near Savannah have plenty of shopping, but no place to eat a meal. I ended up buying some Under Armour clothes to help deal with the intense heat, which turned out to be a great idea. Then I walked a mile to get some food. I find that having charging stations near food is the best place for them.

The next stop was in Brunswick, GA at a Nissan dealership that also has a CHAdeMO station. CHAdeMO stations are fast chargers and if my bike could use that it would have charged up in half the time. The folks at Jenkins Nissan of Brunswick were super nice and made me feel at home. While all was well inside, something was amiss outside the air conditioned dealership. It was so hot that the temperature sensor stopped the bike from charging. I didn't find this out for about 15 minutes, but I had enough charge to make it to Jacksonville. I put the bike in the shade for a few minutes and doused the battery box with water to help it cool. This little setback cost about half an hour.

Riding to Jacksonville went smoothly and the charging station was near the waterfront where lots of restaurants are nearby. Had a delicious meal at Fionn MacCool's and the waiter was both a Whovian and a browncoat. What luck!

A huge storm system in central Florida cooled down the temperature, which helped me stay more alert and helped my battery stay cool. I left Jacksonville at 7pm, exactly 12 hours after my ride started to get to a Daytona Beach hotel to charge one last time. After charging at the Country Inn & Suites I made it to my parents' house at 11pm.

Now it's time for a much needed rest day. Riding is great fun, but it can be fatiguing and my body feels a bit beat up from fighting the wind all day.