Audi A3 e-tron On Sale At U.S. Dealerships Starting Today 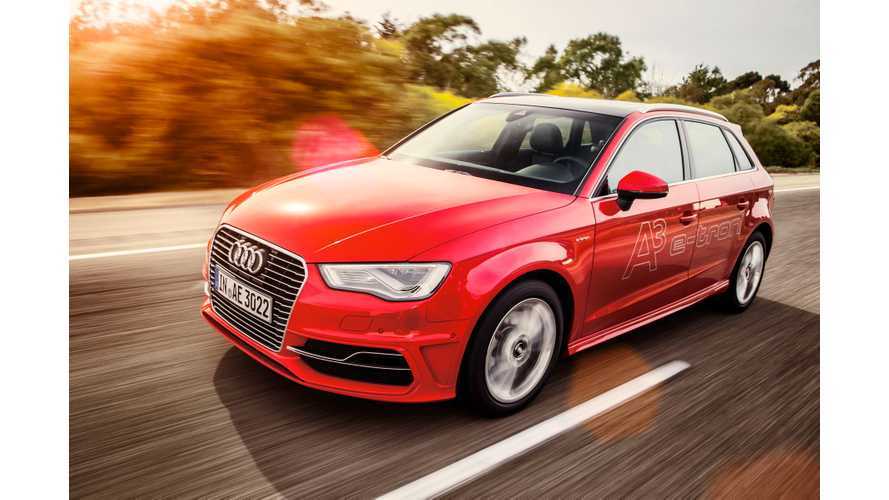 Audi Has Been Giving Out Test Drives With The A3 e-tron In The US - But Not Actually Delivering Them (InsideEVs/ M. Beinenson)

Audi of America has confirmed via Twitter that today is the day when U.S. dealerships will receive/ be able to sell A3 e-tron plug-in hybrids - although we spotted the first one in Colorado over the weekend.

This marks the start of U.S. sales for Audi's first plug-in hybrid.

The oft-delayed A3 e-tron was supposed to go on sale in the U.S. in late October of last year, but apparently some CARB certification issues pushed back the launch by a few months; of which, the e-tron just passed those US regulatory hurdles in the last couple days of December 2015.

And while some might think the A3 e-tron is a fringe offering, given its 17 miles EPA-rated range, they would be wrong.

The A3 e-tron is a significant step forward in the overall electrification movement in the United States, as it not only gets a plug-in vehicle inside another national automotive brand/dealership chain (and all the eyeballs that come with that), but also that decent sales are practically guaranteed, as the MSRP after rebates is within $3,000 of the base model ($~$33,700 vs $30,900 base).  Inside a lease, the plug-in option will be cost neutral.

The A3 Sportback e-tron is a far more desirable package than the standard entry level, and as it has a price competitive with the bottom of the entire Audi lineup, we would not be surprised to see a good portion of existing A3 sales be converted to the plug, as well as new customers arriving to the brand.

Provided Audi inventories and promotes this vehicle as it has the standard A3, selling 500-1,000 every month does not seem unreasonable to us.  We certainly know that, thanks to the delayed start of sales, Audi already has enough of them penned up in stock today to give it a decent starting push.

Detailed specs on the A3 e-tron can be found here. You can check out or first drive review of the plug-in A3 here.