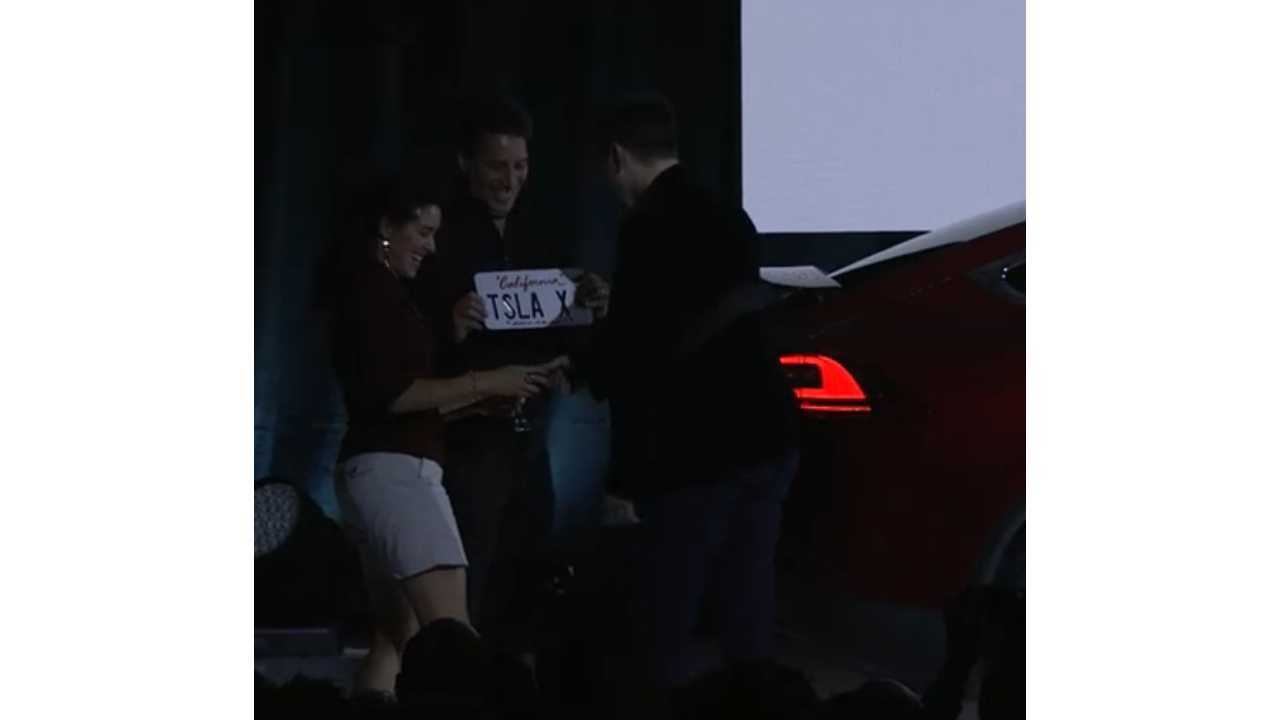 Not too far from Tesla's Fremont assembly plant that has been building the Model S for some time now, the company has officially launched it's all-electric SUV - the Model X.

Specifically, Tesla introduced the EV from a newly leased, 502,000 square foot facility just down the road,  that was previously occupied by Solyndra.

Note: At top you can find the livestream feed (and replay) in its entirety from the event

Tesla CEO Elon Musk Takes To The Stage To Launch The Model X On Tuesday!

The Model X presentation was a little slow in starting (about 45 minutes late at 8:45 Pacific), but did deliver on expectations before it was over.

Eventually, the Tesla CEO kick off the program on the main stage, along with a new production Model S.  Ultimately, Mr. Musk would lead the entire program.

During the event the Tesla CEO also gave away the keys to the first 6 Model X EVs, well, 5 if you don't count VIN #001 to himself.  Board member Steve Juvertson (who already owns Model S #001), was recipient of X #002.

Mr. Musk kicked off the presentation with some statements how the Model X is now the safest utility vehicle on the road, thanks mostly to the Tesla's low center of gravity, and reinforcing strength of the battery during testing.

"The mission of Tesla is to accelerate the advent of sustainable transport.  As you guys know, it is incredibly important that we move to a sustainable world, sooner rather than later.  The sooner we do it, the better it is.  It is important to show that any type of car can go electric."

Tesla Model X Side Impact Intrusion Vs "Next Best" SUV

After a safety primer, Mr. Musk moves to the filtration system in the X, which provides an unprecedented amount of protection from the outside elements - like for instance a high emission emitting diesel vehicle?  The VW diesel emission scandal of late featured prominently in the presentation.

Why do you need a serious filter system, Tesla put up the following slide (below) indicating the "least bad thing" that would happen if you lived in the following cities:

Tesla says the Model X filtration capability can be up to 800 times better "on a bad day" in certain situations that some of today's vehicles.

We do have to note, there was no mention of the frequency of maintenance needed on this system to continue to operate at such a high level, or the costs associated with it.  We suspect this level of medical-grade ("hospital operating room") cleanliness doesn't come cheap.

The Tesla Model X has two typical modes of vent filtration, and one not-so-typical:

"In fact, when the car is operating at maximum capability, so if you press 'max' capability, we can't even detect any viruses or bacteria or spores, so it's like zero come through.  So, if there is ever, sort of an apocalyptic scenario of some kind, hypothetically you just press the 'bio defense mode button'  - this is a real button. (snickers) ...yeah, we are trying to be a leader in apocalyptic defence scenarios"

Tesla "Bio Defense Mode" Button. The CEO Loves His Fancy Buttons! (We do too)

Touch The Outside Of My Car? You Have To Be Kidding Me

For the front doors, they are unexpectedly "auto presenting":

"So, what it will do, it will triangulate my position.  And detect that I am moving towards the front door.  It will open the front door, without me touching anything.  I will sit down.  And it will close the door - like an invisible chauffeur."

And as most reasonable people would have expected in regards to the Falcon Wing doors, they worked flawlessly; with no added fiddling or prodding necessary.  The finish and alignment (at least during the presentation) seemed perfect as well.

As to the functionality of the Falcon Wing doors, Tesla rolled out a couple minivans, parking them within a few inches of the Model X before activating the doors.  The CEO states the solution for easy entry in tight situations was "the best out there".

After demonstrating the advantages to the Falcon Wing door when it comes to access, the CEO also touted the power sliding abilities of the 2nd row, and how easy it was to enter and exit into the third row behind them.

As for towing, we already know that the Model X is rated to pull 5,000 lbs, but watching a black Model X pull out a shiny new airstream and a pile of humanity, all on electricity is still pretty impressive.

Model X Hits The Stage With A Airstream, A Bunch Of Passengers And Some Luggage

As a point of interest, we reported a few days ago that the EPA range data on the Model X has already been released - at least in regards to the 90D and P90D variations.

During the presentation, no mention of any other trim levels were brought up (70D?), but the CEO did mention that the 70D had "quite high performance" and would be capable of hitting 60 mph in about 4.8 seconds, while the P90D would take just 3.2 seconds.

We didn't get a good look at the frunk in the presentation, but here is an earlier picture of the huge storage bin on the front of Model X from earlier!

Before wrapping up the event, Musk gave away the keys to six new Model X Founder Edition SUVs (technically 5, as VIN #001 went to himself).

And that's the event!

"Thanks! Have A Good Night!"

So by the end of the presentation, we were still left with more than a few unanswered questions.  What of a 70D Model X?  Pricing on the non-Signature/regular editions?  Release date for 'average' customer's to configure their own Model X? etc., etc.

Over the time of the event we did learn that Mr. Musk said new orders today will be delivered in 8- 12 months, and that the company had 20,000-25,000 live pre-orders on the books to work through.

But we suspect all those questions will be answered very shortly, away from the ceremony itself.

Built electric from the ground up, Model X is designed to be the safest car on the road. Our crash tests indicate that Model X will receive a 5 star safety rating in all categories, the first SUV to ever do so.

Not needing a big gasoline engine under the hood, Model X has a large crumple zone to absorb the energy of a high-speed impact. The battery's location on the floor gives Model X an extremely low center of gravity, reducing the risk of rollover common in most SUVs. Aluminum pillars reinforced with steel rails protect occupants and the battery while improving roof stiffness.

Model X comes standard with automatic emergency braking and side collision avoidance to prevent accidents from happening in the first place. Tesla makes the only standard AEB system that works at high speed.

Model X is the world's cleanest SUV on the inside, too. The front fascia is designed with a functional duct that pushes air through the first true HEPA filter system available in an automobile allowing medical-grade air to fill the cabin, no matter what is going on outside.

Model X Falcon Wing doors offer unprecedented convenience, entry, and maneuverability for everyday life. They provide seamless ingress and egress into the second and third row. No longer do parents have to cantilever themselves to avoid hitting their child's head on the roof as they place them in a car seat.

The double-hinged Falcon Wing doors open up then out, requiring only 30 cm of space on the side of the vehicle. Each door is equipped with capacitive, inductive, and sonar sensors to monitor surroundings and avoid contact with obstacles around the car, making it possible to park in tight spots.

The industry's first auto presenting door automatically opens and closes as the driver approaches or exits Model X. Why should the driver ever need to touch the door?

Monopost seats move independently, sliding and tilting forward and back. They allow passengers easy access to the third row and give them plenty of foot room when they sit down.

The windshield in Model X stretches up and over the front seat occupants. Second row passengers get a first row vantage point with an expansive view ahead, atop the falcon wing door, and beside them. The windshield's solar tint transition completes the modern and open feel.

The 17" center touchscreen seamlessly integrates media, navigation, communications, cabin control and vehicle data into one intuitive interface. Many functions are mirrored on the instrument panel and are voice-activated to focus the driver's attention on the road.

Whether big or little, there's a place to store it in Model X. Side pockets, a center console and a blind holster for your iPhone.

Model X provides unprecedented space for passengers and cargo. With three rows of seats, a front and rear trunk, and room under the second row seats, there's ample room for people, luggage, and big things like surf boards and bikes. For even heavier cargo, Model X is the first electric vehicle with a 5,000 lb. tow capacity.

At the heart of the vehicle is Tesla's proven electric powertrain, accelerating Model X from 0-60 in a staggering 3.2 seconds and hitting a top speed of 155 mph, all while producing zero emissions.

At 0.24, Model X has the lowest drag coefficient of any SUV in history.

Model X comes standard with an active spoiler that automatically adjusts to three positions for maximum visibility and efficiency. Under 45 mph, the spoiler is positioned so the driver can see above and below it. At higher speeds the spoiler partially retracts for improved highway efficiency (+1.6%), and optimizes the vehicle's lift distribution. Model X is the only car with an active spoiler equipped with a center-high-mounted stop lamp (CHMSL).

Dual motors digitally and independently control torque to the front and rear wheels to give Model X unparalleled control of traction while increasing performance and efficiency.

Signature Model X comes with a 90 kWh battery providing customers a driving range of 250 miles on a single charge.

The Verge already has a first drive "in the bag"/embargoed before the launch completed, which you can watch now!