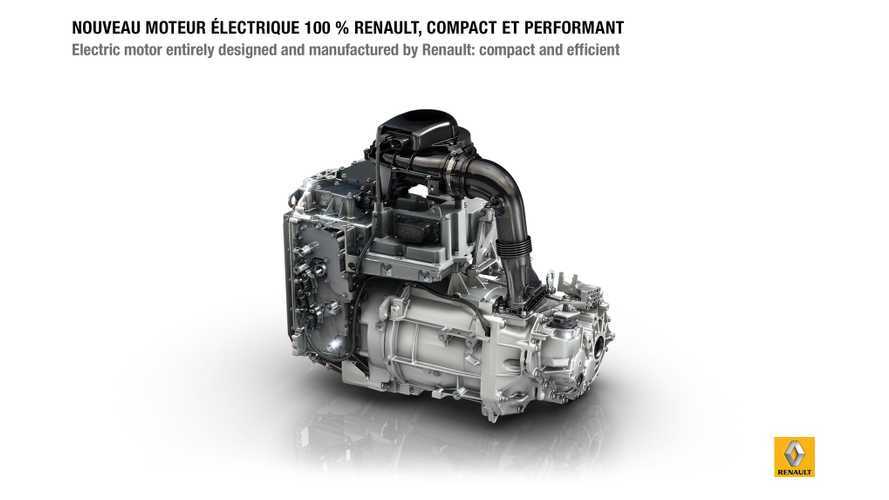 Recently, the French company released a set of photos and videos from production site in Cléon, France.

Be aware that descriptions of the photos are still stalled in the bygone era of "engines".

Until now, the flagship of the Cléon plant was the Energy dCi (130, 140, 160) internal-combustion engine. The diesel unit with advanced technological content has made a name for itself at Groupe Renault, the Alliance and with our partners. It will now be sharing top billing at the Normandy plant with a technically dazzling younger brother, the R 240, a 100% electric and 100% Renault motor to be fitted on ZOE. The motor-battery set increases the versatile electric car’s range by 30 km to 240 km (*).

(*) Range homologated according to prevailing standards.

The launch, benefitting from a part of €300 million investment announced by the plant in 2011, is an integral part of Renault’s electric strategy aimed at improving motor and battery technology to optimize the performance and range of electric vehicles, while supporting the development of the corresponding infrastructure.

“We aim to become the leading powertrain plant for the Alliance,” says Mendi Ammad, Director of the Cléon plant."

"Why was Cléon chosen for the new motor?

With the requisite size for taking on such a project, Cléon was chosen for two reasons: its production base and its engineering and operational teams.

Cléon’s production base has been enhanced through an ingenious example of carryover, consisting of the reuse of existing production resources reconfigured for new needs. Out of the 260 machines and inspection systems installed for the industrial development of the R 240, over 50% were already in place. The review of the reuse and adaptation of this equipment for the new product was led by the Production Engineering department. The equipment was then converted and reconditioned, in part or in full, by the Tooling teams at Cléon’s Maintenance department – a benchmark at the Group. This approach helped to limit investments by nearly 40%, with no compromises on quality. The remaining 50% of the equipment consists of new machines, some of them with innovative technologies, for which new suppliers were called on."

Cléon also has engineering and operational teams with the size needed to absorb a project of this nature and acquire the relevant skills. All the function experts are on site, for better communication and greater responsiveness. As part of a design-to-cost approach, the teams at Cléon helped the engineering center to choose the most suitable parts in terms of ease of production and cost control.

A 6,000-hour training plan was launched in 2012 for the industrial development of the R 240. The plan includes general classroom training on the electric motor for everyone involved in the project and technical training on the machines, working together with the suppliers, for operators and maintenance staff."

For a little over two years, the Cléon plant has been harnessing its expertise to produce ZOE’s junction box, developed by the Technocentre engineering center and connected to an electric motor hitherto sourced from a supplier.

Cléon has developed complete mastery of electronic module assembly and built up robust experience in the production of the power electronic control (PEC) on the R 240. For example, the floor of the junction box assembly shop was covered with a “conducting” coating that grounds employees wearing special safety shoes. An electrostatic discharge (ESD) test machine (via shoes) has been set up at the entrance of the shop, verifying the electrical resistance between an employee’s hand and the floor. Also, all personnel entering the premises are required to wear a special anti-ESD suit. These measures and initiatives have been taken in the PEC assembly shop because electrostatic discharge can damage the components. The highly manual PEC assembly line requires considerable meticulousness given the diminutive size of the 180 components in question. Three types of test – static, sealing, dynamic – are carried out on 100% of the PECs to verify some 20 electrical criteria."

With power electronics under control, the teams were able to devote their energy to other areas, such as rotor and stator winding.

For comparable common components between Renault and Nissan, the process functions took their inspiration from the experience of Nissan, which produces its own motor for the Leaf.

Cléon also benefitted from the process expertise of local companies based 30 km from Cléon that produce electric motors for other applications. Discussions were organized on production line and assembly concepts and on the precautions to be taken with certain machines. Renault was able to share technical information, which enabled it to define its industrial model.

The rotor and stator are key innovations essential to the electric powertrain and requiring a ramp-up in skills on new technologies at Renault. In 2011 Cléon purchased its first rotor and stator winding machines for the plant’s Prototype department. This proved a considerable asset when selecting the technologies and suppliers for the winding machine, in preparation for high-volume production.

Renault selected a winded rotor – an innovative process for the Group. This technical choice, together with the choice of winding technology, serves to improve the performance of the motor and the vehicle range.

The stator line is home to the greatest number of innovations in terms of processes. The winding, lacing and impregnation operations required prior engineering studies and complex development processes. Several hundreds of meters of copper wiring are used on each stator.

Right from the start of the project, Cléon factored industrial diversity into the purchase of machines in terms of minimum and maximum dimensions. As a result, the assembly lines are able to produce engines with different dimensions for other Group vehicles or partner vehicles. Ramp-up was designed to take account of process innovations and the acquisition of skills by the operational staff."

The motor assembly line features a number of process innovations, including the mating of the motor crankcase to the wound stator – an operation that was reviewed and validated in the prototype phase. The plant carries out two types of bench test, one with an empty vehicle to check functionality at several engine speeds (culminating at 10,000 rpm), the other on a dynamic bench, with occupants, to simulate real driving conditions.

The final assembly line assembles the three sub-assemblies – the PEC, the reduction gear (mini-gearbox) and the electric motor (crankcase with rotor and stator) – to form the electric powertrain. For the first time, a final test of the entire powertrain is carried out at the end of the assembly line on 100% of the production in conditions similar to those in vehicle use.

Initial installed production capacity for the R 240 is 50,000 units a year. The plant is configured to produce twice that number in the long term."