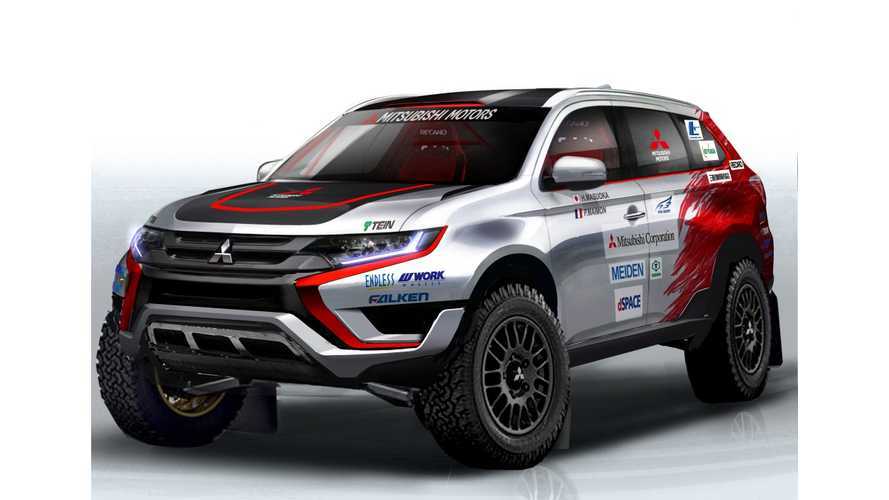 Mitsubishi announced participation in Baja Portalegre 500 cross-country rally, which will be held in the Portalegre municipality in the eastern part of Portugal October 22 through October 24 this year.

As you can see in the photo, the Japanese company intends to use an all-new version of the Outlander PHEV, which will be specially modified for the 500 km (310 miles) rally.

Dakar Rally winner Hiroshi Masuoka will sit behind the wheel.

"Since its inception in 1987, the Baja Portalegre 500, which celebrates its 29th edition this year, is a cross-country rally organized by the Portuguese Automobile Association. Contestants will be driving approximately 500 kilometers mainly at the high speed over rather flat but dirt roads. The course provides the arena for the 9th Round of the FIA Cross Country Rally World Cup and is known as an event in which rally aces from over the world participate each year as a warm-up to the Dakar Rally, the world's most punishing event of its type. This competition is organized in three categories - automobile, motor bike and quad – with over 300 vehicles expected to take part.

Based on the production model but with modifications required for a rally car, the Outlander PHEV has been entered by MMC to promote development of EV and 4WD technologies. It uses the production model's drive battery – which forms the heart of a plug-in hybrid vehicle – but with modifications to its structure to realize greater capacity and output. The control system governing the motors has been modified to deliver a higher output. In addition, the generator and engine which supply power to the battery and motors have been modified to increase power output and boost overall system performance.

As to the body, in addition to the fitting of a roll cage and other safety equipment, off-road performance has been improved in order to take full advantage of the upgraded PHEV system. Detail changes include a higher ground clearance and longer suspension stroke together with larger diameter rally tires. These changes will enhance the Outlander PHEV's performance limits under punishing rally conditions and the valuable data gathered during the event will be fed back into the development of production cars."

"Well, here we are entering the new Outlander PHEV in the Baja Portalegre 500. This car has received popular reviews both in Japan and Europe for its smooth and stable driving dynamics which stem from its Twin Motor 4WD driveline. The Baja Portalegre 500 requires competitors to complete the 500 km course non-stop, apart from some 20 minute service times, over everything from high-speed gravel to punishing 'yumpy' roads. For a PHEV, this demands the highest levels of drive motor and battery durability. With many competitors in this year's Baja Portalegre 500, I am driven to show the rally Outlander PHEV's high levels of driving dynamics and durability which derive from the production model to people from all over the world. With the support of MMC EV development engineers, we will be competing with a view to finishing among the winners using this event as an opportunity to demonstrate the upgraded power of its EV components alongside the advance stage of development of our 4WD control technology aiming to develop plug-in hybrid EV system further in the future. I ask you all to support our efforts."

Before Baja Portalegre 500, Mitsubishi will try Outlander PHEV in the FIA Asia Cross Country Rally 2015 in Thailand on August 14.

"The Asia Cross Country Rally 2015 celebrates its 20th anniversary this year. Entrants will have to compete over a punishing 2,500km and mountainous route which starts and finishes in the ancient city of Chiang Mai in the north of Thailand. For this event where the same specification Outlander PHEV competing in the Baja Partalegre 500 will be used, the Two & Four Motor Sports team will be aiming to have finish among the winners, on the back of knowhow gained in the last two years."