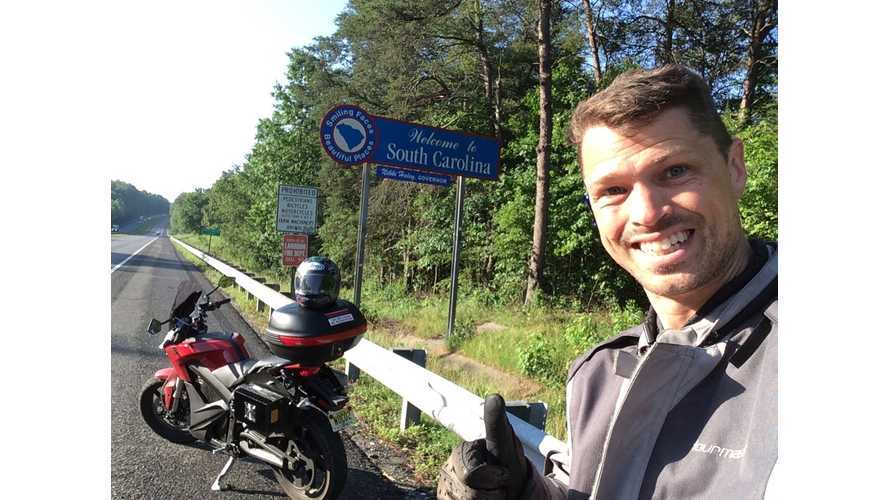 Leaving Asheville I needed an external hard drive because my computer was full. I couldn't copy photos or videos (videos will return soon...), but I start my day at 7am and they don't open until 10am! So no luck to start the day. I went to Spartanburg to charge and found a Best Buy near there and picked up a hard drive there.

Then I noticed that Union, SC was nearby and I had been there before. Two years ago I went across the country on the Ride the Future Tour and we made the movie Kick Gas. The tour started in Charleston and ended at Google HQ in Mountain View, CA. Well, our first stops were at Orangeburg Nissan and Union, SC. We even met the mayor of Union!

I went to see if I could get an audience with the mayor, but he happened to have stepped out just before I got there. However, the receptionist remembered me and we caught up on the happenings of the past two years.

Then I went to Orangeburg, little did I know that i would have great difficulty leaving. I left my motorcycle charging at the Nissan dealership and ate at Fatz restaurant. During that time the bike stopped charging at 52%! When I plugged it back in the circuit would trip and restart.

After about 3 hours of trying different charging and restarting the bike and talking with Zero support, we finally figured it out. I had to let it slowly charge to full so the 2 different battery packs in the bike (the main battery and the power tank) could equalize. Somehow their voltages got out of whack. I'm pretty sure I understand why, but it doesn't bear repeating here. I can avoid that in the future pretty easily.

After that adventure I finally made it to my destination, the Prohibition Lounge in Charleston for some live music, craft drinks and dancing! Had a great time dancing with the locals and made it to my hosts house at midnight. Time to get some shuteye and go big tomorrow. Tomorrow is a 400+ mile day!