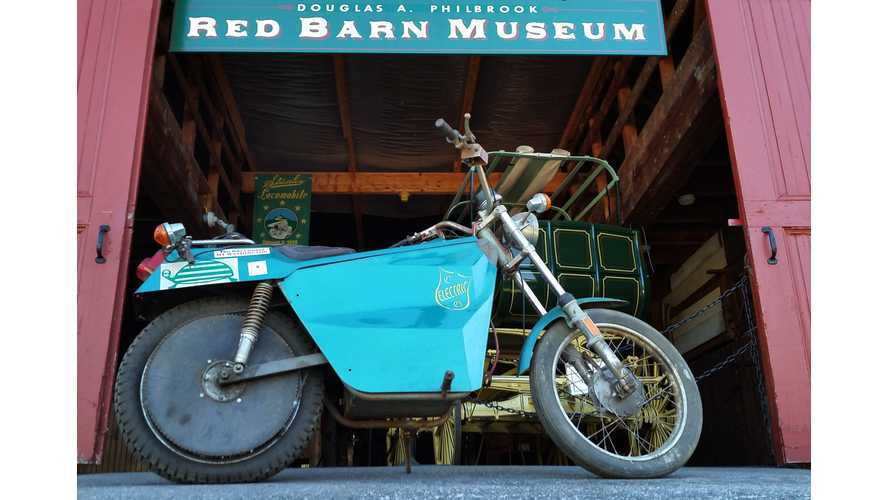 This weekend, the Corbin XPL-1 electric motorcycle that made the record-setting first EV ascent of Mount Washington in 1974 came home.

The bike was ridden by Charles MacArthur, traded for a hot-air balloon with EV and motorcycle legend Mike Corbin, and was the first electric vehicle, as well as electric motorcycle, to make it to the top of the highest mountain in New England.

Here's a bit from the original press release:

Charles MacArthur on the summit of Mt Washington, 1974

DURING THE MORNING OF JULY 13, 1974, PROF. CHARLES E. MACARTHER, RIDING A CORBIN ELECTRIC MOTORCYCLE (XLP-1), ASCENDED MT. WASHINGTON, NEW HAMPSHIRE VIA THE AUTO ROAD, A DISTANCE OF EIGHT MILES WITH A MAXIMUM GRADE OF 18% AND AVERAGE GRADE OF 12%. A TOTAL CLIMB OF 4688 FEET. THIS WAS THE WORLD’S FIRST ELECTRIC VEHICLE ASCENT.

Take note of those numbers - the Mount Washington Auto Road is steeper than Pikes Peak, and has the same vertical climb.  It's also been around longer, just for the record.

The bike was a part of an extensive collection of electric vehicles, as well as assorted other alternative and micro-vehicles that were all a part of a giant two-day auction in Parker, ME this past weekend, liquidating the estate of MacArthur.  Among the collection was a Corbin Sparrow, SN #002, and probably one of the world's largest assemblages of Reliant Robins, the 3-wheeled microcar that MacArthur drove cross-country in 2003.  MacArthur passed away two months ago, as we reported in this story.

At this point, according to the Mt Washington Auto Road General Manager, Howie Wemyss, the bike is in excellent condition, and with some minor cleanup will go right into the collection in the Red Barn Museum at the Base Lodge of the Auto Road - along with the various examples of vehicles used as "Coaches" on the mountain, which afforded those who either couldn't, or preferred not to drive themselves to New England's tallest peak and the site of some of the world's worst weather a trip to the top.  The collection is a concise history of transportation, starting with the Stanley Locomobile that F. O. Stanley and his wife Flora drove to the summit in 1899 in a publicity stunt.

The bike was touted to have a top speed of 30mph and a 30 mile range, and had a simple on/off switch with a contactor as a speed control.  This model was the very first delivered, and apparently modified with an enormous rear sprocket - almost the same diameter as the wheel - to deal with the ascent.  You can see more about the bike here, on The Electric Chronicles.

Wemyss isn't planning on restoring or running the bike at this point, and the original flooded lead acid batteries have long since been removed, though he has been in contact with Mike Corbin for some more information and minor parts. Corbin's comment?  "Charlie was the cornerstone spokesman for modern day EVs , and a true lover of  "The Big Hill".  Charlie's memory with that little bike should be right there. I am very happy Charlie's bike will reside at Mt. Washington."