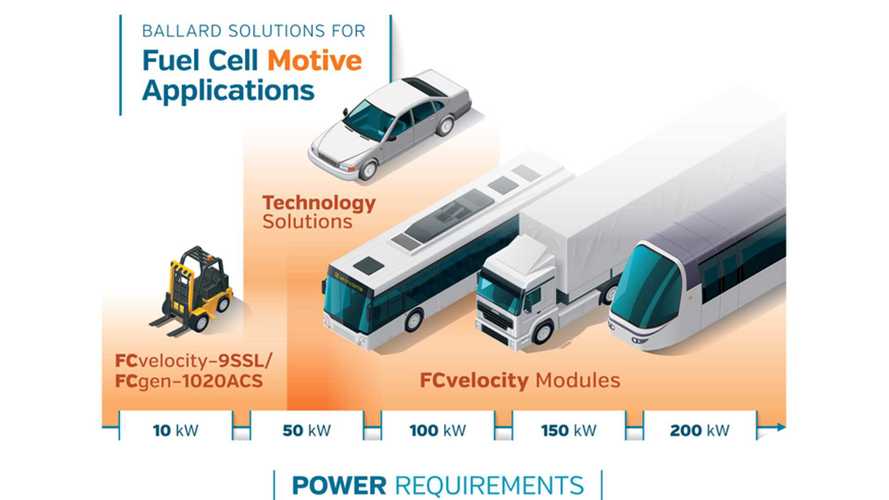 This largest-ever order comes from an existing partner in China - Guangdong Synergy Hydrogen Power Technology Co. The buses will be used in the cities of Foshan and Yunfu, China

Commercial deployment of 30/60 kW modules is scheduled for 2016.

"The deal has an estimated initial value of $17 million through 2016, with the opportunity for significant recurring royalties starting in 2017. The agreement includes supply and sale of fully-assembled fuel cell power modules, ready-to-assemble module kits, a technology license for localization of assembly, supply of proprietary fuel cell stacks and long-term recurring royalties leveraged to unit volumes of locally assembled modules."

“We are thrilled to have Ballard selected as the exclusive supplier of fuel cell technology for the largest ever global deployment of fuel cell buses. The Foshan and Yunfu governments are demonstrating strong vision and leadership by championing a collaboration model that addresses mass transit needs, supports air quality initiatives and contributes to continued economic development.”

“We are moving the Cities of Foshan and Yunfu into the future by adopting clean, quiet and economical fuel cell buses. And, we are pleased to have a strong consortium of partners, including Ballard, Synergy and Feichi Bus.”

“We selected Ballard, the global leader in fuel cell technology for buses, as our exclusive technology partner. Ballard’s flexible approach in developing a partnership model along with leading technical solutions that address the unique needs and opportunities in the Chinese market has been impressive. We look forward to localizing assembly of Ballard fuel cell modules in Foshan / Yunfu to meet the fast-growing demand for clean energy buses in China.”

“Foshan Automotive is a leader in the manufacture of clean energy buses in Guangdong Province. We see strong demand for low carbon solutions, and are excited by the opportunity to be first-to-market with a fuel cell bus offering. This deal represents a potential catalyst for further advancement and adoption of fuel cell buses in China.”

About the Ballard FCvelocity (see spec):

• Performance – The FCvelocity®-HD7 heavy duty zero-emission fuel cell power module offers superior performance based on Ballard’s proprietary fuel cell stack technology, demonstrating unmatched fuel efficiency, durability and flexibility to operate in extreme conditions that include cold as well as hot, humid environments. • Integration – A simplified and scalable design enables the module to be integrated into multiple transportation applications and the modular design of the air and cooling systems allow flexible and simple “drop-in” integration into vehicle drive trains. • Cost Reduction – The new FCvelocity®-HD7 power module features a reduced parts count, simplified design and lower parasitic load. Key components are manufactured with high-volume production processes, thereby reducing capital cost of the module and maintenance costs associated with parts replacement over the life of the product. Ballard’s HD7 represents a cost reduction of more than 30% from the prior generation HD6 product and a cost reduction of approximately 65% in this product line over the past six years.

• Leadership – The FCvelocity®-HD7 reflects Ballard’s unmatched experience in the field, including: more than 20-years’ supporting transit applications; production of more than 150 modules through seven generations of product; working with ten different system integrators and OEMs to power more than 100 buses in 20 cities worldwide; powering fuel cell buses over more than 7.5 million kilometers (4.7 million miles) and transporting more than 10 million passengers in revenue service.